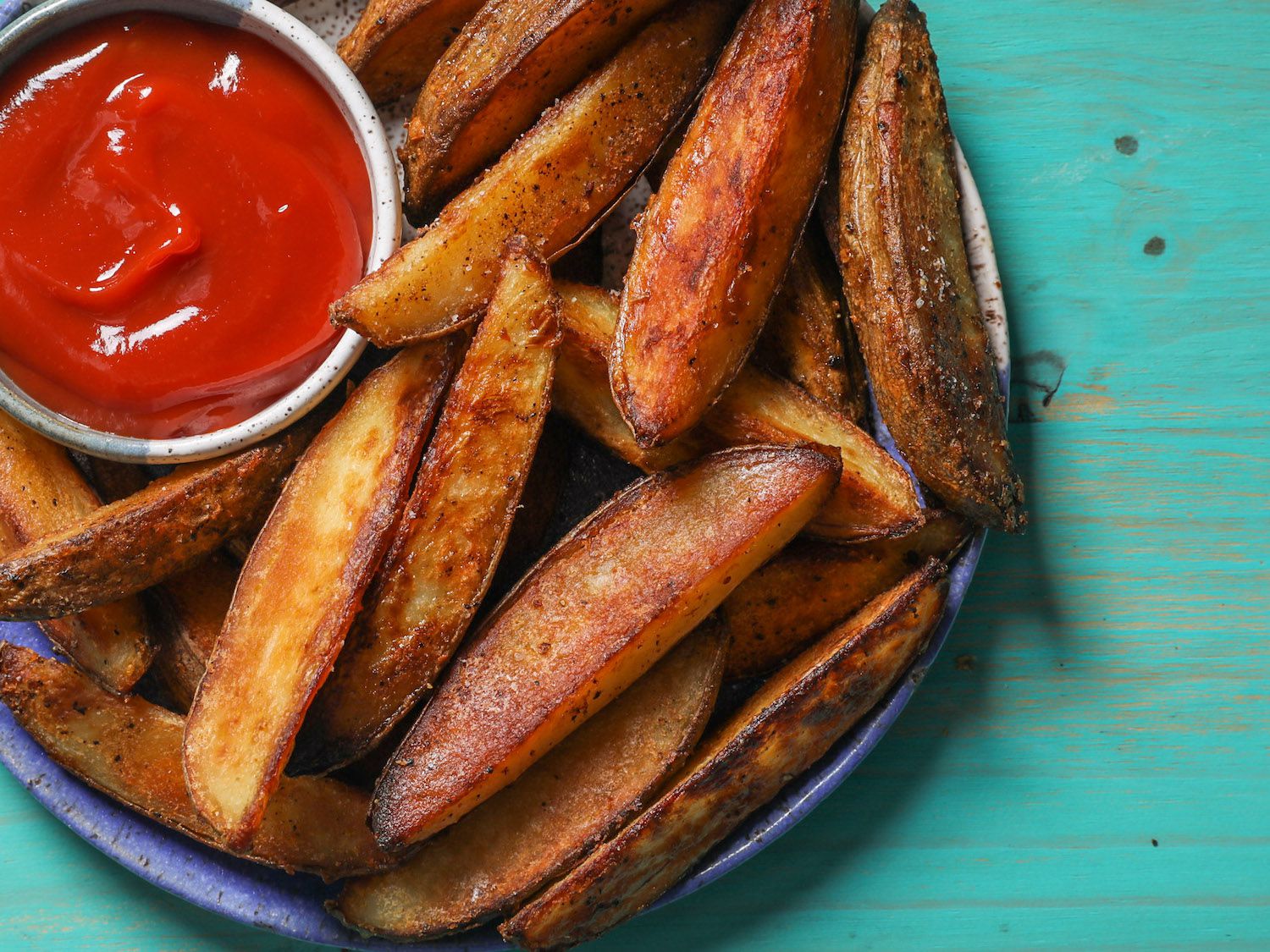 If restaurants priced menu items based on how much of a pain in the neck it would be for diners to make those dishes at home, French fries would quickly supplant caviar and blini as a special occasion splurge. I love a good fry, but that love quickly fades if I’m the one on the hook for the deep-frying and subsequent kitchen cleanup. It’s hard to justify the hassle at home, especially for something I can easily and affordably enjoy at all kinds of dining establishments steps away from my apartment. But what about the home-cooked meals that really could do with a pile of crispy, fluffy fries? Those offer air fryer evangelists an opportunity to make their case, and I’m not here to talk them down. For those of us who don’t have the space or budget for another countertop appliance, there’s the classic, although often underwhelming, oven-baked potato wedge.

Potato wedges usually feel like a concession of defeat, an acceptance of potato mediocrity. I know that jojos, the battered and pressure-fried wedges sold at chicken joints, have their diehard fans, but I’ve yet to encounter a devoted following for the oven fry. Part of that can be attributed to poor PR. Comparing oven-roasted potatoes to fried spuds is unfair: It’s impossible to achieve identical results from such vastly different cooking methods. But with the right technique we can come pretty darn close, and we can make potato wedges with a crunchy coating, and a tender, fluffy interior, without having to resort to deep-frying.

The simplest potato wedge recipes call for tossing raw pieces of potato with oil and seasonings, spreading them out on a baking sheet, and roasting them until golden brown. Unfortunately, this method doesn’t yield very good results. As with a French fry or classic roast potato, the time it takes for the center to be perfectly cooked through and the time it takes for the exterior to become well-browned don’t line up. You either end up with wedges that are underdone in the middle or desiccated on the surface. Par-cooking the wedges before roasting is a must.

Following Kenji’s blueprint for British-style roast potatoes seemed like the logical course of action here. Par-boil potatoes in alkaline water to help break down the surface of the wedges, then toss them aggressively in a bowl to rough them up and develop a starchy mashed-potato like coating that crisps up when roasted. With smaller chunks of potato, this method works like a charm, but during early rounds of testing, too many of my wedges ended up breaking apart into potato debris.

I tried a gentler approach, scraping the surface of the blanched potatoes with a fork to develop the starchy coating rather than tossing them in a bowl. This felt too fussy, but it also didn’t produce the kind of crust I was after. Next, I tried coating raw and blanched wedges with potato starch and cornstarch slurries to see if they could provide the right crispy exterior. They certainly achieve crispy results, but the starch slurry coatings had an artificial glassy feel that felt out of place and contrived for what should be a straightforward side.

I returned to our roast potato method, with a simple alteration: I cut down the initial blanching time as much as possible, simmering the potatoes just long enough to soften their surfaces, but keeping the center firm enough that the wedges could withstand a little rough treatment. Seven minutes did the trick, which gets the wedges to the texture of a firm poached pear in the middle. After tossing them to develop that coating, I arrange them on a generously oiled baking sheet. Spreading oil on the baking sheet, rather than tossing the potatoes with fat in the bowl, gives the wedges a more fry-like crust, as the pieces cook in an even layer of oil in the oven. To ensure that the oil is distributed evenly on the baking sheet, I borrowed a trick from my former colleague at America’s Test Kitchen, Lan Lam, who found that spraying a baking sheet with nonstick cooking spray before coating it with oil kept the fat from pooling on the tray. The lecithin in cooking spray, which acts as a surfactant, keeps the oil in an even layer.

All that I had left to do was roast the potatoes on high heat until browned on one side and then flip them onto their second flat side and cook them until golden brown. With Yukon Golds, the interior reaches a pudding-like creaminess that doesn’t translate well for an oven fry. But with russets, you get the perfect balance between a crunchy shell and a tender fluffy interior. It may not be a true fry, but it’s pretty, pretty good.

Adjust oven rack to lower position and preheat oven to 450°F (230°C). Spray a rimmed baking sheet with cooking spray. Pour oil over baking sheet and tilt until evenly coated with oil. Using a sharp knife, halve potatoes lengthwise. Place potato halves cut side down on cutting board and cut lengthwise into 1- to 1 1/2-inch-thick wedges (3 to 4 wedges per half potato, depending on size).

In a large pot, bring water to a boil over high heat. Add salt, baking soda, and potatoes and stir to combine. Return to a boil, then reduce heat to a simmer, and cook until potatoes are barely tender, offering some resistance when poked with a paring knife or cake tester (the texture should be similar to that of a firm poached pear or lightly cooked apple), about 7 minutes from when potatoes are added to the pot. Drain potatoes, taking care not to break the wedges, and transfer to a large bowl.

Season potatoes with salt and pepper and toss to coat, shaking bowl roughly, until a thick layer of mashed potato–like paste has built up on the surface of the wedges. Transfer wedges to prepared baking sheet, arranging them in a single layer with one flat cut side down, and space between each piece.

Transfer baking sheet to a heatproof surface, season wedges with salt and pepper to taste, and toss on baking sheet to evenly coat. Transfer to a paper towel-lined plate and blot away excess oil. Discard paper towels and serve with your favorite condiments.

Potato wedges are best enjoyed immediately. Leftovers can be refrigerated in an airtight container for up to 3 days.