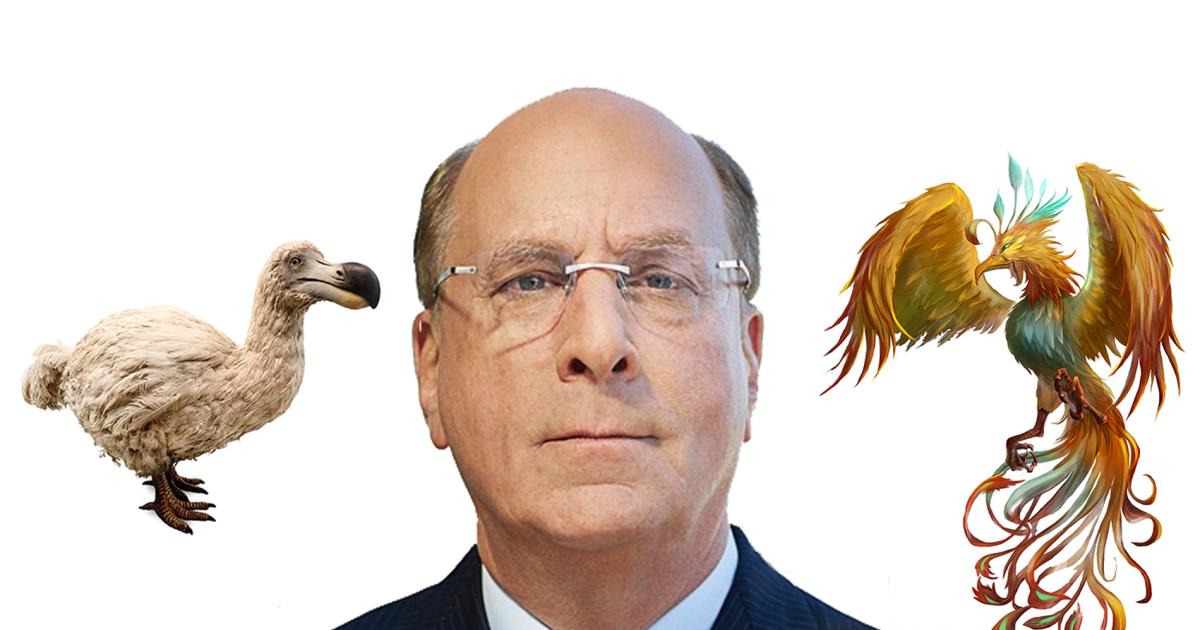 BlackRock Chairman and CEO Larry Fink released his annual letter to CEOs on Monday night. If you’re working to help the world decarbonize and make the energy transition affordable, you’re a phoenix, he says. But if you’re a laggard on the net-zero transition, you risk going “the way of the dodo.” That is: extinct.

What in the name of Wall Street is going on? Well, remember the heckling back in 2019 when The Business Roundtable, a lobbyist group composed of CEOs of major U.S. companies, said they’re all-in on stakeholder capitalism? If you were worried that the ultra-wealthy heads of JPMorgan, Johnson & Johnson and Vanguard had suddenly become woke, you can rest easy, said Fink:

Fink made clear that the “fair pursuit of profit” is still what animates the markets, with long-term profitability as the measure of success.

It’s good to hear the lucid emphasis on long-term value creation throughout the letter — although I could write another newsletter on how “fair” the pursuit of profit has been in our neoliberal era, epitomized by Milton Friedman’s dictum on the purpose of business. The system may be rational, but it’s hardly fair to all.

So, what are the key takeaways from the letter for finance professionals and the companies they invest in?

The business of purpose is profit

Fink made clear that business grounded in purpose is no radical concept. To reinforce this, he used the word “purpose” as many times as he did “capitalism” in this year’s letter.

It’s hardly radical (or woke). When Harvard Business School was founded in 1908, its mission was to train leaders who “make a decent profit — decently.” The principles guiding the business elite and basic morality have diverged considerably since. Decency, at least in business, seems to be a highly fungible commodity.

But the basic question remains. If you can’t answer the question “What is your firm’s purpose? with clarity, candor and conviction (and speed), you may have trouble distinguishing yourself as a “truly great company” — the type BlackRock in which it says it wants to invest clients’ money.

Moreover, he said, ignore the pushback. The cautioning that “political activists, or the media … may hijack your brand to advance their own agendas” has, to me, a paranoid vibe to it. But, when it comes to employees, Fink is correct that in today’s highly polarized and distrusting world, your team can be your company’s staunchest advocates — if they can connect with its purpose. If they can’t, they could become its harshest critics.

As Fink made clear, purpose isn’t just a nice-to-have. Amidst the Great Resignation, purpose can be a firm’s greatest asset for talent retention, on par with a competitive comp package. “Those who show humility and stay grounded in their purpose are more likely to build the kind of bond that endures the span of someone’s career.”

Fink left no uncertainty about BlackRock’s lack of interest in divestment as a strategy for changing companies’ practices.

He has previously described the outright divestment of certain sectors (coal, oil, gas) and the narrow focus on climate policies concerning public companies as potentially creating “the largest capital-market arbitrage in our lifetimes.” By which he means that with an increased focus on ESG disclosure for companies in the public markets, the dirtiest assets can merely take their firms private to avoid the scrutiny of Wall Street and its regulators.

As a result, Fink doesn’t see divestment as a strategy that will get the world to net zero, and I’m inclined to agree.

As such, Fink highlighted that BlackRock is committed to working with companies from all industries. For the largest asset manager in the world, working “with” means acting as sincere stewards of their managed assets.

I agree that more shareholder democracy — more voices getting to have a role in decision-making within the capital markets — would lead to better results for all the stakeholders that stakeholder capitalism purportedly uplifts. Would The Gap have the shameful CEO-to-worker pay ratio of 3,113 to 1 if more humans with a stake in the business had more access to its decision-making and governance? Highly unlikely.

That said, Fink’s notion that “we need to pass through shades of brown to shades of green” is a contested one within the sustainability community given the urgent need for humanity to ditch fossil fuels if we’re to sustain ourselves. Most sustainability advocates say that there’s no longer any time for “brown.”

Clearly, many more voices will weigh in on Fink’s letter. And more scrutiny is to come. For example, I would love to see a group such as Universal Owner, which offered a seriously insightful report on whether Vanguard acts as a universal owner on climate change (spoil alert: it doesn’t), dig into BlackRock’s stewardship efforts in 2022. We know through living in this era that democracy is messy. That said, I’m truly excited to see what the largest stewardship team in the asset management industry will accomplish this year, and how much of a difference its size and bravado can actually make.