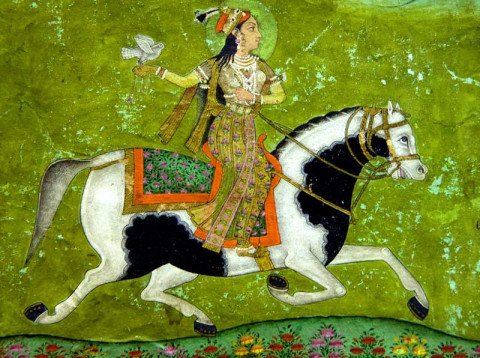 Like much of her reign, the accession of Razia to the sultanate of Delhi is shrouded in mystery. The only contemporary chronicle is the Tabaqat-i-Nasiri of Minhaj Siraj Juzjani, whose career had thrived during her brief tenure and who was full of praise for her skills. ‘A great sovereign’, he wrote of her: ‘Sagacious, just, beneficent, the patron of the learned, a dispenser of justice, the cherisher of her subjects.’ But what good did it do her, he asked, if men failed to take her seriously?

Her father Shams ud-Din Iltutmish had noticed her leadership qualities and named her as his heir. Nevertheless, after his death, his eldest surviving son Firuz took power and swiftly proved the wisdom of Iltutmish’s judgement. Firuz’s inclinations, Juzjani wrote, ‘were wholly towards buffoonery, sensuality, and diversion … He had a passion for frolic, and for riding elephants, and the whole class of elephant drivers derived immense benefit from his riches.’

Firuz’s mother, Shah Turkan, controlled the affairs of state. She tried to have Razia assassinated, but Razia foiled the plot and, rousing the support of the people of Delhi, overthrew and executed her brother in the autumn of 1236. She came out of purdah and appeared in public in sultan’s clothing.

It was a tumultuous period. The Mongols threatened to the west, while internal stability was undermined by various fractious forces, including Turkish nobility and rebellious provincial governors. Razia spent much of her reign dealing with insurrections, on occasion leading the army herself. As Juzjani put it, she had a talent for war.

During one such sortie from her Delhi stronghold against Malik Iltuniah of Bhatinda, the nobility dethroned her for a younger brother. Razia was imprisoned. She wasn’t done, however. She married Iltuniah and together they marched on her former capital. They were defeated outside its walls and their army abandoned them.

One later source has them murdered by bandits while fleeing, asleep under a tree outside Kaithal. It is more likely that she and her husband were murdered by their captors on 13 October 1240. ‘May she rest in peace,’ Juzjani wrote.