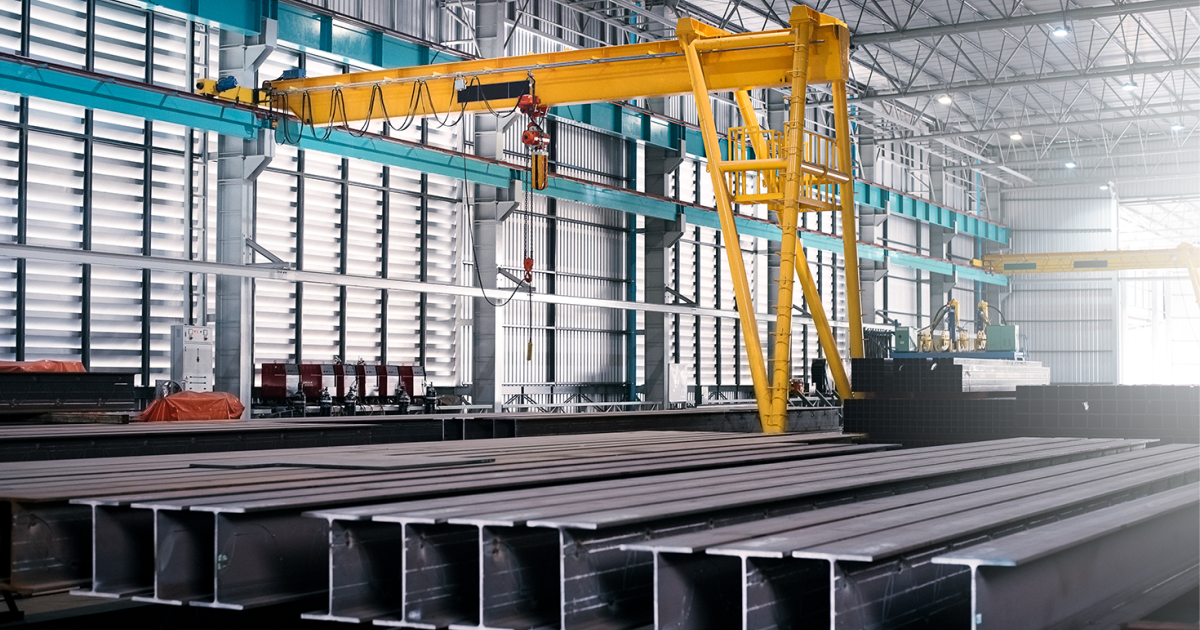 When automaker BMW invested in U.S. clean steel startup Boston Metal and Mercedes Benz bought a stake in Swedish startup H2 Green Steel, the investments represented more than the greening of an industrial portfolio. They marked the first steps in the decarbonization of steel — a process that will require the reinvention of not only how steel is made but essentially a reimagining of the entire steel supply chain.

Because steel is a basic building block of the global economy, it factors into the production and operations of most industries from auto production to aviation to construction to household appliances. That means it contributes to all of their carbon footprints. Although steel is one of the most recycled materials on the planet, its initial production and energy demands make it the largest industrial consumer of coal and one of the most carbon-intensive industries on Earth. The sector accounts for 2.6 gigatons of carbon dioxide emissions annually, making up roughly 10 percent of the global total.

According to the International Energy Association, “to meet global energy and climate goals, emissions from the steel industry must fall by at least 50 percent by 2050, with continuing declines towards zero emissions thereafter.” To accomplish this, producers need a new energy source for production as well as new raw materials, requirements that will upend a large portion of the mining industry in particular.

Lowering emissions in the immediate future

Steel will have no choice as its largest consumers — companies such as Mercedes and BMW — increasingly demand “green steel” in their quest to meet their own climate targets. But steel producers won’t have to do it alone, as upstream and downstream on the supply chain begin to work together.

Any solution will require a spectrum of technology changes and individual efforts to increase efficiencies to move the industry forward.

In the immediate future, steel producers can lower emissions by 10 percent to 30 percent by applying best available technologies, higher quality iron ores and optimizing fuel mix at blast furnace (BF) and blast oxygen furnace (BOF) operations. Efforts like these are particularly important in places such as China and India, where there is preponderance of these older facilities and newer techniques and feedstocks can have a material impact on the entire industry’s emissions.

But to realize larger emission reductions will require significant investment in new technology: This might include hydrogen-based reduction to produce DRI/HBI with low/no emissions, carbon capture, storage and use technologies or even newer alternatives, such as molten electrolysis. Also pivotal to forward progress will be an increased emphasis on the circular economy and the recycling of scrap steel to replace primary steel production.

Ultimately, this overhaul of steel production will lead to substantially reduced metallurgical coal intake over time. Demand will drop by up to 50 percent by 2050 from average levels in 2019 and 2020. While the decline will depend on how fast the largest consumers deploy their efficiency measures, we think it is possible to see significant decreases already in this decade. 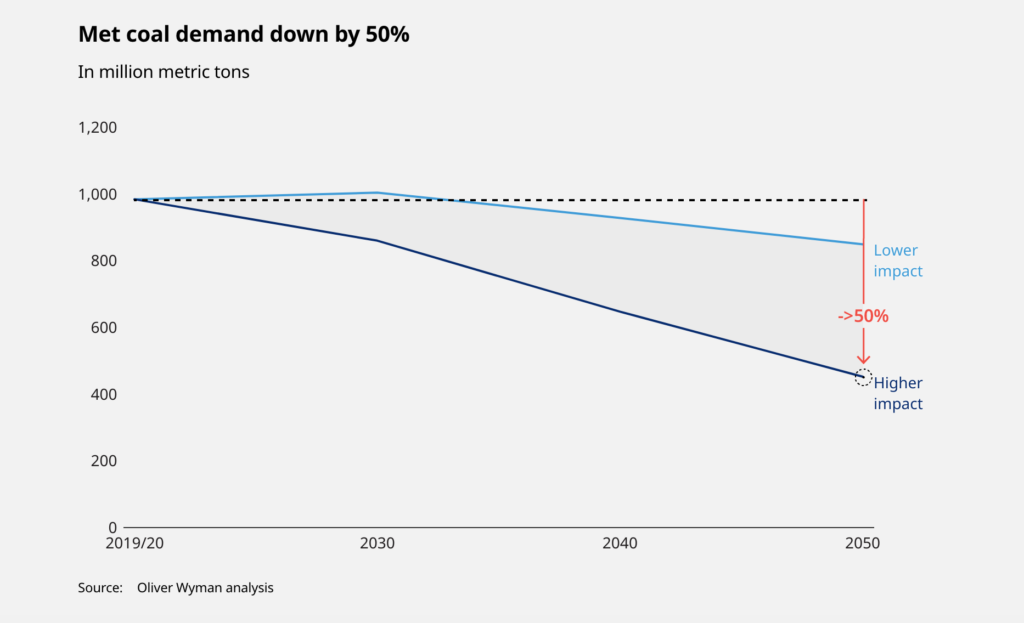 For iron ore, the outlook is more stable, but the composition of what’s supplied will continue to change, as demand for higher-quality ores increases. These higher grades play a key role in the realization of the first 10 percent to 30 percent emission reduction in BF-BOF routes, as well as for DRI/HBI production. Already today, they are fetching significant price premiums. 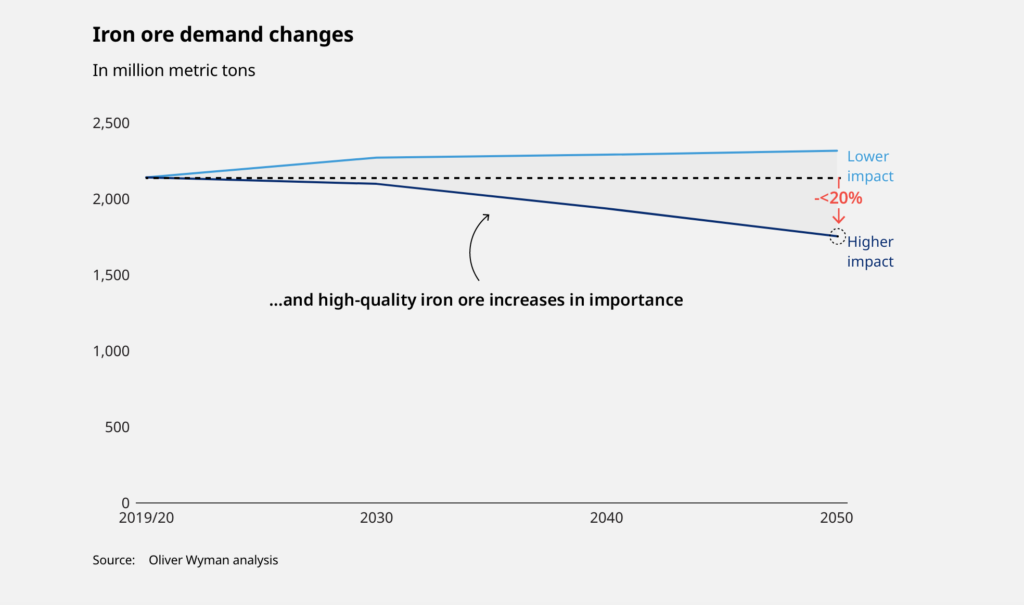 DRI/HBI based steel will play an important role in the new steel industry. Even with supply limits on higher-grade iron ores, we forecast a significant demand increase for DRI/HBI, through 2050 — maybe as much as 200 percent higher. This would also indicate a marked increase in the trading volume of HBI, suggesting the formation of a new commodity market.

Increased use of DRI/HBI in turn will drive demand for hydrogen, not all of which will be green, especially in the beginning. We expect to see a significant increase in electrolysis capacity beginning in the next decade. By 2050, an additional 100 GW may be required where today there is very little dedicated capacity. 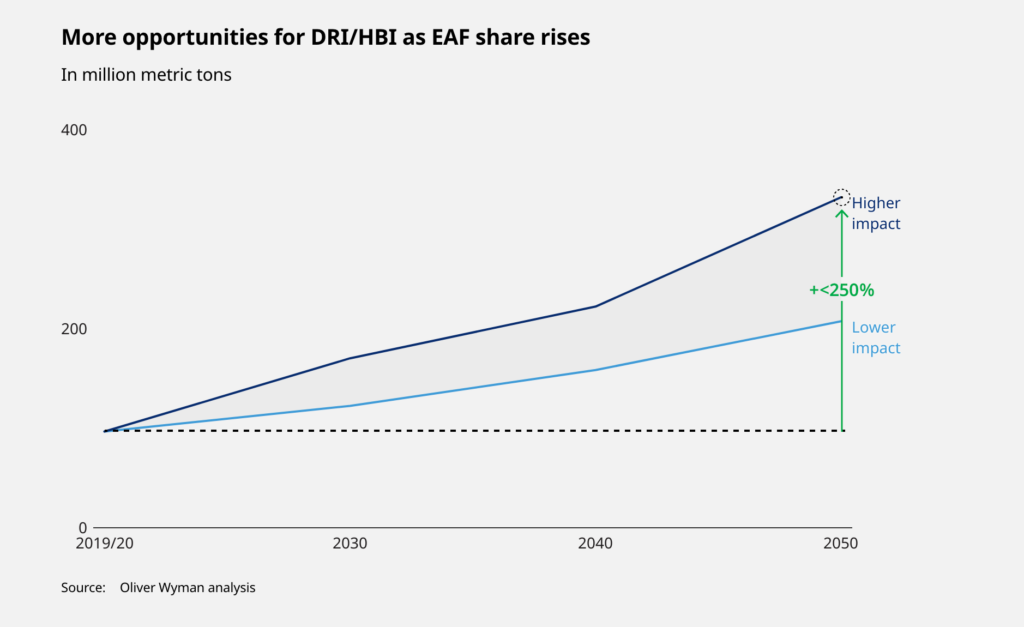 Both, the increasing share of EAF and H2 electrolysis will significantly drive electricity demand, and in particular for renewable energy.

Finally, scrap supply will have to increase significantly. This is especially true for China, where supply would have to double to as much as 400 million metric tons to accommodate a significant increase in EAF-based production. That would envision a jump from 10 percent of Chinese production being EAF to at least 40 percent or more.

As a result, the supply chains that today move large amounts of metallurgical coal (the type of coal used for making steel) and iron ore to steel producers will need to switch to providing equally voluminous amounts of electricity and hydrogen, scrap and DRI/HBI. While eventually the aim will be for these new inputs to be “green,” initially there is unlikely to be enough production to achieve that. 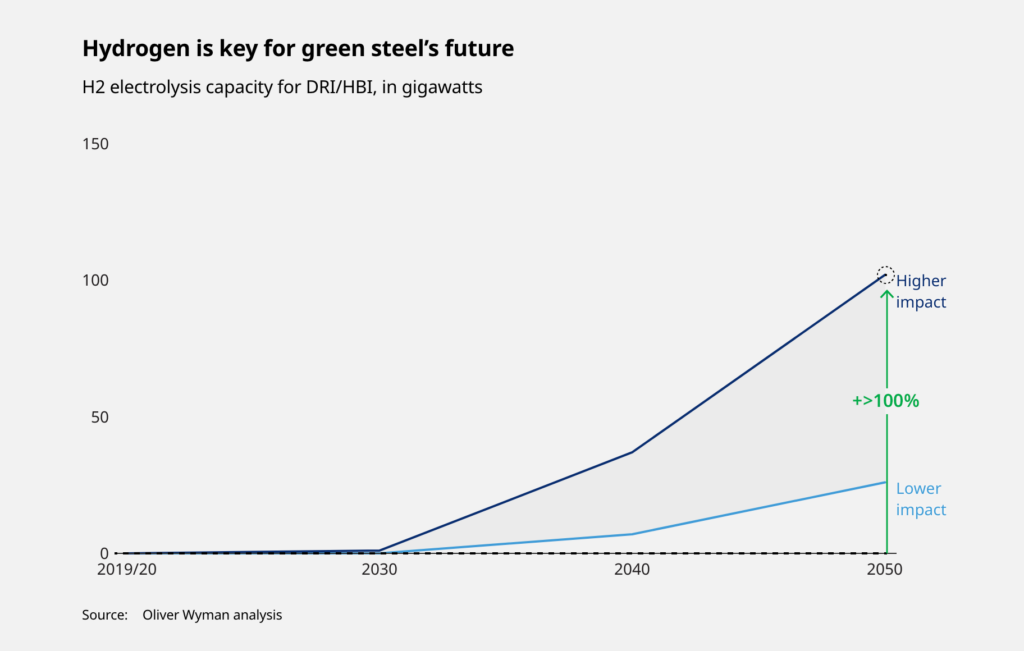 What does this mean for various regional economies? Here are some examples:

Australia has several resources it could leverage, including renewable energy and natural gas, to become a leader in hydrogen production. It additionally has vast iron ore deposits that could be used to produce HBI for export or green steel products or semi-finished products.

Russia is aiming to use its gas for hydrogen and DRI production.

Chinese steel producers want to start producing high-grade iron ores in places such as Africa, in an effort to become more independent from Australian ore producers and make its own steel production more efficient.

The importance of renewable power, hydrogen and scrap in these new value chains make it vital and inevitable for energy, technology, engineering and recycling players to become active in the transformation of the steel supply chain. That new competition will put pressure on incumbents from mining and steel. Expect some jostling as players try to seize an early advantage in what will be a $1 trillion-plus transition over the next 30 years.

The bevy of newcomers and the dramatically increased need to cooperate across industries to reduce carbon footprints will lead to a re-evaluation of production locations and new contractual arrangements. It will encourage the formation of new partnerships and symbiotic ecosystems that will share the cost of the transition and develop new markets. One example is a memorandum of understanding signed between Rio Tinto and Nippon Steel to jointly explore and develop low-carbon steel value chains. But many others exist.

The eventual greening of steel is inevitable, and it’s obvious that the metallurgical coal business looks to be one of the biggest losers, with other technologies and commodities, such as renewable electricity and hydrogen, clear winners. Which will come out on top among regions and corporate players remains far less apparent. But given the amount of investment required and the length of time needed to bring product to market, the advantage will go to those willing to move quickly and take calculated and shared risks through partnerships to help create new industrial ecosystems and position themselves along steel’s value chains.