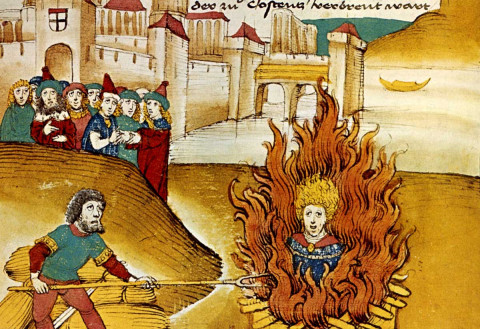 The defenestration of three Catholics from the castle in Prague in May 1618 helped precipitate the Thirty Years War. But it wasn’t the first time Czechs had resorted to this distinctive method of attempted assassination.

The death by burning of Czech Wycliffite Jan Hus in 1415 had failed to halt the spread of his ideas. When Wenceslas IV limited the churches Hussites could use, they held their services on rural hilltops instead. Then Jan Zelivsky, a former monk, took things further. On 30 July 1419 he preached in Prague New Town. Among his texts may have been Ezekiel: ‘I will bring a sword upon you, and I will destroy your high places.’ He led his congregation to the New Town Hall. Inside were 13 men, including the burgomaster and the magistrate. The others were tradesmen and merchants (a tanner, a fuller, a wood-dealer.)

Some reports say they abused the Hussites, that a stone was hurled at the monstrance that Zelivsky carried. The building was stormed. All but one were shoved, pushed, thrown into the street. Some survived the fall; they were beaten to death. A fuller named Rehak died inside. One source has him hiding in the kitchens.

The shock and rage of Wenceslas was such that he died of a stroke not long after, ‘roaring like a lion’ in pain.