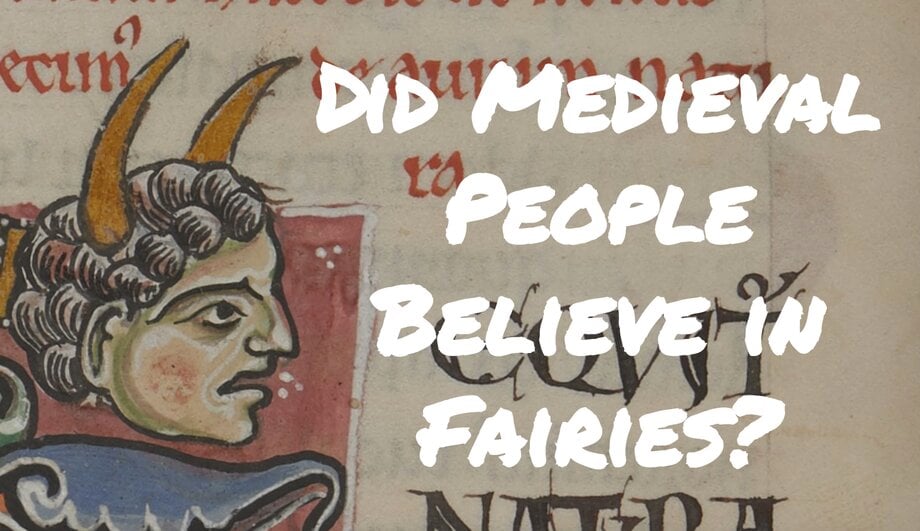 Today fairies are typically relegated to the realm of children’s stories or superstitions, but in the Middle Ages, some individuals believed that fairies were real and that they had the power to impact human lives in material ways.

If you head to the theatre today to catch a production of Shakespeare’s A Midsummer’s Night Dream you probably go expecting a delightfully fantastical romp through an unrealistic narrative and imaginary land. You would not, in all likelihood, imagine that those fairies galivanting across the stage were real and that their actions were based on real beliefs.

When Shakespeare was writing, however, fairies were far more than just fantastical figures intended to entertain children. Many in the audience in the early years of the seventeenth century would have believed fairies were real. People saw them as material, magical individuals who could come and impact their lives in real ways. There are numerous scholarly articles showing just how deeply Shakespeare’s play is based in real fairy beliefs about individual fairies like Robin Goodfellow and specific fairy behaviour like abduction and enchantment.

These beliefs were also prominent in the Middle Ages. At that time too, fairies were seen as real supernatural beings who could and did impact the lives of humans.

It is hard to determine when exactly belief in fairies started. The idea that there were fairies who interacted with humans probably finds its origins in one or more of the various pagan religions in place in Europe prior to the introduction of Christianity, but it’s hard to pin down exactly when that would have been and what those pagan versions would have looked like. But there’s no question that fairy belief was firmly in place by the early Middle Ages.

It is also a bit hard to determine what exactly medieval people would have believed about fairies. Like everyday magical practices (which you can read more about here), fairy beliefs sat outside of the learned or scholarly tradition. As a result, most fairy lore would have circulated orally in the general populace, and so most of it wasn’t written down. That means real people’s ideas and superstitions about what fairies looked like and did has probably been lost. There are some exceptions, and some individuals were actually invested in trying to categorize different kinds of fairies, but these accounts are inconclusive and a bit haphazard. If you’re interested in these kinds of categorizations, check out Richard Firth-Green’s Elf Queen’s and Holy Friars: Fairy Beliefs and the Medieval Church. It gives a great overview of the debate and the impossibility of identifying a coherent, medieval means of categorizing fairies.

In any case, we know that many people across the Middle Ages believed in fairies (and they probably didn’t really care all that much about how they were categorized).

Fairies appear in surviving records in a few different ways. They appear in romance literature as significant characters who tempt and challenge the heroes. They also appear in historical literature as the ancestors of individuals in the historical record. Merlin, for example, was rather famously given a fairy father in the historical chronicle Historia Regum Britanniae by Geoffrey of Monmouth, which you can read more about here. The original ancestor of the French Lusignan family was also thought to be the fairy Melusine. These literary manifestations are awesome, but another topic for another day. What I want to look at here are beliefs in real fairies.

The real, practical fairy beliefs can be found in recorded sermons and religious texts. These show us that medieval fairies look basically nothing like the helpful fairy tale versions that we are familiar with today.

What Did They Believe Fairies Did?

Records of sermons and pastoral manuals give us some ideas of what people might have believed about fairies. Here’s what one sermon preached in England around the year 1400 tells us:

There are also others who say that they see women and girls dancing by night whom they call elvish folk and they believe that these can transform both men and women or, leaving others in their place, carry them with them to elfland.

This account survives in Cambridge University Library, MS KK IV 24, but I am quoting the version provided by Firth-Green in Elf Queens and Holy Friars.

Another account written in Iceland in the late sixteenth century gives us even more details, again courtesy Firth-Green:

But some beings, who live in the hills close to men, are more amicable and not so dangerous unless they chance to have been harmed by some kind of injury and provoked to wickedness. They seem, indeed, to be endowed with bodies of incredible subtlety, since they are even thought to enter into mountains and hills. They are invisible to us unless they wish to appear of their own volition, yet the properties of certain men’s eyes are such that the presence of no spirit can ever escape their sight… They know a thousand devices and an infinite number of tricks with which they harass men in wretched ways, but their young people are said to have a similar stature, clothing, and even way of life to that of their human neighbours, and to take excessive pleasure in coupling with humans. Examples are not lacking of a number of the rogues who are said to have impregnated women beneath the earth and had access to them at fixed times or as many times as they wished. And from time to time the women of our land have been oppressed by these earth-dwellers and innocent boys and girls and the young people and adolescents of both sexes have very often been taken away, though quite a few are restored safe and sound after a number of days, or sometimes a number of weeks, but some are never seen again, and certain ones are found half alive, etc.

From these accounts it’s easy to see what medieval people believed about fairies:

As you can see, they were far from the kind versions that still exist in some places in western culture, but they were not absolutely evil either.

Did Everyone Believe in Fairies?

Pretty much everyone in the Middle Ages probably believed that there were some sort of supernatural beings that could positively and negatively influence the course of their life. Not everyone, however, agreed that those beings were fairies.

The church argued that there was no such thing as fairies. They insisted that the things people assumed to be fairies were actually demons. Here’s what the rest of the first sermon I quoted has to say:

All of these [men and women who dance by night and carry people to elfland] are mere fantasies bequeathed to them by an evil spirit. For when the devil has won over the soul of such a person to believing such things, he transforms himself otherwise, now into the form of an angel, now a man, now a woman, now other creatures, now in dances and other games, and thus by the weak faith of their souls such wretches are deceived.

They were also rather harsh on those who didn’t accept their demon idea and kept right on believing in fairies:

But those who believe in the aforesaid things, or stubbornly defend them, or propagate them, especially when they shall learn the truth, are faithless and worse than pagans and four times a year they are cursed by the Lord and his holy church… They should know that they have forsaken the faith of Christ, betrayed their baptism, and incurred the anger and enmity of God.

In the church’s eyes, believing in fairies was almost a form of heresy, and certainly an act that went directly against dominant church ideas.

So, believing in (and being able to blame things on) fairies offered some degree of comfort and control to medieval people. It offered explanations for some inexplicable things and any easy excuse when things went wrong.