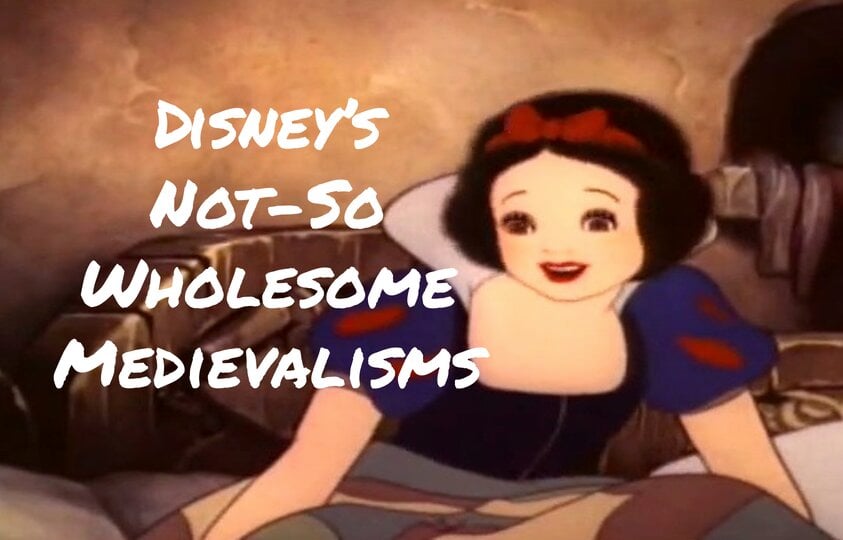 Governor Ron DeSantis of Florida, in response to Disney’s opposition to the state’s “Don’t Say Gay” bill, recently criticized the corporation as “woke” and suggested that Disney should get back to being “family-friendly” and not meddle in “injecting” LGBTQ propaganda into “kindergarten classrooms”—a message that evokes Disney films of yore, which married conservative values with an imagined Middle Ages. Disney has since lost $50 billion in value and the Florida legislature has voted to revoke the Reedy Creek Improvement District, which allows Disney to effectively administer its properties in Orlando.

The thing is, Disney’s work has never been value-neutral … and some of the messages it conveyed in the past, and of the past, were downright toxic.

Walt Disney’s work was inspired by his personal arch-conservatism, and was designed to push a patriotic, white, middle-class, heterosexual married domesticity. As he wrote in “Deeds Rather than Words” (1963), he believed in “a supreme being, in the fellowship of man, and the sanctity of the home.… I have watched constantly that in our movie work the highest moral and spiritual standards are upheld, whether it deals with fable or with stories of living action.” This was present in his fairy-tale inspired animated movies, such as Snow White and Sleeping Beauty, as well as his live-action features, whether they depicted the antebellum south (The Song of the South) or the expansion of the American frontier (check out Fess Parker’s speech in Davy Crockett, Indian Fighter).

Whether it was the medieval past or American history, however, Disney’s works were all “fairy tales”: they used an imagined past to tell moralistic stories. As I wrote in my introduction to Grimm’s Complete Fairy Tales, “…a fairy tale is a form of folk tale—a traditional story that doesn’t have a definite author but belongs to everyone equally…  they are generally set ‘once upon a time.’ For us, this usually means an imagined and fanciful idea of the Middle Ages…. even though the Grimms were devout Christians, they were interested in folk tales as remnants of pre-Christian culture… a culture that (according to them) dated back to even before recorded history (thus, ‘once upon a time’).”

Disney was hardly the first American animator to rework the Grimms; the (Jewish!) Fleischers did so before him with a racy, jazz-age sensibility. But Disney’s success lay in his bowdlerization: In his animated fantasies, Disney “Americanized” (which is to say “Anglo-Americanized”) even his European source material, which he took liberally from sources such as the Grimm Brothers (1937’s “Snow White and the Seven Dwarfs,” the 1938 Mickey Mouse short “The Brave Little Tailor,” and “Hansel and Gretel” as 1932’s Babes in the Woods), and Hans Christian Anderson (“The Shepherdess and the Chimney Sweep” as 1934’s The China Shop and “The Ugly Duckling” in 1939). What were once gruesome morality plays came to embody values such as romantic love and individual virtues such as pluck and bravery—all located in a whitewashed, romanticized past so vague as to be ahistorical. This is a profoundly conservative idea: whereas liberals look to a better future, Disney sees the past as good, the place where authentic virtues come from, and never a place with injustices that need to be righted. Thus, whereas the Fleischers’ Snow White featured African-American jazz musician Cab Calloway; Disney’s Snow White was… very white.

Did Disney’s arch-conservatism extend to being a Nazi sympathizer or an anti-Semite? He reportedly attended meetings of the German-American Bund, and he hosted Nazi propagandist Leni Riefenstahl in 1938, immediately after Kristallnacht. That doesn’t stop “A Wonderful Day for Pie” from being genius. (We won’t even discuss the racist stereotypes in his World War II propaganda videos.)

Even though Walt Disney died in 1966, it wasn’t until the “Disney Renaissance” of the ‘90s the company even considered non-European source material (Aladdin in 1992 and Mulan in 1998). Aladdin has been criticized for an Orientalist view of the Middle East, though Mulan has been praised for its use of Asian voice actors and gender-bending plot. (Conversely, 1994’s The Lion King, an original story set in Africa, uses mostly white voice actors.) Meanwhile, the company continued to use source material from the Grimms (“The Princess and the Frog in 2009 and “Rapunzel” as 2010’s Tangled), and Andersen (The Little Mermaid in 1989, The Little Matchgirl short in 2006, and “The Ice Queen” as Frozen and Frozen II in 2013 and 2019). Added to this are the French fairy tale Beauty and the Beast (1991), and the Romantic writer Victor Hugo, whose The Hunchback of Notre Dame (1996) uses medieval France long-ago and far-away. Pocahontas (1995), turns the Virginia frontier into a generic storybook romance; Hercules (1997) of course comes from Greek myth; and Tarzan (1999) is based on Edgar Rice Burrough’s Kipling-pastiche source material. All had the same thing in common: pro-social messages, a plot centered around Western ideas of romance ending in married bourgeois respectability… and of course, princesses.

Sure, the academic critique may seem like splitting hairs, but critics have good reason to monitor the Mouse for its messages. As Henry A. Giroux and Grace Pollock put it in their book The Mouse that Roared (2010), Disney is a “teaching machine.” The messages in the movies are played to preschoolers in living rooms across the world—and, ever since Walt was alive, these values have been married heterosexual romance and the triumph of America and American values. Of late, though, Disney has had to steer between the Scylla and Charybdis of the culture wars. No matter what they do, the poor studio heads, who, after all, just want to make profitable movies and increase shareholder value, get criticized. If they go with Walt’s original vision, they are dragged over the coals by academics and other bien-pensants. If they try to play to their considerable LGBTQ fan base, then conservative Christians get into a moral panic over Frozen’s supposed queerness. Disney’s sensible response has been to keep any left-leaning messages as coded as possible while still foregrounding heterosexual responsibility—the tried-and-true formula which is the best way to get people to keep consuming their product.

In other words, DeSantis can relax. He and Disney studios both faithfully serve the same god: capitalism.

Top Image: Screenshot of Snow White from the 1958 Reissue trailer for the film Snow White and the Seven Dwarfs. Public Domain / Wikimedia Commons