A very good boy has unearthed a large hoard of medieval bracteate coins near Wałbrzych in southwestern Poland that is the largest hoard found in Poland in a 100 years. Kajtuś was out on a walk earlier this month when his canine senses prompted him to dig and dig he did, until he hit a pot filled with coins.

His owner reported Kajtuś’ find to the Lower Silesia Heritage Protection Office who dispatched a team of archaeologists to survey the site. They

excavated the coins and the pieces of the earthenware pot containing them. Archaeologists identified the coins as bracteates minted in Bandenburg, Saxony or Silesia in the first half of the 13th century. They are in excellent condition, well-stamped with clear, sharp images of griffins, mermaids, angels and architectural features.

Bracteates were made from thin sheet metal, so thin that they were only stamped on the obverse with just a negative of the impression appearing on the reverse of the coin. They quickly got threadbare with use and were regularly taken out of circulation to be melted down and restamped, so bracteate hoards are relatively uncommon, and large hoards like this one even rarer. 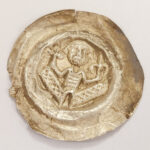 “The idea of stamping coins from a thin plate was caused by the low availability of ore – silver or, more rarely, gold, and the reserves of the mint. Kings, dukes, and bishops could mint coins,” the heritage protection office explains.

Only with the discovery of silver deposits near Prague did the “euro of medieval Europe”, the Prague groschen, begin to be minted, which gradually took over from bracteates.

The coins are archaeological heritage and will therefore eventually make their way into a museum rather than onto the numismatic market. First, however, they need to be properly studied and conserved – which will require time as well as academic grants.

Before this find, the largest bracteate hoards in Poland were found in the  Warsaw and Kraków areas. The discovery of a large hoard in Lower Silesia will stimulate new interest in the medieval history of the area. Officials are keeping the exact number of coins and find site secret for now to make it hard on any loot-minded tourists who might want to try their luck with surreptitious metal detecting.

Kajtuś does not appear to be letting the fame go to his head.