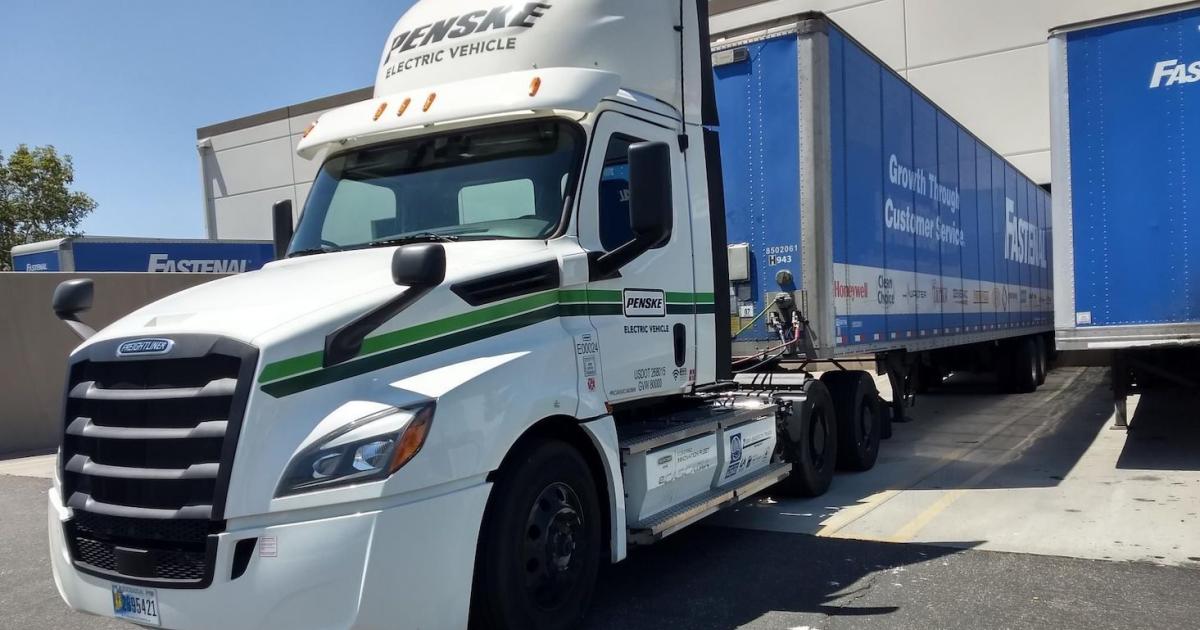 Pat Brandon has been hauling wine from Sonoma to Napa county for 10 years as a driver for Biagi Bros. But now, he is doing it in an electric truck and couldn’t be prouder. “The first time I ever drove this truck I was like, ‘What, you picked me to drive the electric truck?’ I could not believe the honor it was to be the first one.”

And Brandon is not alone. As more electric trucks hit the road, your wine, beer, snacks, international packages and more may be delivered in an electric truck.

As companies around the country start electrifying their fleets, the North American Council on Freight Efficiency (NACFE) and RMI wanted to find out the challenges and opportunities they face. To do this, NACFE followed 13 electric trucks from the United States and Canada on their regular routes for three weeks, collecting metrics and stories from the road.

The event, Run on Less — Electric, proved that certain trucking segments are more than ready to go electric. And when they do, we could save 100 million tons of CO2-equivalent to eliminating 25 coal-fired power plants.

All in all, the trucks in the run covered almost 7,000 miles, making 1,692 deliveries and saving more than 11 tons of CO2. They delivered beer across Los Angeles (Anheuser-Busch), international packages throughout Manhattan (DHL), snacks in Central California (Frito-Lay), electrical equipment in Cincinnati (Servall Electric) and more. The medium- and heavy-duty trucks in the run included four segments: van/step vans; medium-duty box trucks; terminal tractors; and short heavy tractor regional delivery trucks. The run showed that all four segments are ready to go electric.

I think this has the potential to be a real attractor for drivers and to improve the daily driver experience.

At the run’s finale in late September, experts gathered virtually to highlight some lessons. Mike Roeth, executive director of NACFE, explained that over the next months, NACFE will be analyzing the enormous amount of data gathered and publishing more quantitative and qualitative results. But as the three other presenters — from industry, government and the nonprofit sectors — highlighted, the run has already taught us many lessons.

The technology is here

Jason Mathers, director of vehicles and freight strategy for the Environmental Defense Fund, explained that one of the most important things he learned from the run are the challenges and the benefits of the technology. “It’s important to elevate the challenges fleets face in getting these vehicles on the road so that the fleets and manufacturers can work through those,” he said. “And it’s really great just to demonstrate what the technology can do today, which is really astounding.”

Rob Reich, executive vice president, chief administrative officer for Schneider, explained, “Run on Less has been able to show real-world applications in a variety of both medium- and heavy-duty situations. It kind of takes out the nervousness. We’re just looking to learn and identify where can we apply these battery-electric trucks in the future. We take away from Run on Less that absolutely there’s ways to do that today. And so I think the opportunity to move faster and more aggressively is what Run on Less really presents us.”

Michael Berube, U.S. deputy assistant secretary for sustainable transportation, emphasized that just a few years ago people thought we would never be able to electrify trucks. “But the reality as you guys have shown is that today there are some parts of the market that are ready.” He emphasized that 50 percent of all freight in the United States moves 100 miles or less, and 75 percent moves 250 miles or less, meaning a large portion of freight can be moved by electric trucks.

Many presenters also discussed the benefits to the drivers. This was noted in the visits that Roeth made to all the drivers in the weeks leading up to the run.

“The operations people are really seeing the opportunities here,” said Roeth. “In addition to the decreased maintenance, they really feel that this is a truck that will attract those that wouldn’t have otherwise driven a medium or heavy-duty truck — not having to deal with what has become a complex power train with all of the emissions regulations. Personally, I believe this will be the biggest driver attraction I will see in my career.”

Reich agrees. “I think this has the potential to be a real attractor for drivers and to improve the daily driver experience. And I wouldn’t underestimate the attraction because it’s a sustainable action that company is taking, and I think drivers will take great pride in that.”

But we can hear it straight from the drivers themselves. As Penske driver Donald Disesa noted, “I feel honored to be able to drive the electric truck … the truck is so quiet, everything is smooth. It gives you time to focus on what’s going on around you … As soon as I got in the electric truck, I realized this is the way of the future.”