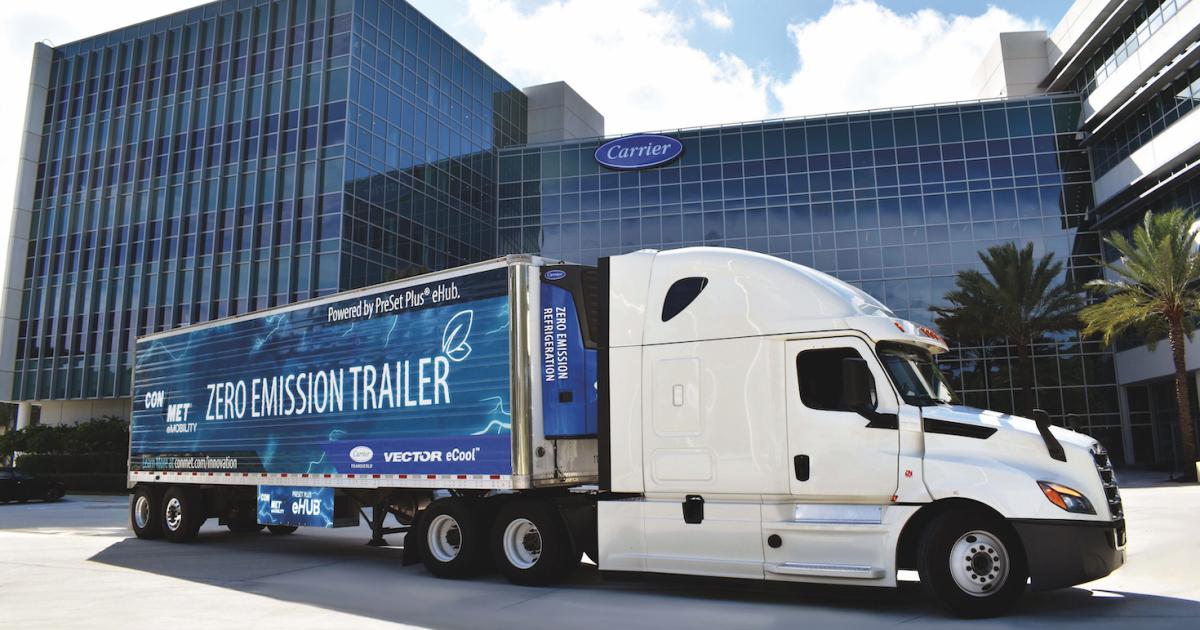 Tractor trailers provide the crucial connective tissue for the world’s supply chains. So it’s easy to see why they are a prime target for electrification and alternative fuels development — and why lists about emerging electric truck options are always on the most-read GreenBiz story reports.

But while strategies for retooling or replacing the internal combustion engines that haul containers to and from warehouses claim the bulk of attention, reducing the emissions of refrigerated trailers — vital for keeping perishable food, medicine and other pharmaceutical supplies cold — is also crucially important.

This is a complex problem: One estimate suggests keeping humans and things cold accounts for 10 percent of global GHG emissions. Obviously, cold chain transport via trains, trucks, planes, ships and containers is just a piece of that. But as the planet grows warmer, the demand for refrigerated trailers (a.k.a. reefers) will only increase — especially as a protective measure against food waste, another major GHG emitter.

Carrier Global, a leading provider of HVAC and cold chain technologies for both buildings and trucks, has been driving toward that opportunity for more than a decade, with its Vector eCool initiative managed by its Transicold division. Among other things, the technology can convert kinetic energy from a trailer axles into electricity and then store it in a battery that powers the refrigeration system. A recent strategic alliance with ConMet, which manufactures wheel components, will amplify this capability, by capturing energy from a vehicle’s brakes. When the vehicle is parked, the eCool system can be plugged into the grid and charged in roughly four hours, according to Carrier’s marketing literature. The end game: Instead of having to run a separate diesel engine to maintain safe temperatures, the trailer can run off a battery.

“By the end of this year, we will have electric options for customers in trailer, truck and light commercial vehicle refrigeration applications and new technologies such as this wheel hub power generation solution for trailers that can help further address environmental regulations,” said Tim White, president of refrigeration for Carrier, in a statement. The last part of his quote refers, in particular, to the tougher requirements that states such as California are passing for all transportation refrigeration units — including trucks, railcars and other containers.

Carrier recorded revenue of about $20 billion in 2021. Its refrigeration business is about $4 billion of that amount, and the transport-related sales account for about two-thirds of that, according to Mike Noyes, vice president and general manager for Truck Trailer Americas at the Palm Beach Gardens, Florida-based company.

When I spoke with Noyes last week, he told me that Carrier’s electrification technology is being tested on the road by food service company Sysco on routes in Riverside, California. (Obviously a warm climate.) Aside from ConMet, Carrier is also working with Great Dane, a major supplier of trailers. The Sysco trucks have been able to run for up to 10 hours on all-electric power. “It’s been exciting to see how capable this technology is,” Noyes told me.

One of Carrier’s corporate commitments is to help customers reduce their own emissions by 1 gigaton by 2030. One of the more intriguing things I learned from my discussion with Noyes is that Transicold has been adding electrification for more than a decade; sure, it was initially intended as a fuel savings measure, but now that foundational technology offers an opportunity for its customers to accelerate refrigeration electrification. “It offers a giant head start for retrofits, at a much faster pace than if you were just launching a new platform,” Noyes said. As of April 2020, there were more than 1 million Transicold units installed, although only a portion of them use the Vector eCool technology.

Carrier isn’t alone in its electrification journey. One of its major rivals, the Thermo King division of Trane Technologies, last November announced a fully electrified refrigeration unit that can run on energy recovered from axles, shore power or hybrid energy sources. The company said it is investing $100 million over the next three years to “deliver a full-electric product in every segment of the cold chain by 2023 in EMEA and 2024 in the Americas.”