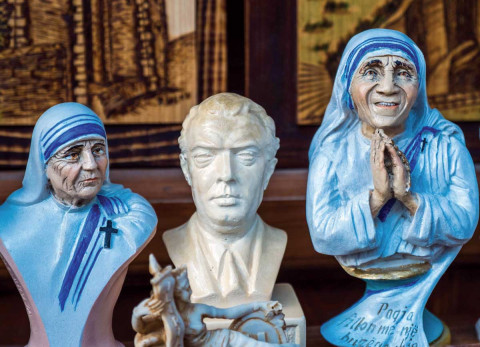 The life stories compiled by the Polish journalist Margo Rejmer in Mud Sweeter Than Honey resemble, at times, Dante’s Nine Circles of Hell in their escalating violence, contempt, lies, brutality and emptiness. These were the punishments that Enver Hoxha’s communist regime inflicted on Albanians from 1945 until its end in 1991. The experience of reading these testimonies of ordinary people – gathered orally – took me back to my own childhood in 1980s Albania.

It was a time characterised by the standardisation of everything: clothing, architecture, home furnishings. As one man interviewed by Rejmer jokes, ‘the dresses were all the same, the shoes were all the same, whatever flat you went into, everything looked the same. Thank God at least the wives can look different from one another’. Hoxha’s system also attempted to standardise thought. ‘Communism was in control, the propaganda was etched on people’s minds, and we lived in a trap’, recalls
a man from the village of Derviçan, who was arrested at 16 after trying to escape with three of his friends to Greece, ‘where people had television and cars’. A silly dream of freedom turned into a nightmare; his two companions were killed while crossing the border and he was put in prison. The person who had denounced them to the Sigurimi, Hoxha’s secret police, was their teacher.

In 1967, following the purges of Mao’s Cultural Revolution, Hoxha annihilated religion, demolishing churches and mosques or converting them into sports arenas and warehouses. In 1976 Albania became the first officially atheist country in the world. ‘The philosophy of Marxism-Leninism was imposed on us’, recalls the Catholic nun Sister Roza, ‘as people of communism we were all empty’.

The borders were shut and on every hillside concrete pillboxes were built to protect Albania against ‘foreign enemies’. Hoxha turned Albania into one ‘great big cage’, proclaiming that ‘we’ll eat grass before we bow to the pressure from foreign powers’. Over 6,000 Albanians were executed, with around 7,000 disappearing into forced labour camps. More than 1,000 political prisoners were never released.

The system’s primary weapon was fear. For it to last, people had to be afraid, to be kept quiet, which is one reason why the testimonies now collected in Rejmer’s book are so important. Bibika Kokalari, cousin of the writer Musine Kokalari, recalls how Musine was imprisoned in 1946. She suffered the humiliation of a public show trial conducted by the same despotic regime that had murdered her brothers and then kept her under surveillance for most of the remainder of her life. The fear of being spied on in turn conditioned Bibika’s behaviour so that she was acutely aware of any black car that passed her. Many Albanians believed the Sigurimi had access to a device that could read thoughts.

Despite this, people did try to escape, believing that death was better than life in Albania. Now 70, Zenel Drangu was captured by the Yugoslavian border police and returned to Albania. He was imprisoned for 16 years in the notorious mountainous labour camp Spaç, modelled on Stalin’s gulags. Spaç was a natural cage for prisoners. ‘It was in Spaç, that I first realised how strong a man can be, and how cruel! Guards tortured us against the rules, just for fun, as if they enjoyed our pain.’

Hoxha’s paranoia turned Albania into a fortress of communism, an edifice full of dark rooms where no one had the right to speak the truth. Neim Pasha remembers how ‘the system fed on the blood of Albanians, it was a bloodthirsty monster, constantly on the hunt for human flesh … The system wanted blood in order to survive, it needed our terror.’

Mud Sweeter Than Honey is essential reading for anyone wishing to understand Communist Albania where, whether outside or inside prison, one was never able to feel free. But Hoxha’s regime did end, eventually. To the testimonies Rejmer compiles, I would add one final one of my own; every 7 March on ‘Teacher’s Day’, my father, a history teacher in Tirana, received either a volume of the works of Enver Hoxha or a portrait of him. One year he was given a plaster bust of the leader. It ended up above the bufe (cupboard) found in every house. When 7 March came around and students’ visits were expected, the small bust would be brought forward to be seen by guests. But, over time, the back of the bust became mouldy and my father had to be careful to not let the mould on the leader’s back be seen. This routine continued for years, until one day an earthquake strong enough to dislodge the bust caused it to fall and break, thereafter disappearing from the cupboard forever.

Enriketa Papa-Pandelejmoni is Associate Professor of History at the University of Tirana.