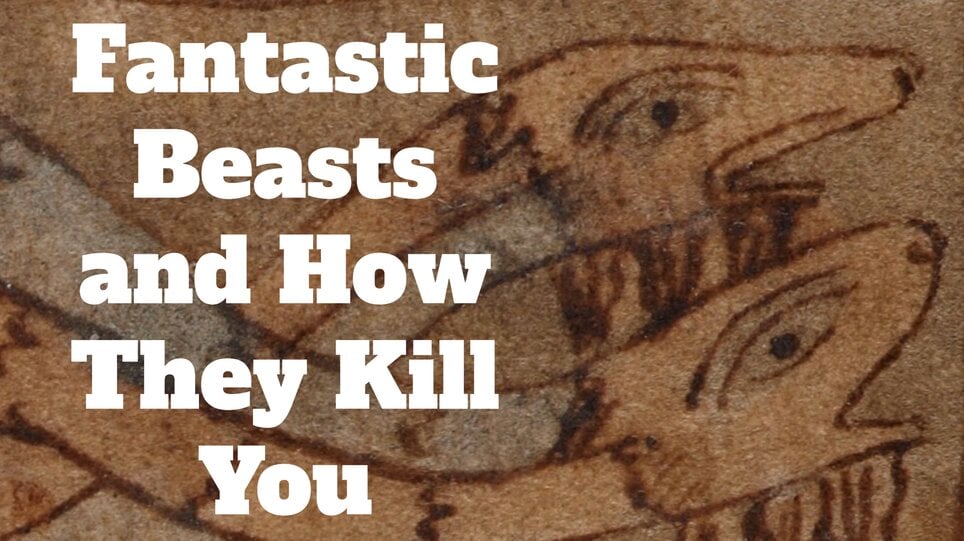 As Western Christians moved ever further south and east, they encountered not only new cultures, but new creatures. Stories of incredible and deadly beasts filtered back home in travel writing, legends, and bestiaries to amuse and astound readers who might never see these animals for themselves. Frequently, alongside descriptions of the beasts themselves, there are descriptions of the many ways in which they’ll kill you.

Many of the fantastic beasts collected in medieval writings derive from mythological stories of Greek and Roman culture. Hydras, centaurs, and sirens are listed beside more ordinary creatures, such as the asp. But at the far reaches of the world, ordinary cannot be taken for granted. In those mysterious places, like those described in The Wonders of the East, even the hens can kill you:

As you go towards the Red Sea there is a place called Lentibelsinea, where there are hens born like ours, red in colour. If anyone tries to take or touch them, they immediately burn up all his body.

Snakes with horns, giant ants, and cannibals also await, says the author, and those are just the small creatures:

Dragons are born there, who are one hundred and fifty feet long, and are as thick as great stone pillars. Because of the abundance of the dragons, no one can travel easily in that land.

If everything is so dangerous and ready to kill people, why travel at all? One certain answer is riches. Trade with faraway lands was the source of fine goods as well as fine stories in the Middle Ages, and tales of frightening monsters tend to go hand-in-hand with tales of vast treasures – some gold and jewels, some seemingly more humble:

In [the east], there is an abundance of pepper. The snakes keep the pepper in their eagerness. In order to take the pepper people set fire to the places and then the snakes flee down into the earth; because of this, the pepper is black.

While the pepper snakes are far-fetched, stories of real creatures would indeed have come through travelers, traders, and crusaders, and while some of them seem to have been a little muddled in the retelling, others have the definite ring of truth about them. In the same manuscript as The Wonders of the East, the (fictional) Letter of Alexander to Aristotle contains a description of an attack on Alexander the Great’s men as they swam in unknown waters:

…when they had swum about a quarter of that river, something terrible happened to them. There appeared a multitude of water-monsters [hippopotami], larger and more terrible in appearance than the elephants, who dragged the men through the watery waves down to the river bottom, and tore them to bloody pieces with their mouths and snatched them all away so that none of us knew where any of them had gone.

While Alexander lost two hundred men to hippos alone, he also says he had gained enough wealth by that point for his entire army to have gold-plated weapons and armor. That, and the glory of conquest, was reason enough to risk deadly beasts.

The Liber Monstrorum (Book of Monsters), in addition to its retelling of stories from classical myth, tells of crocodiles menacing others who traveled to Egypt in search of wealth:

In the river Nile they say that there are crocodiles, beasts of no mean size, which stretch themselves out in the heat of the sun on the banks, and are greedy for humankind if they sense any near when they are roused from their sleep. And these beasts lurk mostly in water and on the edges of shores.

In The Travels, written well over a century later, Marco Polo describes the vast wealth of the Far East, including gold, silver, and textiles, but also the dangers to be found there. In Kuizhou, he speaks of lions (probably tigers) and the danger they pose:

There are so many lions that no man can sleep outdoors at night, for the lions would eat him at once. And I will tell you another thing, too: when men are travelling along this river and stop somewhere for the night, unless they sleep well away from the bank the lions will come out to the boat, snatch a man from it, and drag him off to devour.

While a medieval traveler headed to the Middle East or further might not have gotten much practical information out of monster stories such as these, the fascination with deadly beasts made for hugely entertaining reading for armchair travelers. In fact The Wonders of the East, The Letter of Alexander to Aristotle, and the Liber Monstrorum were all copied and collected into one famous monster-loving manuscript (the Beowulf manuscript), and Marco Polo’s Travels were so popular that there are approximately 150 surviving copies – a very large number indeed.

Those Europeans who wanted to see more of deadly beasts from exotic regions might be lucky enough to see some if they were invited to visit a great lord or king’s menagerie. The Tower of London’s menagerie was established during the reign of King John, and held animals such as lions and leopards throughout the rest of the Middle Ages. Even as far away as Scotland, fantastic beasts could be found: the Earl Marischal kept a lion at Dunnottar Castle at one time, although the roaring is said to have disturbed his countess’ beauty sleep.

No matter how people encountered these creatures – in stories or in menageries – deadly animals delighted and fascinated humankind, just as they do today.

Danièle Cybulskie is the lead columnist of Medievalists.net and the host of The Medieval Podcast. She studied Cultural Studies and English at Trent University, earning her MA at the University of Toronto, where she specialized in medieval literature and Renaissance drama. You can follow her on Twitter @5MinMedievalist or visit her website, danielecybulskie.com.