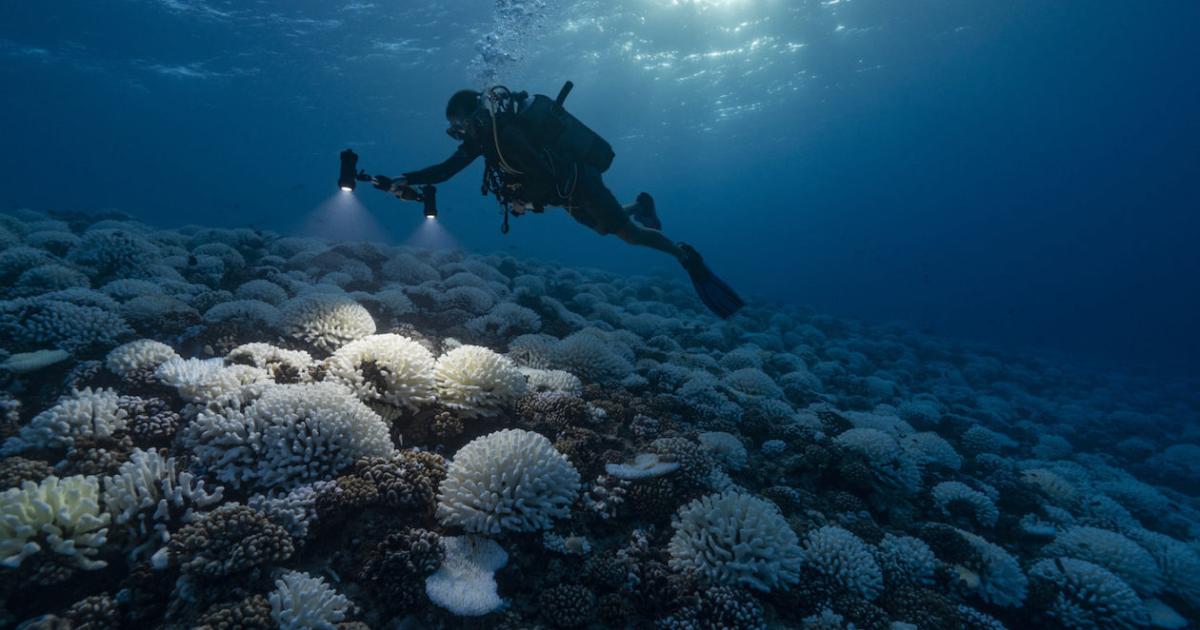 When ecological genomicist Christian Voolstra started work on corals in Saudi Arabia in 2009, one of the biggest bonuses to his job was scuba diving on the gorgeous reefs. Things have changed. “I was just back in September and I was shocked,” said Voolstra, now at the University of Konstanz in Germany. “There’s a lot of rubble. The fish are missing. The colors are missing.”

It’s a sad but now familiar story. Earlier this month, the Global Coral Reef Monitoring Network released the first report collating global statistics on corals, documenting the status of reefs across 12,000 sites in 73 countries over 40 years. Overall, they report, the world has lost 14 percent of its corals from 2009 to 2018 — that’s about 4,517 square miles of coral wiped out.

“If this had happened to the Amazon, if overnight it had turned white or black, it would be in the news everywhere,” said Voolstra. “Because it’s underwater, no one notices.”

Corals are facing tough times from global warming: Prolonged marine heat waves, which are on the rise, cause corals to expel their symbiotic algae (zooxanthellae), leaving the bleached corals weak and vulnerable. Local pollution continues to be a problem for corals, but global warming is emerging as the predominant threat. In 2018, the International Panel on Climate Change reported that 1.5 degrees Celsius of global warming would cause global coral reefs to decline by 70-90 percent (warming stands at 1.2 degrees C). A 2-degree C warmer world would lose more than 99 percent of its corals.

There are some hints of hope. The Global Coral Reef Monitoring Network report shows that corals can recover globally if given about a decade of reprieve from hot waters. Some spots — particularly the Coral Triangle in East Asia, which hosts nearly a third of global corals — have bucked the trend and seen coral growth. There are hints that corals might be adapting to warmer conditions. And research is burgeoning on creative ways to improve coral restoration, from selectively breeding super corals to spreading probiotics on stressed reefs.

“I’m hopeful,” said Voolstra. But it’s going to take a lot of quick action, he said, and even then we won’t be able to save all reefs. “That’s impossible. The point is you save some reefs so they can go through the dark ages of climate change.”

From 1978, when the Global Coral Reef Monitoring Network’s data collection began, hard coral on the world’s reefs held relatively steady for decades. That changed dramatically in 1998 with the first global mass bleaching event. Warm waters around the world caused in large part by a powerful El Niño wiped out about 8 percent of living coral globally, equivalent to a grand total of 2,500 square miles. “All the drama started in 1998,” said David Souter, coordinator of the Global Coral Reef Monitoring Network and a researcher at the Australian Institute of Marine Science in Townsville. “Corals are actually pretty good at sustaining short, sharp temperature increases, but when it starts to last months, we see real issues.”

Astonishingly, however, by 2010 global coral coverage was roughly back to pre-1998 levels. “That’s good news,” said Souter. “Even though reefs got knocked down, they got back up again.” When “old growth” corals are wiped out, the new ones that move in are often faster-growing, weedier species (just as with trees after a forest fire), said Souter. It’s great to have this growth, he said, but these opportunistic corals are often more vulnerable to disease, heat, and storms.

A global decline has largely been the trend since 2010, plunging corals back below 1998 levels. That’s due in large part to two more global bleaching events, in 2010 and 2015-2017, from which corals haven’t been given enough reprieve. There has been a tiny, 2 percent uptick in live coral since 2019, although it’s too soon to say if that might continue. “If you were a really optimistic person you might say that this occurred even while temperatures are high, so maybe we’re seeing adaptation,” said Souter.

During the long, relatively stable and healthy period for corals in the 1990s and early 2000s, the average reef was about 30 percent live hard coral and 15 percent macroalgae such as seaweeds and turf. That’s twice as much coral as algae. Since 2009, that ratio has slipped to about 1.5 as reef macroalgae has boomed by 20 percent. While seaweed also makes for a productive ecosystem, it’s not the same as the complex architecture made by reefs, and it supports different fish.

Encouragingly, the so-called Coral Triangle of the East Asian Seas stands out as a bold exception. This region holds almost a third of the world’s coral reefs — and it anomalously hosts more live hard coral and less macroalgae today than in the early 1980s, despite rising water temperatures. That’s thought to be thanks to genetic diversity among the region’s 600 species of coral, which is allowing corals to adapt to warm waters. “Perhaps diversity has provided some protection,” said Souter, while a healthy population of herbivorous fish and urchins are keeping seaweeds down.

The fact that the reefs retain the ability to bounce back, that’s amazing.

The other three main global regions for coral — the Pacific, holding more than a quarter of the global total; Australia, with 16 percent; and the Caribbean, with 10 percent — all host less coral today than when measurements started. “The Caribbean is a really tragic and desperate case,” said Voolstra, with only 50 or so species of coral and a new disease wiping them out.

It could all be worse, noted Souter. “Reefs are probably, on average, better off than I thought,” he said. “The fact that the reefs retain the ability to bounce back, that’s amazing.”

In the face of punishing conditions, coral conservationists globally are working to protect corals from pollution and actively restore them. One recent study, led by Lisa Boström-Einarsson of James Cook University in Australia, trawled through the literature and found more than 360 coral restoration projects across 56 countries. Most are focused on transplanting bits of coral from a flourishing spot to a struggling one, or “gardening” baby corals in nurseries and planting them out. They also include innovative efforts such as using electricity to prompt calcification on artificial reefs (an old but still-controversial idea), and using a diamond blade saw to slice tiny, fast-growing microfragments off slow-growing corals.

Other researchers are piloting projects to spray coral larvae onto reefs that need it most — this should be faster and easier than hand-planting corals, but it’s unclear yet how many of the larvae survive. “If it works, it will produce much greater gains more rapidly,” said Souter.

Boström-Einarsson and colleagues found an encouragingly high average survival rate of 66 percent for the restored corals in these 362 projects. But these happy numbers mask more sobering facts. Almost half of the projects were in just a handful of countries; most lasted less than 18 months; and the median size was a tiny 3.8 square miles. Worse, the coral gains were often temporary. In one case in Indonesia, a three-year project dramatically increased coral cover and fish — which were then decimated by a heat wave six months after the project ended.

Such efforts are still worthwhile and raise awareness about corals, said Voolstra. But some techniques could make them far more effective and far bigger in scale.

One bold strategy is to selectively breed corals to create super-strains best adapted to a warmer world — but this work is still very preliminary. “Corals take longer to breed and raise up than cows, so we have been betting more on finding heat-resistant individuals that are already out there than on making new ones in the lab,” said Stephen Palumbi at Stanford University, a marine biologist who focuses on corals around the Pacific Island nation of Palau. Palumbi has developed a tank that runs small samples of coral through a heat test on site, and is working to make it cheaper — in part, he said, by borrowing components from the home brewing industry. Voolstra, too, has developed a tool for on-site stress testing; he was this summer granted $4 million from the Paul Allen Foundation to take his effort global.

Heat tolerance, though, isn’t the only thing that corals need. Selecting the ones that can survive the heat might also inadvertently select ones that are less resistant to disease, for example, or slower growing. “We need to understand this better,” said Voolstra.

A different strategy is to tweak the organisms that live in and around corals and help them to grow, including the symbiotic zooxanthellae and bacteria. Getting corals to adopt heat-tolerant zooxanthellae is a great idea that could theoretically have a huge impact, said Voolstra, but it’s hard to do. The union is like an intimate marriage, and it’s difficult to shift. Changing corals’ bacteria, which tend to live on a mucous layer on the outside of the corals, is easier, and seems to boost overall coral health. “They bleach the same way but recover better,” said Voolstra. One recent study led by microbiologist Raquel Peixoto from King Abdulla University showed that lathering corals in probiotics could improve coral survival after a heat wave by 40 percent. “It’s still experimental and proof of concept,” said Peixoto, experimenting with robotic submarines that could drop slow-release probiotic pills onto reefs to release bacteria slowly over weeks.

A further-flung option being toyed with in Australia is the idea of brightening clouds over a reef in an attempt to shield them from extreme heat. “It’s totally left field,” laughed Souter, but should work the same way as cloud seeding for agriculture: A sprayed mist of seawater encourages clouds to form and shields the ground from direct light. This year researchers trialed the idea; they haven’t yet published their results. If it works, scaling up would be a massive project: they anticipate they would need a thousand stations with hundreds of sprayers each to lower solar radiation by about 6.5 percent over the Great Barrier Reef during a heat wave. Questions remain about whether the effort would be worth the energy cost, and what the net effects would be on ecosystems throughout the region.

A lot more work needs to be done on the real-world utility of these strategies, said Voolstra, to see what actually works. “Then you put truckloads of money into whatever really makes a difference,” he said. Different reefs will require different solutions, making all these strategies important said Peixoto. “It’s all hands on deck.”

In the meantime, Voolstra supports the idea of investing heavily in sanctuaries: spots, such as the Northern Red Sea, where corals are already adapted to handling hot waters but are threatened by other factors, such as sewage, pollution, construction and fish farms. Local efforts to tackle non-climate-related hazards for corals can be very effective. The Belize Barrier Reef Reserve System was taken off the list of World Heritage sites in danger in 2018, for example, after a push to protect that ecosystem and ban oil development.

If protecting a handful of refugia from humans doesn’t seem like a big enough effort, last year researchers also launched a project to build an emergency “Noah’s Ark” for corals across global aquaria, keeping their genetic diversity alive in tanks on land.

When the IPCC declared in 2018 that 99 percent of corals would be lost in a 2-degree C warmer world, said Voolstra, that was really shocking. The goal now is to whittle that 99 percent down to 90 percent or less, he said, so that reefs have at least a chance of bouncing back. “Whatever we do, it gets much worse before it gets better.”