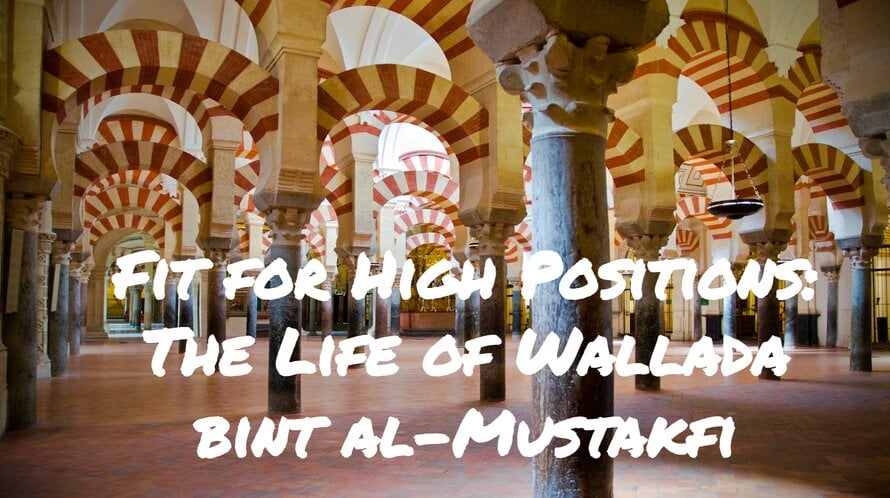 As the tenth century drew to a close and the eleventh century dawned, the Umayyad Caliphate was in its twilight years. Once a mighty empire, Umayyad strength was waning. Instead of a centralized government, the Umayyad empire comprised a number of city states, many of whom were beset by inner dissent and outside attacks. Despite this, Umayyad culture and scholarship flourished, and their courts were some of the most magnificent in the world. Courts were centers of art and luxury, and the sultans surrounded themselves with the most talented and beautiful people. To succeed at court, a person had to be refined and well educated and skilled in the arts. The most important of those arts was poetry. This is the story of one such poetess: Wallada bint al-Mustakfi.

Poetry at the Umayyad courts was used as a weapon, for seduction, and as high art. Poetry was used to slander and attack enemies both personal and professional. Skill with poetry could make a slave the mother of a sultan. To woo a lover, poetry was essential; it was through poetry that the poet could brag of their prowess and their devotion and extol the virtues of their beloved. The ability to write a poem was a key part of being courtly. Courtly love, which didn’t spread to Western Europe until the very late eleventh century, was practiced and originated here. The idea of having to suffer hardships and perilous journeys for the sake of a distant and unreachable beloved was a staple of the love poetry of the era.

Wallada bint al-Mustakfi (1001–1091) was the daughter of the infamous Muhammad bin ‘Abd ar-Rahman bin ‘Obayd Allah, who would later become Sultan Muhammad III. Her mother was probably Sukkara al-Mawruriyaa, a clever slave who, according to the gossip of the time, was a manipulative schemer and the real power behind Muhammad III’s throne. Whether or not this is true is difficult to say, as Sukkara barely merits a mention in the chronicles of the time. However, if true, Sukkara would have provided a template for her daughter, who would become one of the most independent women of her era.

Wallada’s childhood was fraught with strife. From the time of her birth until her majority, more than a dozen men ruled Cordoba, and Cordoba was attacked by Berber forces in 1013 and 1016. In 1024, Wallada’s father became the sultan, making his daughter a princess. Unfortunately, Muhammad was not very good at being a sultan. Though the Umayyad courts were known for their decadence, Muhammad III was a little too decadent. He was described as an oath-breaker, lazy, lustful, drunk, and a coward. He reigned for only eighteen months and then fled Cordoba in 1025. He was poisoned shortly thereafter.

After her father’s death, Wallada found herself the heir of his wealth and properties, making her independent and very rich. As an independent woman of leisure, Wallada set about living her life exactly as she wanted. She declined to veil herself when going out in public and wore shockingly sheer fabrics which, while common in other Umayyad courts, were positively obscene in Cordoba. The religious men of court squawked about her attire, but the rules of religious freedom in Cordoba meant that they couldn’t do much about it.

To further announce her intention to the world, Wallada had verses of her own poetry embroidered on her clothing. The right shoulder of her cape read:

“I am, by Allah, fit for high positions
And am going by my way with pride.”

“Forsooth I allow my lover to kiss my cheek
And bestow my kisses on him who craves it.”

When exactly she began styling herself this way is unsure, but it was a bold statement of her worth and autonomy. She backed up her bold words by starting a mixed-gender poetry salon in her home, where both her own works and the works of the poets she mentored were read. Despite being co-ed, Wallada’s salon was said to be extremely proper, even if the poetry being read wasn’t. Wallada’s salon and mentorship produced talented poets such as Muhja bint al-Tayyani (†1097), and Wallada herself wrote poetry to challenge the poetic master of the Cordoban court: Ibn Zaydun.

Ibn Zaydun (1003–1071) was an influential nobleman whose quick wit and silver tongue ensured his meteoric rise to prominence. When he and Wallada began their affair in 1031 he was an ambassador, and on good terms with the ruler of Cordoba, Abu al-Hazm. One of al-Andalus’s most popular love poets, Zaydun wrote hundreds of poems, many of them about Wallada. It is through Zaydun’s poetry that most of our information about Wallada survives. He described her at length, and thanks to him we knew that she had pale skin, red or blonde hair, and blue eyes.

At the beginning, Wallada and Zaydun had to keep their relationship a secret, and a great deal of their courtship seems to have taken place through poetry, no challenge for two of the greatest poets of the age. Zaydun, master of the love poem, wrote his typical fare praising his beloved, and, in a stark reversal of the gender norms of the time, Wallada wrote poems about the perilous journeys she undertook to visit him. Under the strictures of courtly love, it was the man who did the journeying, as well as the pining and instigation. The woman was not an overly active participant in this relationship, remaining a courtly ideal of love and beauty, virtuous and perfect in all things. It was a point of pride for a man to undertake a perilous journey to spend just one night with his love. That it was Wallada, not Zaydun, who undertook the journey speaks of a relationship that was unconventional for the time.

Unfortunately, unconventional didn’t mean happy, and Wallada and Zaydun’s relationship was tempestuous at the best of times. Zaydun beat her, had an affair with one of Wallada’s slaves, and viciously criticized her poetry. In return, Wallada attacked him in verse. Their relationship was short and rarely, if ever, happy, and Wallada turned to another.

That other was Abu Amir Ibn Abdus, a powerful minister at the Cordoban court. He wasn’t the brightest, and his poetry was subpar at best; Wallada and Zaydun had often made fun of him together, but something about Abu must have caught Wallada’s eye, because she moved in with Abu and lived with him until his death, though they never married.

Furious, Zaydun lashed out in verse. In a long, mocking poem called al-Risala al-hazliyya or “The Comic Epistle”, Zaydun, using a fictional Wallada as the narrator, viciously mocked Abu. Fictional Wallada was quite hard on Abu, calling him, among other things, ugly, stupid, boorish, and “endowed with putrid breath”. Zaydun sent the letter to Abu, as well as to a number of other people, and the letter became very popular, making Abu the butt of jokes city-wide.

And to Wallada, Zaydun must have seemed terrible. Wallada was fiercely independent. That Zaydun would put his own words in her mouth and use her to attack Abu would have been a deep betrayal. Wallada’s poetry to Zaydun, the account of her coming to him in the night, which “contains a secret best,” had been a statement of her agency and equality in their relationship. Zaydun’s attack against Abu showed that Zaydun viewed Wallada as a thing to be used, and not as a person. Abu wasn’t going to take Zaydun’s insult lying down, and he had Zaydun thrown into prison for plotting to remove Abu al-Hazm in favor of an Umayyad. Zaydun languished in prison for two years, continuing to write poetry dedicated to Wallada, until he escaped to Seville. Once in Seville, Zaydun regained his former glory in a new court and continued to write brilliant poems, most of them about Wallada.

After the incident with Zaydun, Wallada largely fades into obscurity. Her poetry salon remained open, and she mentored many young female poets, including Muhja bint al-Tiyyani, the other major poet to write about her and the final footnote to Wallada’s story. Muhja was the daughter of a fig seller who, by virtue of her poetic skills, rose to prominence in Wallada’s salon. Wallada was, reportedly, quite fond of Muhja, writing her love poetry so explicit that it was purposefully lost. Much of Muhja’s poetry is lost or available only in Arabic, but one of the few poems remaining from her is addressed to and about Wallada. In the poem, she accuses Wallada of promiscuity and having a child out of wedlock. This poem is frequently taken to be the results of a falling out between the two women, and while it is definitely possible that Wallada and Muhja were lovers, it is unsure, because that part of Wallada’s life, like so much of it, was erased by the people who came after her.

Other than a few mentions in contemporary chronicles, Wallada largely disappears from the historical record. She lived into her 90s, and she was briefly reunited with Zaydun when Cordoba was invaded by Seville in 1070. After her death, Wallada was forgotten and much of her poetry “lost”. Had it not been for Zaydun and Muhja’s poetry, she may have been forgotten entirely. Though she wrote poetry until her death, only eight of her own poems survive.

Irene Cox-Carstairs is the founder and head writer for thathistorynerd.com. You can follow her on Twitter @CarstairsIrene