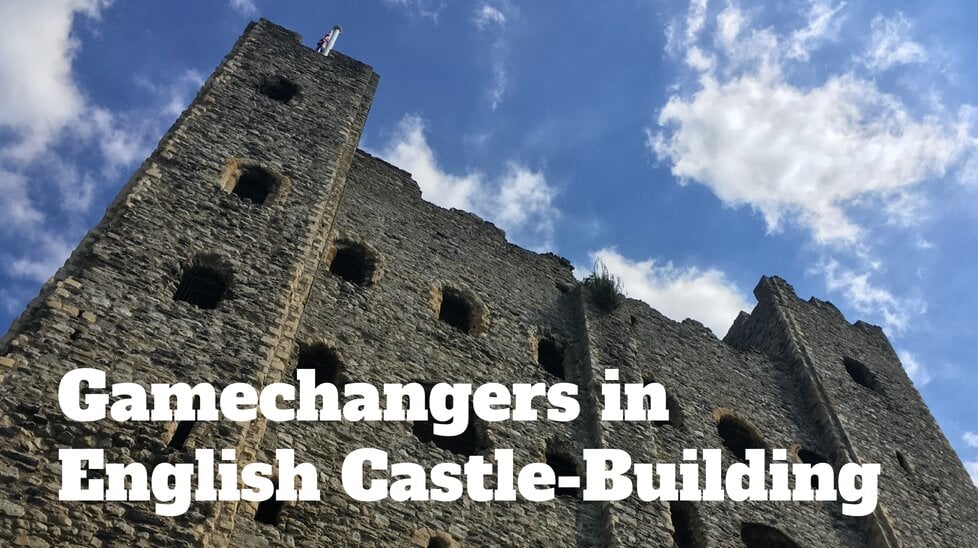 Castles are fascinating feats of architecture, bringing form and function together in a way that is as beautiful as it is deadly. As the nature of warfare changed, so did the design of English castles, and with them, history itself. Here are five changes in English castle design that had a big impact on history.

Prior to 1066 CE, English castles were mainly wooden structures in the motte and bailey style, with a keep on a hill (artificial or natural), and a courtyard or town with a palisade around it. When the Normans invaded, they immediately set about building castles in stone, to strengthen their hold on the land not only defensively, but also psychologically. The first Norman castles to be built in England, including Rochester Castle, Dover Castle, and the White Tower, dominated the landscape for miles around with their great height and imposing silhouettes.

While the word we now use for the building in the center of the fortification is “keep”, the Norman word is donjon, giving us the English word “dungeon”. Although the English were no strangers to fortification for defense, the Norman stone donjons had a profound psychological impact on the population, with their air of permanence, and the implication that the invaders were now the ones preparing to defend themselves against the hostile natives. “Dungeon” has no positive implications to this day.

Early Norman castles in England often followed a simple square or rectangular design. While this design is relatively easy to map out and build, it leaves corners vulnerable to both undermining (sapping) and the use of thrown projectiles from siege engines such as mangonels and trebuchets. The other serious disadvantage to this design is that destroying one corner could easily mean the collapse of two walls, a breach that would be seriously difficult to defend.

The rebels holed up in Rochester Castle in 1216 came face-to-face with this particular weakness when the army of King John sapped the southeast corner tower, famously using pig fat to burn the wooden supports his miners had used to shore up their tunnel. The corner tower fell, and with it, a section of wall on either side. Miraculously, the rebels held the breach, only to surrender later on account of starvation. When peacetime came again, Rochester Castle’s southeast tower was rebuilt, this time using a stronger, round design. Fifty years later, it successfully withstood another siege. The outer walls of Rochester’s medieval keep still stand, and still feature three angular corners and one round one. John’s son Henry III’s castles, not surprisingly, consistently feature round towers.

Henry III’s son, Edward I, in turn made a careful study of castle defense, applying what he learned to one of English history’s biggest periods of castle-building during his subjugation of the Welsh. Not only did his new castles feature round towers (or sometimes polygonal towers), but some also featured extensive concentric designs, including walls and moats. One of these castles, Harlech, was to prove as hard to breach as it was to keep.

During Edward’s lifetime, Harlech was besieged, but never breached; however, in the early years of the fifteenth century, it fell to a long siege by Owain Glyndŵr, becoming the headquarters for the Welsh rebellion that destabilized Henry IV’s reign. Within a few years, it once again fell, this time to the future Henry V. The length of both of these sieges suggests that, though Harlech’s concentric walls kept it from being breached by force, it suffered from a fatal flaw: not enough space to hold supplies. The fall of Harlech marked the beginning of the end of Glyndŵr’s revolt, and signaled Henry IV’s domination of the Welsh.

As with Harlech and Rochester Castles, one of the most lethal weapons in siege warfare is starvation, as people inside the walls run out of provisions. While most castles ensured they had a water supply in the form of a well or tanks to hold rainwater, only so much food could be stored in a castle at any given time. Two notable English castles took advantage of the soft ground under their foundations in order to dig passages for resupply and raiding: Dover’s defenders tunneled into the chalk of the cliffside, while Nottingham’s dug into sandstone.

While Dover’s medieval tunnels didn’t see much dramatic use until the Napoleonic Wars, Nottingham’s tunnels were a political gamechanger for the young Edward III. After years of being under the thumb of his mother’s powerful lover, Roger Mortimer, Edward used Nottingham’s tunnels to breach the castle by stealth, surprising Mortimer and capturing him. Mortimer’s subsequent execution marked the moment Edward III took control of England and came into his full power as one of her most revered kings.

In the period following Edward III’s rule, guns and cannons were increasingly used in sieges, to devastating effect. Suddenly, the tall imposing towers of the past were easy targets, so new English castles, especially coastal ones which were vulnerable to ships’ cannons, were built with a lower profile as the Middle Ages waned. These new castles relied upon past innovations, using rounded bastions to reduce the damage wrought by cannon fire, and concentric rings of curtain walls, like tiers.

Three of Henry VIII’s fort-like castles – Deal, Sandown, and Walmer – were besieged in the Civil War, but all three withstood until the defenders were forced to surrender, showing that even the strongest castle is only as strong as the morale within it. Built for defense alone, no longer for the rich and powerful to dwell in, these squat, strong structures signaled the end of the true medieval castle.

As a writer, professor, TEDx speaker, and podcaster, Danièle has been making the Middle Ages fun, entertaining, and accessible for over a decade. You can learn more about Danièle and her latest work on her website, or follow her on Twitter @5MinMedievalist

This article was first published in Medieval Warfare magazine Issue VII:2 – you can buy that issue here. You can also get new issues of the magazine through our Patreon – click here to learn more.