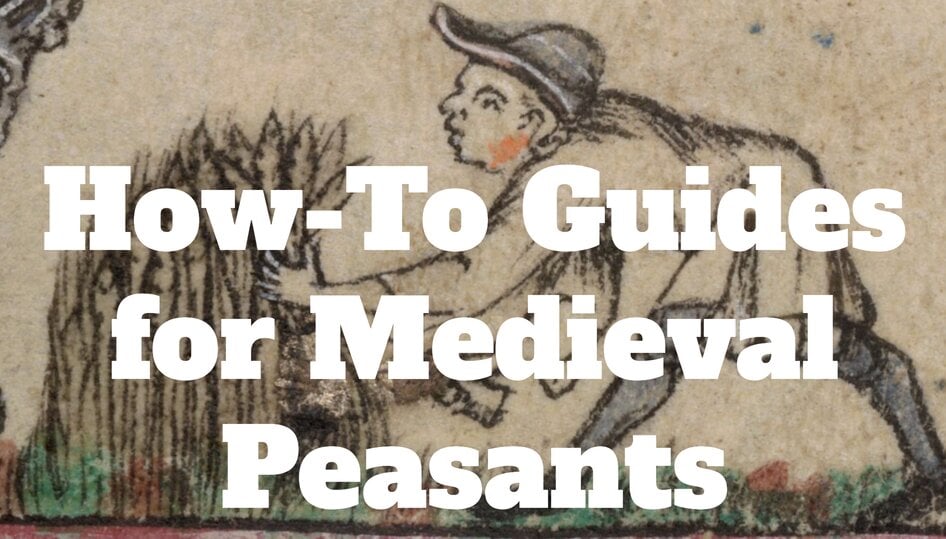 Agriculture was the cornerstone of the medieval economy. Dozens and dozens of medieval manuscripts concerned with agronomy highlight the various techniques peasants used across Eurasia to tend to their crops and animals. In this article, we introduce you to five of these manuscripts: one from sixth-century China, one from tenth-century Byzantium, two from al-Andalus at the time of the Arab agricultural revolution, and one from thirteenth-century England. Which one would you read first?

The Qimin Yaoshu 齊民要術 is one of the oldest agronomical treatises of China. Its title means “Important methods to condition the people’s [living].” The treatise was written in the sixth century by Jia Sixie, a government official who lived in Northern China. Nothing is known about the author, except that he had observed farming practices and techniques during his career, that he had first-hand experience with sheep-rearing, and that he had read several treatises of agronomy before drafting his own – in which he frequently quoted and referred to his predecessors. The Qimin Yaoshu covers expected topics such as planting crops and vegetables, breeding cattle or ploughing techniques. In one chapter, Jia Sixie writes about mulberry trees, essentials in sericulture – the rearing and processing of silkworms. The author also discusses the preparation of products like wine or oil, dyestuffs, ink, yeast, sugar and soy sauce! We’ll quote here a translation of Jia Sixie’s recipe for a meat condiment:

For meat condiment: beef, mutton, venison, hare (or meat of any game) will do; always use good, freshly slaughtered meat. Pick away fats, and mince finely. (Meat aged or dried is not good; fat makes the product over-unctuous.) Dry some wine starter in sunshine, when very dry, pound fine and sift. Take 10 parts of finely-chopped meat, 5 of starter powder, 2.5 of white table salt, 1 of yellow mould (pounded fine when dry and sift). Mix well in a pan, then move into a pottery jar (Pound bony parts well before adding. Marrowy bones will make the condiment greasy.), seal with mud and bake in sunshine. If made in winter days, bury the jar in millet chaff [to keep warm]. Check the mixture after 27 days, and if no further gases from the starter are visible, the condiment is ready.

You can read a translation of the work by Shih Sheng-han – A Preliminary Survey of the Book Ch‘i Min Yao Shu: An Agricultural Encyclopaedia of the 6th Century (Beijing Science Press, 1962).

The Geoponika consists of twenty books on agriculture compiled in the tenth century for the Byzantine Emperor Constantine VII Porphyrogenitus. The book gathers prior agronomical treatises and borrows from the classical tradition. Written in Greek, the language of the Byzantine Empire, the Geoponika covers an extensive agronomical ground, going from meteorology to the labours of the months, from cattle to plant diseases. Several chapters are devoted to viticulture and winemaking, as well as to olive cultivation and oil making, two important sources of revenues in the Byzantine Empire. The chapters of the Geoponika on viticulture were translated into Latin in the twelfth century, but the entire manuscript only made its way to Western Europe in the Renaissance, through Latin, Italian, French and German translations.

Book XIII of the Geoponika discusses pests and pest control. The anonymous author reports some peculiar practices used by peasants to get rid of field mice:

Take a piece of paper and write on it: I conjure any mice caught here to do me no harm and to prevent other mice doing so. I give you the following land (and name it). If I find you still here, I take the Mother of the Gods to witness, I will cut you into seven pieces. After writing this, fix the paper before sunrise against a natural rock in the field where the mice are (the writing must be visible on the outside). I include this instruction rather than omit anything, but I reject such practices (may they not be true!) I advise others to do the same, and never to use such ridiculous methods.

You can read a translation by Andrew Dalby – Geoponika: Farm Work. A Modern Translation of the Roman and Byzantine Farming Handbook (Prospect Books, 2010)

You can read from the Geoponika in Medieval Beekeeping

The Arab Agricultural Revolution unfolded in the eleventh and twelfth century in the Islamic Mediterranean. In al-Andalus (Southern Spain), several eminent agronomists, botanists and arboriculturists gathered to experiment with new irrigation or grafting techniques and wrote impressive treatises on agriculture. In this section, we’ll introduce you to two of these prominent specialists.

The first one is Abū ‘Abd Allāh Muḥammad ibn Ibrāhīm ibn Baṣṣāl al-Ṭulayṭulī, who was born c. 1050 in Toledo. The name Ibn Baṣṣāl means “he who tends bulbs”. Ibn Baṣṣāl authored the Dīwān al-filāḥa (An Anthology of Agriculture), an impressive collection of knowledge on agronomy. During his lifetime, Ibn Baṣṣāl travelled to Sicily, Egypt, Syria, Iraq, Persia, and northern India, where he observed the various plants and agricultural techniques. He probably brought back some species to Toledo, to be planted in the botanical gardens of Toledo, where Ibn Baṣṣāl conducted his experiments. The peculiarity of his Dīwān al-filāḥa is that the manuscript relies little on prior knowledge. Rather, it features the author’s own experiences and observations. Right before the capture of the Toledo taifa by the Christians in 1085, Ibn Baṣṣāl moved to Seville. There, he joined a group of agronomists and scholars and adapted his Anthology into a shorter manuscript, the Kitāb al-qaṣd wa’l-bayān, or The Book of concision and clarity, translated into Castilian in the thirteenth century.

Among his students and continuators was Abū ’l-Khayr al-Ishbīlī, nicknamed Al-Shajjār, meaning ‘the tree-planter’ or ‘the arboriculturist’. Little is known about Abū ’l-Khayr, but he might have worked in the king’s experimental gardens in Seville alongside the most eminent agronomists and botanists of his time. Drawing on his predecessors and his own experiments, Abū ’l-Khayr wrote a Book of Agriculture (Kitāb al-Filāḥa) discussing soil, manure, irrigation, grafting techniques, pest control and various horticulture-related topics. Abū ’l-Khayr was extremely well-versed in the cultivation of olives to which he devoted several pages and in which he included cute anecdotes, such as this olive tree believed to be at least 3,000 years old:

Credible people claim to have seen, on one of the plateaux of Syria, an olive-tree which was not less than three thousand years old, dating to the reign of Pharaoh.

Excerpts of this Book of Agriculture can be found on the Filāḥa Project website.

Watler of Henley was an English agronomist of the thirteenth century. He wrote, c. 1280, a treatise in French, Le Dite de Hosebondrie. The manuscript is known today as The Husbandry. Walter may have worked as an estates manager or a bailiff in the south of England before writing down his book, which is much more concerned with estate management than with actual agriculture or agronomy. Its opening sentences are fairly clear on that matter: “This writing teaches the way in which a man ought to direct bailiffs and provosts about rendering the account of a manor, and how a man ought to look after a manor.”

The Husbandry is quite short. Henley discusses how to make a profit from farming, how to measure the land, how to ensure that employees accomplish their tasks properly, how much milk a cow or a ewe should yield.

One of its most famous chapters discusses the tasks and responsibilities of the dairymaid and highlights the role of women in medieval agriculture. Even at manors without dairy, wrote Henley:

it is always good to have a woman there, at a much less cost than a man, to keep the small animals there and what there is within the court, and answer for all products there as a dairywoman would – that is to say, when the sows farrow for their pigs, for peacocks and their chicks, if there are any, for geese and their goslings, for capons, cocks, hens, and their chickens and eggs – and she ought to answer for the half of the winnowing of the grain also as the dairywoman.

The Husbandry was translated and edited in the late nineteenth century. The edition is available on Archive.org.