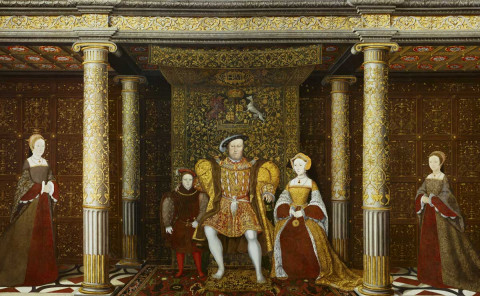 In the Tudor court disabled people were hidden in plain sight and are often forgotten in histories of the period. Thomas More, for example, had a disabled man, Henry Patenson, living with him like a son. Patenson is depicted in the Notley Priory painting of the More family and was treated as ‘Master Harry’, as though he were a member of the More family. It is thought that Patenson had a learning disability and was what the Tudors would have considered a ‘natural fool’.

The phrase ‘natural fool’ was juxtaposed with ‘artificial fools’ – jesters, clowns and entertainers. The majority of disabled people were looked after by their families or in hospitals or monasteries. Both ‘natural’ and ‘artificial’ fools were employed at the royal court as domestic fools, cherished as much for their mental or physical differences as for their antics. There were some ‘natural fools’, however, who became prominent members of the Tudor court and were allowed access to the monarch denied to other courtiers, because of their learning disabilities and their ability to speak honestly, without an agenda.

The paintings held in Hampton Court Palace show that disability was a part of royal life. On either side of the family of Henry VIII in a portrait from 1545 are two figures. On the right, dressed in a green velvet gown and red hose, standing behind the young Princess Elizabeth, is the king’s companion, close confidant and adviser, William Somer, who was valued for his frank opinions. ‘Few men were more beloved than was this fool’, wrote the playwright Robert Armin in 1608. On the left is a young woman, believed to be Jayne Foole, wearing Dutch-style clothing and sporting a shaved head beneath her linen coif and bonnet.

Both individuals were considered companions, rather than servants or professional entertainers, when they were brought to court during the tenure of Anne Boleyn. Like Somer, Jayne is thought to have had an intellectual disability, possibly Down’s syndrome. Few biographical details – her full name, date or place of birth – are known about Jayne. Elements of her life are recorded through household accounts, though, such as the inventories of clothes commissioned for her from the Accounts of the Great Wardrobe and the Privy Purse expenses of the monarchs. Jayne did not work, nor was she noble. She had a care assistant or ‘keeper’, who was responsible for and looked after her, paid through household accounts, implying that she was unable to care for herself.

One moment in Jayne’s life is described, however, that illuminates her place and value, as well as some details of her background. In the state papers of Henry VIII is an anonymous letter (written with a critical view of the new queen) that describes an incident on 1 June 1533 at Anne Boleyn’s coronation.

The letter explains how, during the procession to Westminster, the crowd did not take their bonnets off to cheer for their new queen: ‘Though it was customary to kneel, uncover, and cry “God save the King, God save the Queen”, whenever they appeared in public, no one in London or the suburbs, not even women and children, did so on this occasion.’ There is a rumour that the crowd were paid to lift their hats and shout out tributes to the queen. The letter describes one of the queen’s servants – ‘her fool’ – telling the mayor to command the people to cheer. The mayor replied that he could not command people’s hearts and that even the king himself could not make them do so. Anne’s fool, the letter-writer continues, ‘who had been to Jerusalem and spoke several languages, cried out, “I think you have all scurvy heads, and dare not uncover”’.

It is revealing that Jayne had travelled to Jerusalem and that she was able to speak several other languages. This disclosure implies that Jayne had been educated and in the care of benefactors who could afford to travel with her.

There is no record of Anne commenting on Jayne, although the new queen did complain to Henry after the parade that no one had shouted for her or removed their bonnets. It is striking that Jayne had been brazen, standing up for her mistress loudly and in public. As well as suggesting a degree of loyalty between them, this act also indicates that Jayne was allowed the freedom to behave as she liked.

Anne Boleyn had taken Jayne into her household, cared for her and paid for her upkeep and clothing, just as Henry had done with William Somer. She continued to do so as long as she was able. In May 1536, from accounts of ‘The Queen’s Reckoning’, is a list of debts owed by Anne Boleyn at the time of her death, which show that she had ordered and commissioned ‘25 yds. of cadace fringe, morrey colour, delivered to Skutt, her tailor, for a gown for her Grace’s woman fool, and a green satin cap for her’.

When Anne Boleyn’s household was dissolved and dismissed following her execution, Princess Mary took Jayne in. She was cared for by a handful of royal women, including one who would later become Henry’s sixth wife, Katherine Parr, who bought her a flock of geese to look after and to herd around the palace gardens so that she might be occupied. Jayne Foole then disappears from the records.

Before the rise of ‘natural fools’ like William Somer and Jayne Foole, fools were clothed to represent their position and to meet practical demands. Now, natural fools were adopted in a new kind of role, lavishly dressed to set them apart from the other servants, as so-called ‘pets of the court’.

Phillipa Vincent-Connolly is the author of Disability and the Tudors (Pen & Sword, 2021).