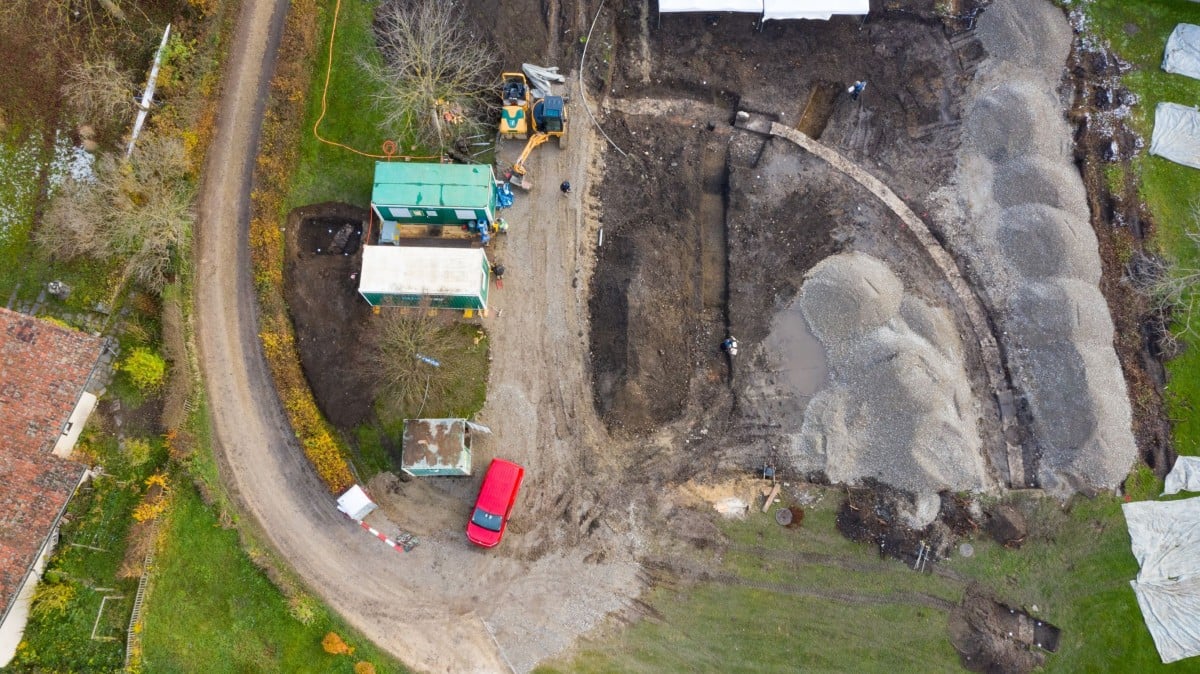 Archaeologists in Switzerland have discovered the remains of a Roman amphitheater, which they believe dates to the fourth century AD.

The remains were uncovered in the town of Kaiseraugst, located along the Rhine River in northern Switizerland. The archaeologists were monitoring construction work for a new boathouse of the Basel Rowing Club. They were expecting to find remains of a Roman quarry, but were surprised when an oval ring of walls were uncovered.

The function of the oval ring of walls was initially unclear and only in the course of the excavation did it become clear that this was a Roman amphitheater. The complex is around 50 meters long and 40 meters wide and is located in the valley of a quarry that was abandoned in Roman times, immediately west of the Kaiseraugst fort, the Castrum Rauracense.

A large gate was uncovered to the south of the complex, which was flanked on both sides by two side entrances. The threshold made of sandstone blocks from the western side entrance was still preserved. On the west side of the complex there was another entrance to the arena, again with a large sandstone threshold. The inside of the arena wall was plastered. The grandstands consisted of a wooden construction, from which the imprint of a wooden post could still be proven.

All the evidence together, the oval, the entrances and the post placement for a tribune, speak for the interpretation as an amphitheater. Due to the building materials used, the finds and the fact that it was built in an abandoned quarry, it dates to late antiquity, probably to the 4th century AD. This makes it the youngest known amphitheater in the Roman Empire. The monument thus underlines the importance of the Castrum Rauracense in the 4th century AD.

After the one in Vindonissa (Windisch), the Kaiseraugst amphitheater is the second amphitheater in the canton of Aargau. It is the third such monument in the Roman town of Augusta Raurica. Eight such buildings are now known throughout Switzerland. In addition to Vindonissa and Augusta Raurica, there is an amphitheater in Avenches (Aventicum), Martigny (Forum Claudii Vallensium), Nyon (Colonia Iulia Equestris) and on the Enge peninsula in Bern (Brenodurum). In Roman times, games such as gladiator fights and animal hunts were presented in the arenas, which were very popular at the time.

The Basel Rowing Club has agreed that the construction project will now be adapted in such a way that the Kaiseraugst amphitheater will be preserved in the ground. The archaeological substance is protected by a dam. The new building will be erected above it. The monument thus remains in its original place so that it is preserved for the future.