The remains of a vividly frescoed domus under the Baths of Caracalla in Rome have opened to the public for the first time. The two-storey domus was built during the reign of Hadrian in the 2nd century, part of an upscale neighborhood adjacent to the Capena Gate that was demolished in 206 A.D. to make way for the great public baths that would be built during the reigns of the emperor Septimius Severus and his son Caracalla between 212 and 217 A.D. There is evidence that the structure underwent several phases of renovation and alteration, including being subdivided into an apartment building with an elegant luxury domus on the ground and first floor and apartments for the high middle class on the upper floors.

The rooms were vividly painted with faux architectural panels, animals, objects, floral elements, figures and landscapes in a style that was fashionable in the mid-2nd century. One room’s decorations are striking examples of Roman religious syncretism, depicting images of Greco-Roman and the Egyptian gods whose cults had a wide following among the Roman upper classes.

This room was initially believed to have been the lararium, the space dedicated to the worship of the gods of the household, but study of the imagery found that it was a devotional space that at different times was dedicated to Roman and Egyptian deities. The fresco of architectural vistas with human

figures, the Capitoline triad of Jupiter, Juno and Minerva, and Dionysus is the older of the two, dating to between 134 and 138 A.D. The other contains depictions of foreign gods — the jackal-headed god of the dead Anubis, Isis with a lotus flower and feathers, a barely visible Serapis — and was painted in the last decades of the 2nd century.

The remains of the structure were first discovered during the excavation of the eastern palaestra of the Baths in the 1860s and 1870s. Hundreds of fragments of ceiling frescoes were recovered in excavations of the triclinium (the dining room) of the domus in 1975. The fragments were recovered and some of the frescoes in the other rooms detached for study and conservation.

A recent campaign of stabilization, restoration and reinstallation of the removed frescoes has made it possible for the domus to open to visitors as a stop in the tour of the Baths of Caracalla. The fresco on the vaulted ceiling of the triclinium has been pieced back together and displayed for the first time at the new entrance to the domus.

Director of the Baths of Caracalla, Mirella Serlorenzi, explains what makes this building, dubbed “the house where the gods lived together,” unique: “The presence in the same environment of Jupiter, Juno and Minerva together with Anubis, Isis and probably Serapis is the sign of that religious syncretism typical of ancient Rome since its foundation. 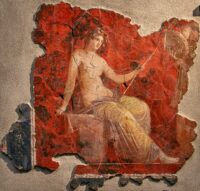 But the rooms we are now opening are of great interest also because they show the microcosm of a private house and the macrocosm of a large imperial facility, the Baths of Caracalla, at a distance of a few meters from each other. A suggestive comparison that prompts us to present a small preview of the ceiling of a second room of the domus, the Triclinium, now the subject of studies and research for its overall restoration.”