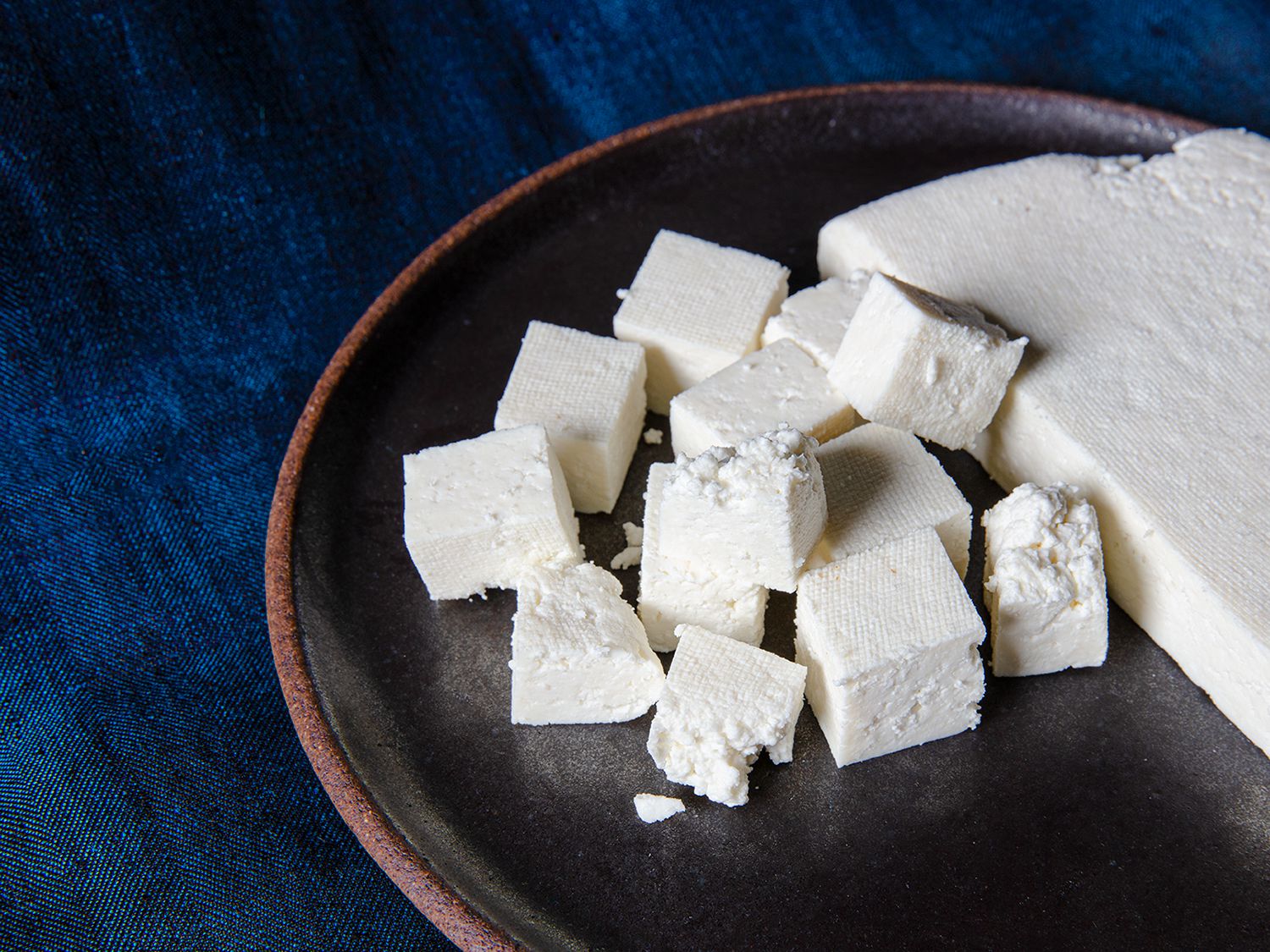 Paneer is one of my favorite sources of protein. It can be used in a variety of ways, and it’s very easy to make yourself. While it’s often described as a cottage cheese, paneer is a firm, fresh cheese that has a texture more akin to feta than anything else. Paneer is also an unsalted cheese, so it must be salted when it’s cooked, and as a consequence it’s often marinated or cooked in flavorful liquids so that it can absorb both salt and seasonings.

Making paneer, along with cooking eggs, is one of the most direct and obvious visual examples of how proteins change their physical structure during cooking. Paneer is prepared by heating milk and then stirring in an acid coagulant, like lemon or lime juice, which causes the milk to separate into curds and whey. The curds, which consist mostly of protein, are collected, rinsed, and then compressed to form a dense cake that can then be cut and cooked.

However, while paneer is a very easy to make at home, making a firm paneer is a little trickier. I’ve received many emails over the years from readers complaining about this, and I’ve seen similar complaints on online forums: the paneer ends up too soft, more like ricotta in texture and consistency than feta. I’d always assumed that people weren’t putting enough weight on the drained cheese when compressing it, but, on the other hand, when I made paneer in India, the issue of this soft texture never came up: the paneer was always firm enough to be cut easily. When I was working on my most recent cookbook, The Flavor Equation, I wanted to see if there was a way to understand what the problem was and figure out a way around it.

Ultimately, the answer I came up with was the type of milk used to make paneer in India is different from the kind of milk available in the US. In India, milk is generally sourced from buffalos; in America, milk is usually sourced from cows. In cooking and food writing, there’s a tendency to make generalized statements about classes of ingredients (like the role acids play in marinades), but that tendency often glosses over some of the details that can explain why things might or might not work. All mammals produce milk, but the composition of different milks, and their relative amounts of calcium, fats, and sugar can vary considerably. Cow’s milk contains significantly lower amounts of calcium than buffalo’s milk (0.12% and 0.19%, respectively), and calcium plays an important role in the process of protein denaturation, which is essential for paneer’s preparation.

Proteins are polymers of amino acids and these amino acids also carry electric charges. Similar electric charges repel one another while opposing electric charges attract each other. Milk is an oil-in-water emulsion in which fat globules are trapped in water, with the milk proteins acting as emulsifying agents. When an acid like citric acid is added to hot milk, it contributes negative charges to the amino acids in the proteins in the milk, which begin to repel one another, forcing the proteins to stretch and change their shape—in other words, they denature. Denatured proteins aren’t able to act as an emulsifying agent, so the emulsion separates into insoluble white solids, called curds, and a pale yellowish-green liquid, called whey, which contains all the soluble stuff in the milk. When the curdled milk is heated, the proteins coagulate, that is they link up with one another and form a solid network, which makes them aggregate into larger curds.

Calcium Concentration and Its Effects on Paneer

Calcium is present both in free form and in bound form in milk proteins (the major milk protein, casein, is a rich source of calcium). The free form of calcium protects the negatively charged amino acids on the milk proteins, and this helps increase the aggregation of the milk proteins: the curdled proteins form a tighter and thus stronger structure, which will help to produce a firm paneer.

Since cow’s milk contains less calcium than buffalo’s milk, I thought that increasing the amount of calcium in cow’s milk would yield firmer paneer. Calcium chloride is commonly used in the production of cheese, and it’s the perfect tool to easily increase the amount of calcium in cow’s milk to make paneer, since it’s also an acidic salt. When added to milk, calcium chloride will decrease the pH of milk and help with the curdling of the milk.

Even though the calcium content of cow’s milk is the main culprit behind paneer that’s soft and crumbly, to make a firm paneer you still need to compress the curds.

To effectively compress the paneer and shape it into a firm, sliceable block, you need to apply a relatively large amount of force, which means you need to weigh the paneer down with a significant amount of weight. A 5-quart Dutch oven with its lid, which weighs about 5 pounds, depending on the manufacturer, with a single 28-ounce can of tomatoes (so, just under 7 pounds) placed within it or on top is just barely sufficient to produce a firm, sliceable block of paneer. For even firmer paneer, you’ll want to add more weight, either by filling the pot with water, adding additional heavy, canned pantry staples, or using literal weights.

For ease of cleanup and convenience, I place the curds on a rimmed baking sheet and set the weight on top of them.

I often get asked about salt and paneer, namely why I don’t add it to the milk. The answer is simple: Any salt you add to the milk will be rinsed away when the curds are rinsed thoroughly. Brining the paneer or adding salt after the cheese is pressed isn’t useful either because the paneer ends up becoming extremely tough.

It’s also ultimately unnecessary to season the paneer, since it acts like a sponge, quickly absorbing seasoning and salt when simmered in flavorful liquid or marinated.

I now use this new and improved method for making paneer all the time at home. The results are exactly like store-bought, firm enough to be cut yet full of that rich and creamy flavor. And now I no longer need to deal with the softer textured paneer that falls apart during cutting and cooking. This paneer works wonderfully in dishes like palak paneer and grilled paneer kebabs.

Recipe is adapted from The Flavor Equation by Nik Sharma, Chronicle Books, October 2020.

Combine milk and calcium chloride in a large, heavy-bottomed, nonreactive stainless steel saucepan and stir to combine. Heat milk over medium heat until an instant read thermometer inserted into the milk reads 185°F (85°C). Add lemon juice, stir, and turn off heat. The milk solids will separate and into white curds and a yellowish whey.

Line a large fine-mesh sieve with a layer of cheese cloth and set it over a large bowl. Strain the curdled milk through the sieve to collect the solids; discard whey, or reserve for another use. Rinse the solids in the cheese cloth thoroughly by running cold tap water over curds. Grab the ends of the cheese cloth together, squeeze tightly to drain excess water, and hang the cloth with the milk solids over a sink or a large bowl at room temperature for 1 hour.

Place drained paneer on a rimmed baking sheet. Place a heavy weight of no less than 7 pounds on top of the paneer (a 5-quart enameled cast iron Dutch oven with several 28-ounce cans of tomatoes on top of its inverted lid should be sufficient). Let paneer compress for at least one hour, and up to two hours. Remove weight and remove paneer from cloth; discard any liquid.

This recipe can be easily doubled or tripled as needed.

The paneer can be stored, tightly wrapped, in the refrigerator for up to 3 days or in the freezer for up to 1 month.