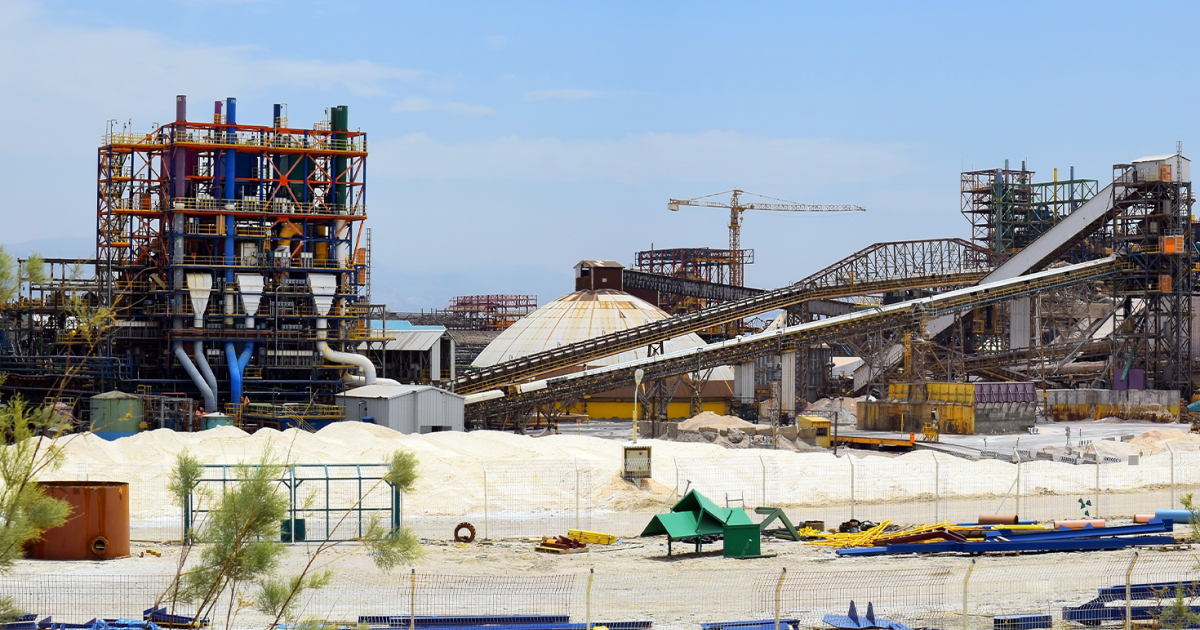 This article originally ran on Yale e360. Read it here.

In Minnesota, there’s a research farm peppered with wind turbines that, when in full swing, boasts an astonishingly low carbon footprint. The wind powers a chemical plant that makes ammonia, which can not only be spread as fertilizer under the turbines, but also fuels an experimental tractor, stores energy for a non-windy day and — soon — will heat the barns that dry their grains. All without producing CO2.

“For deep decarbonization of agriculture, you switch to green ammonia,” says Michael Reese, director of the University of Minnesota project. The university’s studies have shown that using green ammonia (“green” in the sense that it is made with renewable energy) for fertilizer, fuel and heat could drive down farming’s carbon footprint by as much as 90 percent for corn and small grain crops. “That’s transformative,” Reese says.

Advocates of this alternative, zero-carbon liquid fuel see green ammonia’s reach expanding far beyond farms. They predict a vast new market for green ammonia as a fuel, eventually outstripping the planet’s already enormous (and growing) demand for ammonia as fertilizer. A 2021 International Energy Agency report forecasts that to hit zero emissions by 2050, hydrogen-based fuels (including ammonia) should account for nearly 30 percent of transport fuels by 2050, up from basically zero today. That report predicts that cars will run on batteries and planes on biofuels, but ammonia will be vital for the shipping industry, responsible for 3 percent of global emissions and trying hard to whittle that down fast.

Several countries have plans to use green ammonia to store and export their renewable energy surpluses.

Ammonia is also one of the top contenders for storing and transporting energy from renewable power plants so that electricity is available when and where it’s needed. The idea is to use renewable power to produce green ammonia from non-fossil fuel sources, send it off by pipeline or ship and burn it in power production plants with turbines customized to run on ammonia. While batteries are efficient, they are best suited to storing smaller amounts of electricity for hours or days; a 2020 Oxford Institute of Energy Studies report concluded that for large-scale, long-term energy storage, liquid ammonia is hard to beat. Countries including Japan, Australia, the Netherlands, and the United Kingdom have national plans to use green ammonia to store (and export) their renewable energy surpluses.

All told, chemist Douglas Macfarlane at Monash University in Melbourne, Australia, anticipates that ammonia production will go up about a hundredfold in decades to come.

For now, though, ammonia production is anything but green. The world produces a vast 175 million tons of ammonia per year, mostly for use as fertilizer, employing an energy-intensive, century-old industrial process that produces a lot of greenhouse gas: The industry is responsible for about 1 to 2 percent of global carbon emissions, making it one of the dirtiest on the planet.

That will need to change if ammonia is to become part of the world’s climate change solution. To ensure all this ammonia is green, not dirty, is a huge task. Of course, the ammonia being made to store wind and solar power will be produced using that renewable energy. But to fill requirements for fuel and fertilizer will mean much more renewable energy on top of that. Ammonia plants will need to alter — or even reinvent — their production systems. And engines will need to be reconfigured to run on the new liquid fuel. Along the way, producers and users will have to overcome hurdles: Ammonia is toxic, and burning it can potentially produce an even more potent greenhouse gas than CO2.

Pure hydrogen (H2) was once touted as the fuel of the future. But hydrogen has issues: as a liquid it needs cryogenic temperatures of around minus-250 degrees C; as a gas it needs to be stored at high pressure; in air, it’s explosive. Ammonia (NH3), on the other hand, is easy to store as a liquid and still packs a punch, with about half the energy density of traditional fossil fuels. Although ammonia is toxic, the world already has a vast system for making, storing and transporting it. “It ticks all the boxes,” says Jimmy Faria, a chemical engineer at the University of Twente in the Netherlands who has mapped out ammonia’s advantages.

The traditional, cheap way of making ammonia is to strip hydrogen from natural gas using steam (producing CO2 as a by-product), then combine that hydrogen with nitrogen from the air at high pressure and temperatures of hundreds of degrees Celsius. This procedure, called the Haber-Bosch process after the Nobel Prize-winning chemists who invented it in the early 1900s, typically releases nearly 2 tons of CO2 into the atmosphere for every ton of usable ammonia.

A green ammonia plant in Louisiana is expected to produce 20,000 tons per year by 2023.

The simplest way to slash emissions from ammonia production is to take natural gas out of the equation and instead make hydrogen by splitting water with electricity sourced from renewables. The rest of the Haber-Bosch process remains the same, powered by renewable electricity. This is what the Minnesota plant, at the University’s West Central Research and Outreach Center in the town of Morris, was doing when it opened in 2013, and it’s what many other commercial endeavors are planning on now. “This is a very dynamic field; there’s news out every day,” says Macfarlane.

Since 2018, experimental wind-driven green ammonia plants have been running in Britain and Japan. In the United States, CF Industries — the world’s current largest producer of ammonia — plans to have a flagship green ammonia plant at Donaldsonville, Louisiana producing 20,000 tons per year by 2023. In Australia, Yara’s Pilbara ammonia plant aims to produce 3,500 tons of green ammonia annually by the end of 2022, scaling that up fiftyfold by 2030. The largest project on the books is planned for Saudi Arabia: A plant scheduled to open in 2025 aims to make 1.2 million tons of green ammonia per year. These plants are energy-hungry beasts that need dedicated wind or solar farms to power them, says Macfarlane.

Despite the flurry of activity, this is still just a tiny fraction of the current global production of 175 million tons of ammonia per year. It would take on the order of 10,000 million-ton plants to boost global production a hundredfold. There are risks with such expansion, says Faria, including accidental leakage of ammonia and even environmental pollution with highly concentrated salt — a byproduct of the desalination needed to make all the water for green hydrogen.

Such a scale-up is “achievable” using available technology, says Faria — but expensive. According to the Oxford report, ammonia made in the United States at a big plant using fossil fuels today is 73 percent cheaper than electrically produced ammonia. The cost depends a lot on the local price of electricity, Faria notes, and that market is changing fast.

The cost of wind and solar has dropped “drastically over the last seven years or so,” Faria says. Eventually, he says, green hydrogen will be as cheap or cheaper than the dirty stuff — the question is when. To get green ammonia going fast enough and big enough, government policies will likely be needed to help subsidize green hydrogen and encourage economies of scale, says chemical engineer Prodromos Daoutidis, who works with Reese at the University of Minnesota. Until then, there’s a danger that industries such as shipping that hope to use ammonia as fuel will end up using “dirty” ammonia for power, simply shifting emissions from one industry (shipping) to another (ammonia production).

Power companies are developing turbines that run on ammonia for electricity production.

Meanwhile, production technologies will also advance. Improving on Haber-Bosch isn’t easy — it’s an established and efficient technology, says Daoutidis. But there is wiggle room. Reese and his collaborators have secured $10 million from the U.S. Department of Energy to build a pilot plant testing two innovations: a new and improved catalyst, and an absorption salt for pulling the ammonia out at the end of the process. These factors, they hope, will reduce capital costs and the need for high pressures.

Macfarlane is betting on even more dramatic change. Instead of just swapping out the source of the hydrogen or fiddling with the details, he envisions an entirely new way of making ammonia. The idea is to produce ammonia directly in an electrochemical cell, without having to make hydrogen as an ingredient. This so-called “generation 3” technology has proven a hard chemistry nut to crack after many years of work. “This is still very challenging,” says Faria. Macfarlane has a startup company, Jupiter Ionics, aiming to do the trick with a cell that makes use of a similar electrolyte to that in a lithium battery.

Unlike Haber Bosch plants, such electrochemical systems would be small and easy to turn on and off; one the size of a shipping container could make a ton of green ammonia a day, says Macfarlane. That could prove a game changer for places such as remote African towns or, for example, the wind-rich Caribbean Curacao Island, says Faria, where it’s expensive or logistically hard to import fuel, and fertilizers are expensive. Local production could feed and fuel isolated farms and villages. But many chemists are more skeptical than Macfarlane that this can be achieved, economically, anytime soon. “In my mind these technologies are extremely promising but at an early stage,” says Daoutidis. “It’s a question mark.”

Once green ammonia has been made, systems also need to be in place to use it — to burn it in a combustion engine to power a ship or drive the turbines of a power plant.

This isn’t a new idea or even a new technology — ammonia-fuelled combustion engines have been around since the 1800s, and were briefly popular during World War II when oil shortages were a problem. But fossil fuels proved both cheaper and easier to work with.

Ammonia burns slower and is harder to ignite than fossil fuels; most ammonia engines need a dose of diesel or hydrogen to get them going. If engines leak unburned ammonia, that can be toxic. And ammonia engines tend to produce nitrogen oxide, also a potent greenhouse gas. Catalytic converters can solve this problem, though. “It’s within our reach,” says Faria of clean ammonia-powered engines. “We’re talking about polishing the rough edges of something that’s relatively mature.”

Major engine manufacturers, including German MAN Energy Solution and Swiss WinGD, are developing ammonia-fueled engines and kits to retrofit old engines so they can run on ammonia, with first products expected to be on ships in 2024. Meanwhile, startups are also getting in the game. In Minnesota, Reese’s colleague William Northrop launched Aza Power Systems a month ago to commercialize its own ammonia-powered engine technology.

Power production companies, too, are developing turbines that run on ammonia for electricity production. It might seem crazy to use electricity to make hydrogen, use that to make ammonia, move the ammonia and turn it back into electricity again — you only get about 20 to 30 percent of the electricity back at the end, notes Faria, compared to the 98 percent efficiency of a battery. But the benefits of easily storing and transporting that energy outweigh this problem, he says.

No matter which specific direction things go, observers expect the green ammonia market to ramp up quickly. While ammonia surely won’t be the best solution for everything, it has a role to play in getting to net zero, alongside biofuels and hydrogen, according to studies such as the IEA report. As carbon prices go up, green ammonia will become king, predicts Faria: “I think ammonia is probably the future for liquid fuels.”