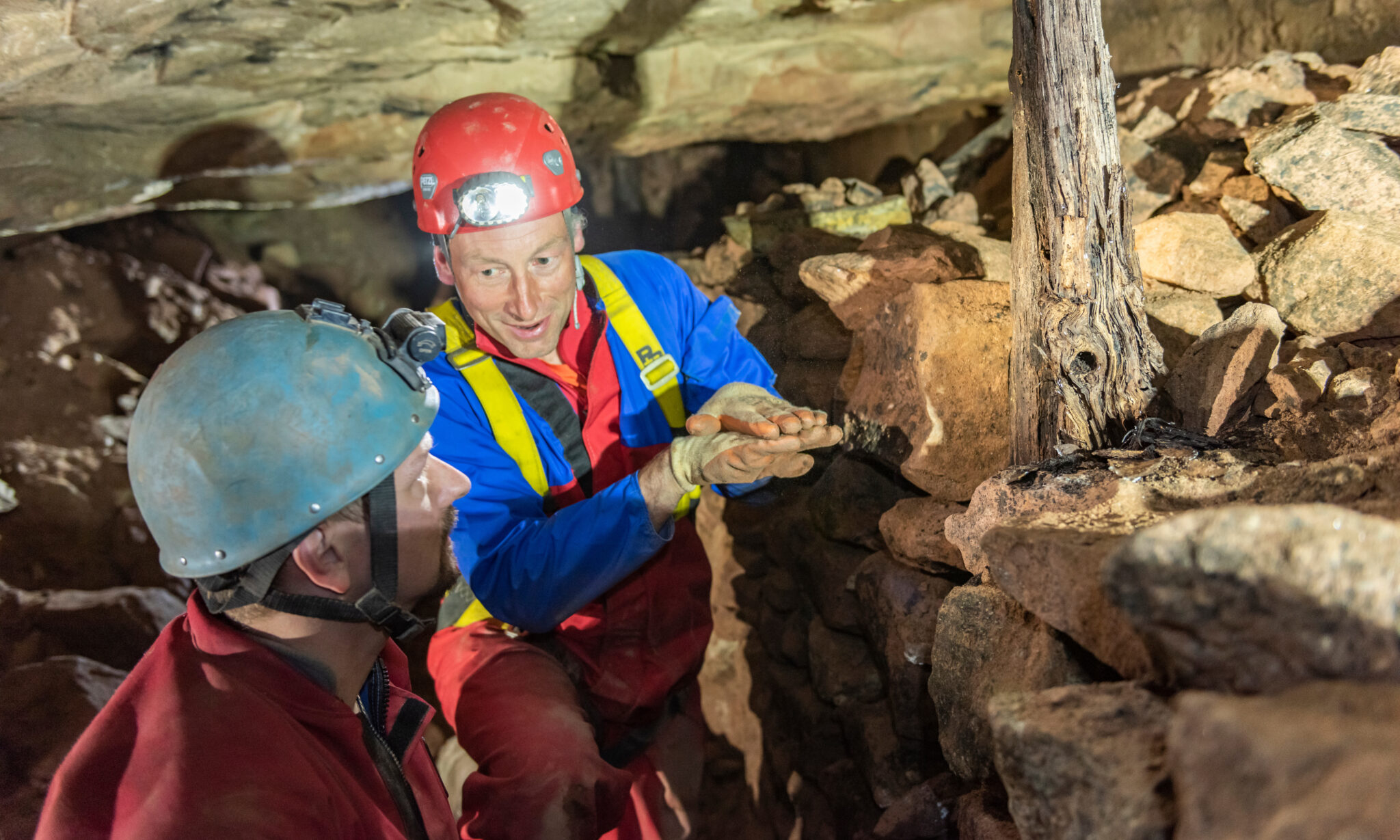 Cavers exploring the mining tunnels at Alderley Edge in Cheshire have discovered a cobalt mine preserved exactly as it was when it was abandoned in around 1810. Members of the Derbyshire Caving Club, who have a special lease from the National Trust to explore the  Alderley Edge mines, found the historic cobalt mine in a state of suspended animation, replete with the miners’ personal objects, mining gear and graffiti they’d left on the walls, last fall and has been exploring the labyrinthine tunnel network since then.

Leather shoes, clay pipes, a metal button from a jacket, along with inscriptions written in candle soot, and mine machinery, were among the objects that were found.

Also uncovered was a clay bowl that had been buried in a wall, a practice that may have been followed by superstitious miners as an offering of thanks for a good vein of mineral. Other discoveries include clearly defined fingerprints in clay used to hold candles, and the imprint of corduroy from a worker’s clothing where he leaned against a wall.

Among the larger abandoned items was a windlass, a piece of equipment used to shift large weights or quantities of raw materials. This is the first time such a piece has been uncovered at Alderley Edge. […]

Ed [Coghlan of the Derbyshire Caving Club] continued: “One of the objects which we had not unearthed in this area before, was the windlass. This was an important piece of mining equipment which we would have expected the workers to have taken with them for use at another mine. It does suggest they were told without much warning to collect their tools and move on, which is not surprising once the cobalt was exhausted, since each day there was a day paying wages.”

Cobalt mining had a very brief history at Alderley Edge. It began during the Napoleonic Wars when Continental sources of cobalt to make blue glass and pottery glaze dried up. Sir John Stanley, 7th Baronet of Alderley Hall, leased cobalt extraction rights to the Alderley Edge mines. The bottom dropped out of the English cobalt market after Napoleon’s final defeat in 1815, and the Alderley Edge cobalt mines were closed by 1817. The

discovery of this mine frozen in time sheds new light on the brief history of cobalt extraction in Alderley Edge’s 4,000-year history of being mined.

The objects in the mine have been photographed and documented in situ, but they have not been and will not be removed. They will remain in the environment that has conserved them for 210 years. The National Trust has  created a virtual 3D fly-through of the mine created with data from laser scanning, submarine ROV and photogrammetry technology. Explore it below: