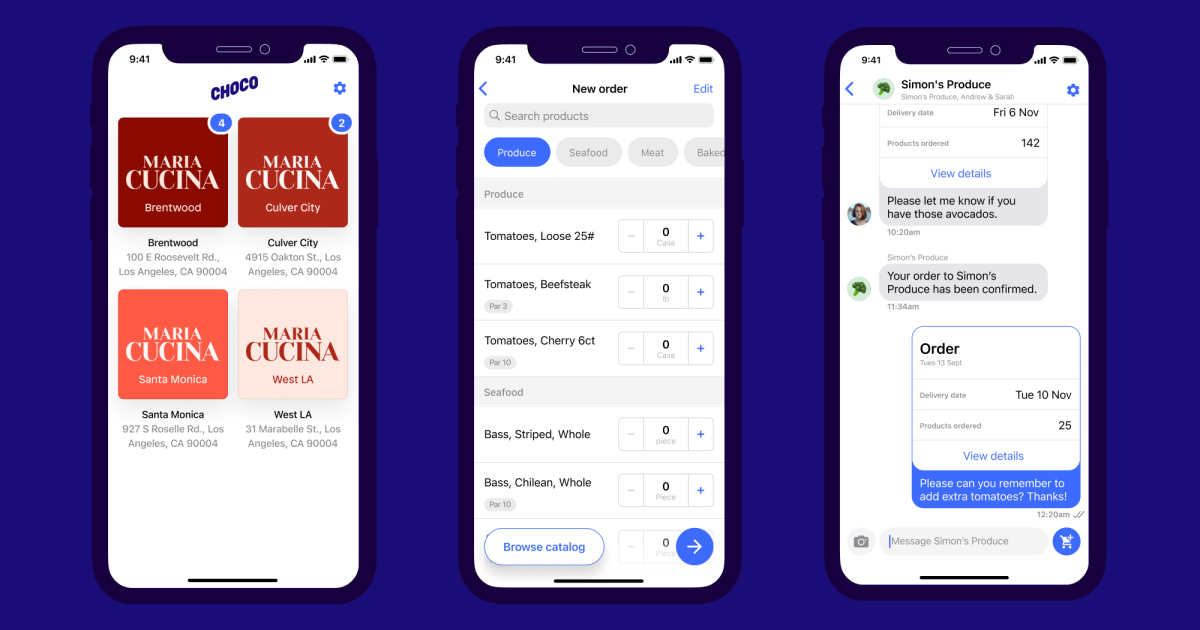 Startup Choco, on the heels of a substantial funding round, is proposing the digitization of the food system as one way to combat that waste. The Berlin-based company has created a platform that hones in on food waste in the hospitality industry, connecting food suppliers directly to restaurants and cafes.

As it stands, chefs in the industry typically source ingredients from various food distributors and are tasked with maintaining multiple contacts and manually keeping tabs on existing restaurant inventory. On both sides of the supply chain, this relationship and its lack of flexibility creates opportunity for food waste, with distributors struggling to sell produce at the end of their shelf life and restaurants over-ordering to ensure their menus are covered. Through its software, Choco hopes to expedite and optimize purchasing processes so less food gets tossed. It does this by boiling the previously multi-pronged process of ordering goods down to a simple chat message.

That mission has caught the attention and wallets of investors. In mid-April, Choco announced that it had raised $111 million in Series B2 funding, led by G Squared and Insight Partners, bringing its post-market valuation to $1.2 billion. Originally founded in 2019, this round of funding comes just six months after Choco raised $100 million in Series B.

Originally founded in 2019 by a cohort of “serial entrepreneurs,” the company has expanded to over six markets: United States; Germany; France; Spain; Austria; and Belgium. It has almost 450 employees. Co-founder and CEO Daniel Khachab said that despite successful funding rounds and the company’s growth over the past three years, the company’s guiding vision has not changed, “We founded Choco to address food waste,” he said. “The problem has not changed [with this new funding]. What this round of funding does allow us is the permission to [address the problem] in a larger way, and it gives us the ability to do it faster.”

Choco’s platform joins a cadre of other technology companies including China’s Pinduoduo and the UK’s Too Good To Go that are providing digital tools that reimagine how we see and consume food.

For Choco, the key to building a better food system lies in the data. Khachab argues that aggregating all players in the supply chain on one central data-collecting platform can help bridge information silos in the industry. “[With Choco] all of a sudden you have all these silos operating on one data layer,” Khachab said. “Now suppliers can use data-driven decision making and see trends in ordering and in food further in advance.”

Since its founding, Choco has weathered a global pandemic and supply chain disruptions that saw farmers destroying billions of pounds of potatoes while grocery store shelves remained empty. Restaurants, Choco’s target clientele, were also subject to erratic closures due to shifting public health guidelines and staff members susceptible to falling ill with COVID-19.

During the height of the pandemic, Choco leveraged its platform to help avoid further food waste by redistributing food from its partner suppliers, which typically provide food for restaurants, directly to consumers. “We delivered food to doorsteps across New York,” Khachab said. “Our platform wasn’t built for this, so it was a little clunky, but it showed how we could redirect food from the hospitality stream to the retail stream.”

For Khachab, Choco’s success lies in its ability to scale, arguing that the company’s growth allows for them to better tackle the problem of food waste. “The reason why Choco is a company is because companies tend to scale the largest. Unfortunately, no NGO has made the scale of Amazon. What if we could build a company in which every unit of success directly translates to a unit of success for society and for the planet in direct proportion?”

Choco’s platform joins a cadre of other technology companies including China’s Pinduoduo and the U.K.’s Too Good To Go that are providing digital tools that reimagine how we see and consume food. Currently, the future of the global food supply chain remains in flux. Scientists worldwide are warning that extreme weather and drought due to climate change will make an outsized impact on agriculture and food production, affecting global food security. Meanwhile, the ongoing war between Russia and Ukraine has created fertilizer and grain shortages that are projected to incite a global food crisis.

Amidst this uncertainty, it is clear that creating a more resilient food system is necessary to address not only food waste and agriculture’s impact on the environment but also to ensure the world’s growing population does not go hungry. Technology that facilitates better communication between different strata of the supply chain can help with resiliency by increasing transparency and helping food move more efficiently. However, technology alone will not be able to create the fundamental shift necessary in order to prepare for a food insecure future. It must move in tandem with a reexamination of our global consumption habits as well as our current agricultural practices.