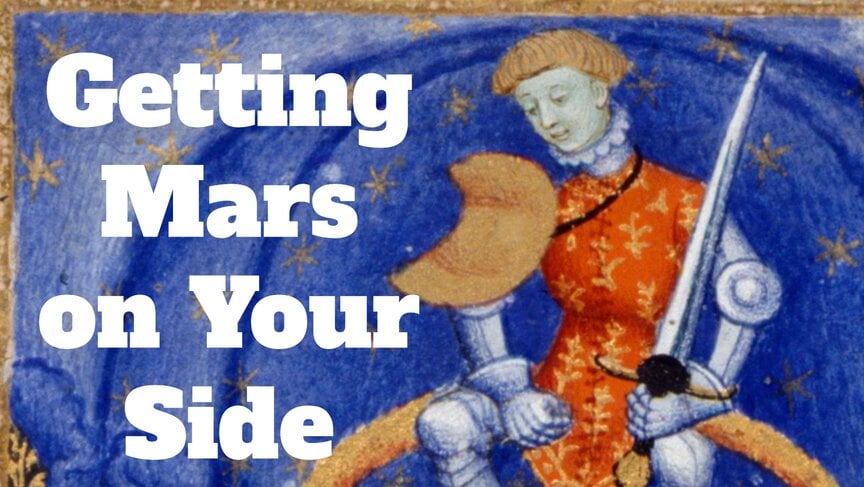 For many in the Middle Ages, the planets of the solar system held special powers, and could even bring victory in warfare. The key to this power was told in the Picatrix.

The Picatrix is a manual for using magic, often focusing on astral magic, or the powers of astrology. The dominant medieval theory of the cosmos was that the planets and stars not only revolved around the Earth, but had special ways they could influence humankind. The planets, which included the Sun and the Moon as well as Mercury, Venus, Mars, Jupiter, and Saturn, were especially powerful in this regard. In many ways, these ideas are throwbacks to the beliefs of ancient societies that saw the planets as gods.

The Picatrix was introduced to Europe between the years 1256 and 1258, when the Castilian king Alfonso X ordered a Latin translation be made. Further research has revealed that it is based on an Arabic text called Ghāyat al-Ḥakīm (The Goal of the Sage), which itself was composed in the mid-tenth century. It proved to be very popular, and by the end of the fifteenth century you could find copies of it at libraries in London, Paris, Florence, Prague, and Krakow. Other scholars quoted from it extensively. One could also find those who condemned its writings: “it is a very pointless book,” said one detractor, “full of superstitions, and structured like a ladder toward idolatry.”

While the pages of the Picatrix include philosophy and scientific ideas about the cosmos, the book is very much a practical guide, focusing on the creation of talismans and objects that could benefit its user in some way. These could be for regular day-to-day tasks, such as improving your fishing or repelling insects, but there were others that could be used for much more malevolent purposes, such as the destruction of cities. Creating these items involved gathering and preparing many ingredients – for example, to attract the “spirits of enmity and malevolence”, you would need to mix parts of a black cat’s gallbladder, a pig’s brain, dog fat, and two grains of myrrh, and then eat it.

When it comes to warfare you can find a handful of entries in the Picatrix dedicated to it. These are often associated with the planet Mars, with the text specifically stating that one should “entreat Mars for conquering of enemies, emboldening of hearts, tracking and hunting harmful animals, setting fires, war planning, and conquest over enemies”.

This could be done in several ways, including fashioning a ring. You could make one on a Tuesday, and it would need to depict a man wearing a breastplate and carrying a sword in his right hand and a decapitated head in his left. Those who wear the ring “will subdue in battle and triumph over enemies”.

Other items could have some military-related purposes. One could create a stone called Handemotuz, which could remove the desire for sex. The Picatrix notes that this was particularly useful for men about to go into battle, for having sex would supposedly make them weaker. The book also contains another spell to make an enemy army more promiscuous.

It is not surprising that medieval rulers like Alfonso X would want a copy of the Picatrix. When it came to matters of war, every advantage must be considered.

When you wish to pray to Mars

The Picatrix even offers ways to pray to each of the planets, so that one could gain their favour. The act of praying to Mars is quite elaborate – the person must first pick a favourable time and go to a remote place. He must be wearing all red clothing, have a sword around his neck and a bronze ring on his finger, and be carrying as many weapons as possible. Then he must set a fire in a bronze censer and throw into it specially made pills. The text describes these pills as made of “equal parts of wormwood, aloe, squinancywort, spurge, large pepper, and watercress” – with some human blood added in as well. Once this is done and the smoke is rising from the censer, he can then stand up and speak this prayer:

O Mars, you who are honoured lord, hot and dry, capable, weighty, robust at heart, the spiller of blood and giver of infirmity itself! You are strong, powerful, sharp, daring, shining, agile, and the lord of battle, punishment, misery, wounds, prison, sorrow, and mixed and discrete things. You who have neither fear nor concern for anything! You are sole helper in investigating your effects, strong in judgments and wilful acts towards conquering and making petitioners fortunate, an actor of lawsuits and battles, a performer of evils on the weak and the strong, a lover of the children of battles, an avenger of wicked and harmful people in the world. I conjure and ask you by your names and qualities present in the heavens, and by your requests to the Lord God who placed in you power and strength, gathering them for you and separating them from other planets so that you might have strength and power, victory above all, and great vigour.

You can now read the English translation of this text, by Dan Attrell and David Porreca in Picatrix: A Medieval Treatise on Astral Magic, published by Penn State University Press. Click here to learn more about it or buy this book from Amazon.com

See also: How to become an EVIL wizard – medieval magic from Picatrix