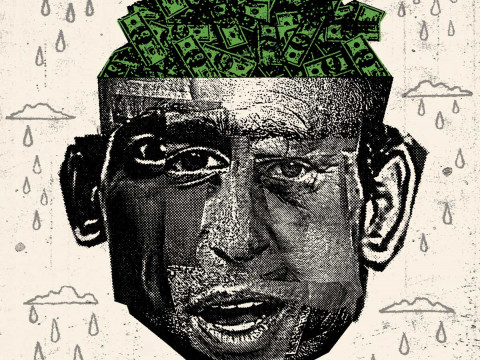 Few contemporary philanthropists would consider giving money to ease the national debt. But in 1928, Winston Churchill – then the Chancellor of the Exchequer – announced an anonymous charitable gift of £500,000 to a new fund, set up to pay off the UK’s substantial national account. It was good news for Churchill. After the First World War, the high national debt was a hot political issue.

In 2021, Gaspard Farrer, a former partner of Barings Bank, was revealed by a court as the anonymous donor. He had mixed philanthropy with loyalty to his old business. Hoping that ‘the ocular demonstration of a growing fund’ might lead other wealthy people to contribute, Farrer also intended that Barings would take brokerage commissions.

It is no spoiler to say that his plan did not succeed. But nor did it entirely fail. In 1935 the fund was topped up by Baron Dalziel of Kirkcaldy, a Scottish newspaper proprietor. Dalziel left an ample £400,000 to the fund in his will. Then, over the decades, the scheme was slowly forgotten. But, managed by caretaker trustees, the capital still increased in value, coming to be worth £600 million.

The national debt is again a topical debate. Although Farrer’s fund has been forgotten by the public, the same is not true for the government. This year, the Attorney General won a court case so as to have the £600 million paid to the British government. The judge – Mr Justice Zacaroli – said that even a small contribution to the national debt carried through the spirit of Farrer’s failed plan.

But it is not at all obvious what Farrer would have wanted to happen. Mentioned occasionally in unread tomes on early 20th-century banking,  Farrer is the definition of a footnote in history. He died shortly after the Second World War, aged 85. On his death, he made a very large donation to Eton College. He was a bachelor, living with his two bachelor brothers. His father had collected Italian art and Gaspard left a bequest of Renaissance paintings to the Ashmolean at Oxford.

Historical context provides a better clue as to his motivation. The national debt was in the news when Farrer decided upon his scheme. In 1927, a year before Churchill announced the fund to the press, the Colwyn Report on National Debt and Taxation had called for a doubling of debt payments. The minority report called for payments to be trebled. One academic contributor solemnly recommended that they should be increased by a factor of six.

Churchill had little intention of dramatically increasing debt payments. There were far more pressing calls on the budget. The franchise had been expanded to include all women and the prime minister, Stanley Baldwin, had introduced a widows’ pension. In his last budget before losing power, in an attempt to win electoral favour, Churchill repealed duties on tea.

Farrer, a successful banker, was not naive. There is no reason to think that he lacked political nous. His gift was extremely helpful for the Conservative Party. It gave Churchill a good news story on the national debt close to election time. But, as well as wanting to help Churchill directly, Farrer had a more subtle aim in view.

To better understand his motivation, Farrer should be compared with Stanley Baldwin. The prime minister had also made a gift to the national debt. In 1919, four days before the Treaty of Versailles was signed, Baldwin announced his plan in a letter to The Times. He would purchase £150,000 of War Loans, only to write them off. The gift was supposedly anonymous. But taking a flexible view of anonymity, he signed his letter ‘F.S.T.’. He was Financial Secretary to the Treasury at the time. It was not long before the initials gave the game away.

Baldwin was ambitious; it is not possible to become prime minister by accident. After he obtained a third-class degree in history at Cambridge, he had gone into the family business – an iron and steel firm. Baldwins Ltd had been lucrative during the war, but after the fighting was over there was intense popular resentment about profiteering. The political advantage gained through his gift is obvious. It hushed the critics of his war business.

Farrer had also profited from the war, at least indirectly. Barings had managed transactions for the Russian imperial government. These included purchases of munitions, boots, barbed wire and motor vehicles. The postwar period had also been good for the bank, as Barings funnelled funds to countries in the former Austro-Hungarian Empire. But, unlike Baldwin, Farrer gained no personal advantage from his gift.

While Baldwin’s gift helped himself, Farrer’s philanthropy aided his class. Since the armistice, there had been calls for a graded levy on capital. The Labour Party had fought the 1924 election on that platform. The levy would have made the rich pay a percentage of their wealth.

Although it seems radical now, the capital levy was not far-fetched in the class-focused politics of the 1920s. Farrer’s gift should be seen in that context. Through his fund, Farrer drew out a little of the decade’s political heat. He levied himself voluntarily in the period between the General Strike and the Wall Street Crash. He also provided a very public scheme for other wealthy people to do the same.

Farrer’s scheme contained a political message. The rich would voluntarily pay for the war debt; there was no need to raise capital. Still, there is no reason to think that Farrer was cynical or that his scheme was made in bad faith. He had sufficient belief in his fund to make an extremely large personal contribution. A mix of class interest and generosity is a hallmark of elite charity. It is also common for philanthropists to be optimists.

This political psychology was not discussed in court. Mr Justice Zacaroli said that paying the money to Rishi Sunak’s Treasury carried out Farrer’s plans as nearly as possible. But seen through the lens of history, it is clear that Farrer’s wishes were not directly relevant to the present day. Farrer was interested in the tax politics of the late 1920s, not those
of 2022.

It is a disappointing end to the tale. The judge did not have to close the fund. Thanks to an influential 1948 policy report by Lord Beveridge, the case could have been decided differently. The Beveridge report still makes for entertaining reading. Sceptical of elite philanthropy, he included a ‘Chamber of Horrors’ – a list of useless trusts. In one remarkable instance, a donor had attempted to create a trust for the ringing of mournful bells on the date of his wedding. Happy bells were to ring out on the date of his death.

Beveridge missed one of the worst horrors. In the early 1900s a landowner in Oban had sought to erect statues in his own image. He apparently planned that they would increase in number throughout all time. He also declared that statues should be placed on top of a colossal circular tower. Although the colossus was built, and still dominates Oban, the statues were stopped after his death. A judge described the donor’s plan as amounting almost to a ‘moral disease’.

Donors sometimes make terrible plans. In his report, Beveridge’s point was that judges should not strain to carry through the schemes of historic donors. By 1960 it had led to a change in the law. Because of this, modern judges can put aside the donor’s plans if they wish. Farrer’s plan was not vain nor grotesque, but it had become useless over time. Within the post-Beveridge legal framework, Mr Justice Zacaroli did not have to give the fund to the British government.

There was a valid alternative on the legal table. The caretaker trustees suggested that the fund might be made into a permanent charity for the benefit of the nation. By contrast, payment to the Exchequer has caused it to vanish. Sadly, a fund for social purposes has been swallowed up. The government could easily raise £600m in other ways. There was no need for a grab on charitable capital.

Not everyone feels as comfortable as Beveridge in setting aside the plans of donors. But a permanent foundation might be justified by reference to Farrer’s own wishes. Charities can last forever, and so serve as a perpetual memorial through history. In common with academics, many philanthropists work with an eye on posterity. The Henry Smith Charity was established in 1628. The Thomas Coram Foundation for Children was established in 1739.

Owing to his enormous donation to the school, there is already an Eton boarding house named after Farrer. Alongside Stanley Baldwin, it is likely that Farrer took a flexible view of anonymity. If the fund had become as enormous as planned, Barings could not have kept his role a secret. Farrer must have known that there would be an intense scrutiny of his scheme. It would have all come out, albeit after his death.

Farrer is only a footnote in history because his plan failed. Ironically, a permanent charity – the Gaspard Farrer Foundation – perpetuating his name into the future, might have fulfilled one of his ambitions. But even if Farrer was not concerned with historical legacy, there is still little justification for wasting his fund. Some things have not changed since the 1920s. Tax is still at the centre of politics. And, if the government needs money for debt payments, it should look to private taxation first.

John Picton is Senior Lecturer in Law at the University of Liverpool.