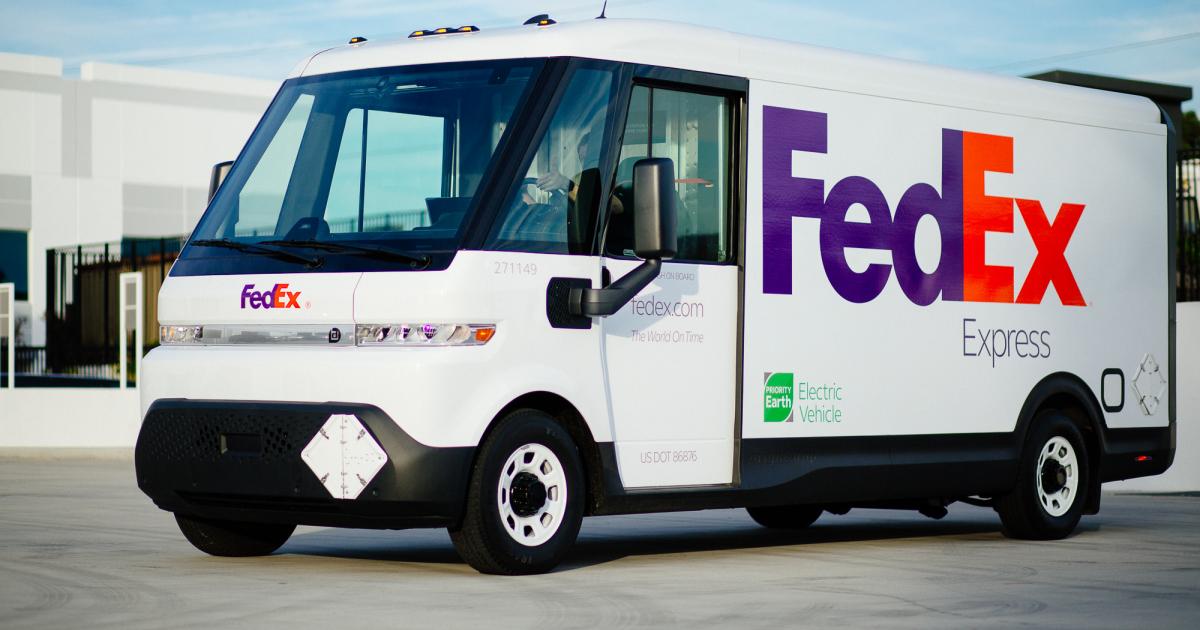 Industry leaders and household names continue to pile into the electrification movement.

Electric vehicle and last-mile delivery company BrightDrop, a subsidiary of General Motors, kicked off 2022 with splashy new deals with Walmart and FedEx.

On its way to building a zero-emissions fleet, mega-cap company Walmart inked an agreement for 5,000 BrightDrop electric vans — both the larger EV600 and smaller EV410 models — to be added to its InHome delivery service.

FedEx, BrightDrop’s first customer, previously had a deal in place to buy 500 electric delivery vehicles. Now, the delivery giant is reserving an additional 2,000 vans to add to its fleet.

“The demand [for BrightDrop] is massive,” BrightDrop Chief Financial Officer Steve Hornyak told GreenBiz. “The demand is here already, and as we ramp up testing in 2023, you’re going to see a sharp increase in 2024; it’ll be almost straight up.”

According to FedEx regional president of the Americas, Richard Smith, the new deal could potentially expand to 20,000 vehicles over the next several years. During a press meeting in early January ahead of the announcement, Smith echoed Hornyak’s excitement.

“BrightDrop’s real, they’re here now,” Smith said. “Their trucks are on the road in California for us delivering packages. They have a vehicle that works as advertised, and we love it. We want to buy a lot more of them.”

“Our vehicles can save fleet owners nearly $7,000 per year compared to traditional diesel vehicles,” Hornyak said. “The cost to charge a plug-in electric vehicle is less, maintenance costs are less, and our vehicles provide efficient use of energy with regenerative braking, which allows for less money spent per trip.”

“We’ve got a number of other things gearing up as part of our unannounced road map — a heck of a lot more than just vehicles,” said Hornyak.

In the press meeting, BrightDrop CEO and president Travis Katz explained how the company aims to resolve an array of challenges, including pollution, growing demand for delivered goods, labor shortages and traffic congestion.

“With our electric vans, we can help significantly reduce vehicle emissions of last-mile delivery, which is really the hidden footprint of e-commerce,” Katz said. BrightDrop’s vehicles are powered by the Ultium battery platform, which allows for an estimated range of 250 miles per full charge. “With our software, we can dramatically reduce congestion and make streets safer for drivers and pedestrians.”

Just last month, BrightDrop delivered its first five electric light commercial vehicles to FedEx — which are already on the road making deliveries. FedEx has plans in place to build out a more robust charging infrastructure and electric grid.

Doubling down on EVs is not out of character for FedEx. In 2003, the logistics leader was the first delivery company to use hybrid vehicles; in 1994, it used an early-stage acid-battery powered vehicle. According to FedEx, pilot results from initial BrightDrop testing allowed the company to increase package deliveries by 15 percent per hour and cut delivery vehicle curbside dwell time (or the minutes spent at facilities waiting to pick up or drop off items) in half — all while reducing physical strain on couriers.

“It is part of the normal vehicle life cycle to retire vehicles and bring on new ones, and as FedEx brings on new ones, we’re really leaning into EVs,” Smith said. FedEx, according to Smith, aims to have 50 percent of all new vehicle purchases be electric by 2025; the goal is for 100 percent of purchases to be EVs by 2030.

The increase in high-profile EV reservations comes amid an industry-wide blitz for electrification. Electric delivery vans add to the growing mix of commercial vehicles (from the likes of Ford, Tesla and Rivian), electric supply yard trucks and the development of a broader electric transportation infrastructure.

“BrightDrop’s vehicle has got upwards of two to three times the range of some competitors out there, and you don’t have to charge it everyday,” Hornyak said. “So that would allow someone like FedEx or Walmart to have three times the number of EVs on the road with the same amount of infrastructure versus a lower mileage vehicle.”

Compared to competitors, Hornyak emphasized that the efficiency and production of the relatively young company — as well as the financial and engineering capability of General Motors — will make BrightDrop a leader in the delivery and EV space.

“Some [EV] companies out there are missing deadlines, but we’re already getting ahead of deliveries and execution for our customers,” Hornyak said. “There’s a lot of chatter out there, but BrightDrop is really accelerating on execution. And having two of the largest companies on the planet committed to rolling out its entire platform [with BrightDrop] is really a statement of support for the company.”