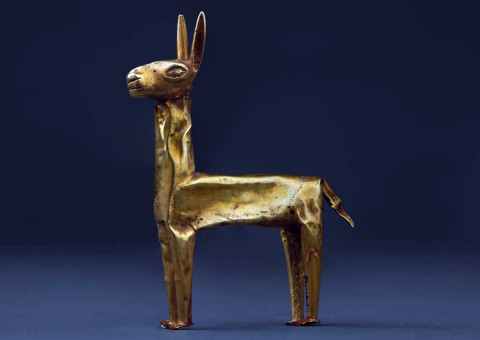 The Inca Empire emerged out of Peru’s Andean highlands in the 13th century and, at its greatest extent, stretched for about 3,500 miles down the western flank of South America. It was then the largest empire in the world, ruling a population of around 11 million. The Inca emperor was known as the Sapa Inca, the living embodiment of Inti, the sun god. All gold – revered as the sweat of the sun – belonged to the emperor.

The llama was fundamental to the cultures of Peru and the Inca. Llamas were valued as pack animals and for their meat, fertilising manure, wool and their ability to withstand intensely cold climates and high altitude. The wealth of Inca communities was measured in the size and health of their llama herds.

This tiny gold llama is made of hammered gold sheet, its apparent smile belying the real llama’s notoriously bad temper. Such figurines were used in official ceremonies, such as ritual sacrifices, victims of which included guinea pigs, llamas and even the children of the elite. This gold llama is a very rare survivor; the vast majority of Andean gold (and silver) was taken by the Spanish in the 16th century and melted into bullion.

The llama also featured in pre-Inca mythology, in the oral tradition of the Huarochirí in Peru’s mountainous north-east. A llama dreams of an approaching flood and warns its owner and their family. They take heed and, with the llama, ascend Willka Qutu, the region’s highest mountain, where they find many other animals gathered. Soon, the waters rise, leaving only Willka Qutu’s summit unsubmerged. When they descend, they alone must repopulate the empty world.