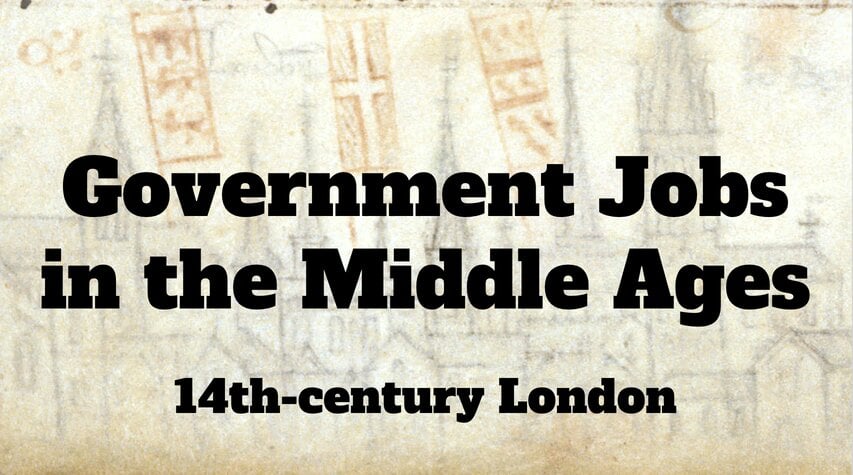 What were the kinds of jobs that medieval people did in a city government? A book from 14th-century London offers details about the positions and roles of civic officials in that city, ranging from the Mayor to Scavengers.

Known as the Jubilee Book, it has been recently edited and translated by Caroline M. Barron and Laura Wright. It was written in the summer of 1376, as part of an attempt to reform the city government. However, these reforms proved to be too controversial, and the Jubliee Book would be repudiated and publicly burned by London authorities in 1387.

However, in most cases, the roles and responsibilities of these civic officials did not change very much after 1387, so the Jubilee Book remains a very interesting source about how a medieval city was governed.

London’s mayoral election would occur every year on October 13th. Two candidates were to be picked by the city’s Common Council, which was made up of leading members from the many guilds operated in London, and then the city’s aldermen would pick one of these men. The records of London show that some mayors served multiple times, even being re-elected, consecutively. For example. Nicholas Brembre served as mayor in the years 1377, 1383, 1384 and 1385.

One of the key roles of the Mayor of London was to act as the city’s representative in dealings with the royal government. It was fairly common for disputes to arise between the King and the city over matters of jurisdiction or taxation, and in the oath of the mayor it was noted they were responsible for making sure that whatever rights the king had in London would be adhered to, while to make sure the king did not do so in matters where their rights had been relinquished.

The Mayor of London also had to convene a general meeting each year, attended by the sheriffs and aldermen, along with many of the other civic officials. This would take place on the first Monday after January 6th (which was the Feast of Ephiphany). In practice, the mayor and aldermen would hold court many times each year, when important matters and cases within the city would be deliberated upon.

All mayors had their own staff, and they would operate as part of the Mayor’s Court. This included a Chamberlain, Common Sergeant at Law, and Common Clerk. There would also be one esquire and two sergeants who were the personal bodyguard for the mayor. They would be paid 40 shillings a year. The esquire would also carry the mayor’s sword before him.

Every year London would elect two sheriffs in the same way mayors were elected. This would take place on September 21st. Many sheriffs would later go on to serve as the city’s mayor. A major part of their job would be to arrest and imprison people when ordered to by the mayor or alderman. They were also responsible for the maintenance of Newgate gaol, London’s largest prison, also with its prisoners. The Jubliee Book notes that each sheriff could be assisted by as many as four sergeants, although this number could be increased “to carry out tasks for the people’s needs.”

The Sheriffs of London would also hold their own court, dealing with cases of debt and minor trespasses. We only have one surviving copy of records from a London sheriff’s court, involving one sheriff and cases between July 1st to September 25th in the year 1320. In that period there were 550 cases. This suggests that the two sheriffs would have handled about 4000 cases in that year alone – and this was just one of a few different courts where Londoners could pursue actions. As Barbara Hanawalt notes, “reading these records leaves one with the impression that the mayor and aldermen were busy listening to citizens’ complaints from morning to night.”

This would be London’s town crier, who would go around the city announcing proclamations. According to the Jubliee Book, he would be paid 60 shillings each year, and could also earn more money by doing extra proclamations for some fo the city’s officials. For example he would be paid 12 pence for each every proclamation made in the city for the sheriffs – in addition, “so that he may do this the sheriffs should provide him with a decent horse for the honour of the city.”

In 1376 the city of London was divided into 24 wards, and each of them would have an Alderman. Their most important role was to hold a Wardmote at least twice a year (ideally four times a year), where matters within the ward could be discussed. This included a wide range of problems, such as whether fences were set up properly, the opening and closing times of taverns, or if criminals were hiding in the area. It would be at the wardmote that other civic officials would be chosen, including “constables, scavengers, ale-conners, a beadle and a raker” – this last person was responsible for sweeping and cleaning the streets, while the ale-conner made sure that bread, ale and beer were of good quality.

These would be the medieval London version of a police investigator. There would be at least one for every ward of London, According to their oath, they were to make sure that all kinds of evildoers were to be removed from their wards. The list included “any robbers or thieves, or evil gangs or bands, hucksters (sellers) of ale, or women who keep brothels, or other women who are antisocial and common slanderers of bad reputation.” He would need to report these people to the ward’s alderman, who would then would make sure they were expelled from the area within 15 days.

They also needed to search for people selling food illegally – meaning done secretly and not out in the open – and report them to the mayor and sheriffs. Another important duty for the beadle was to watch out for fights breaking out, especially those involving weapons, and report this to the sheriffs or other important city officials.

These officials were more like the beat cops of medieval London. According to their oath, they would “arrest all those who make dissension, riots, quarrels or affrays, so breaking the king’s peace, and take him to the house or counter of one of the sheriffs. And if you meet resistance from any such wrongdoer, you shall raise the hue and cry, and pursue them from street to street, and from ward to ward, until they are arrested.” Other duties for constables included carrying out searches for people that lived outside of a ward when asked for by scavengers or beadles.

These people had two important roles. The first was to make sure that the streets of London were in good repair and cleared of “rubbish, dung and all manner of filth.” Garbage and waste would certainly be a problem, and often the streets and alleys in London were very narrow, so having someone enforce laws and make sure refuse was removed was quite necessary.

The second role of scavengers was to prevent fire hazards in the city. On several occasions, major fires broke out in medieval London, as flames could easily spread from building to building. Therefore, the scavengers would go about inspecting “that all chimneys, furnaces, ovens and hearths are of stone and build sufficiently strongly against the perils of fire.”

There would be other civic jobs in London, often minor ones that were part-time at best, such as being in charge of places such as London Bridge or the Conduits that brought fresh water to the city. There also seems to have been many clerks that were needed to record the proceedings from various courts around London, or help prepare letters and charters. The Jubilee Book sometimes includes oaths for these people, making them promise not to reveal the secrets of the city.

The Jubilee Book was also concerned that the men who served in these positions would not try to exploit their power for personal gain. For example, as part of the aldermen’s oath, it says “you shall take no gift, great or small, if you believe in your conscience, that it has been sent to you to maintain some cause, or to damage or delay someone’s right, rather for love and friendship.”

While this particular document, an attempt at creating a kind of constitution for the city, only lasted for 11 years, medieval London had a wide array of civic officials who had jobs related to governing and protecting the city. Judging from the many records that have survived from the period, the people of medieval London interacted with their city government quite a lot.

The London Jubliee Book, 1376-1387: An edition of Trinity College Cambridge MS O.3.11, folios 133-157, by Caroline M. Barron and Laura Wright, is published as part of the London Record Society series. Please visit the publisher, Boydell and Brewer, for more information. You can also buy this book on Amazon.com