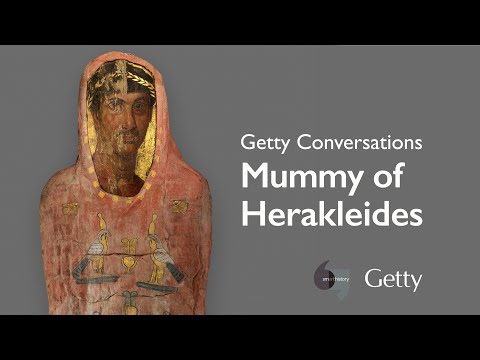 It’s been a molasses-slow weekend as far as bloggable news goes, so a video from the Getty it is. The video is less than 10 minutes long, but it manages to cover the interesting subject of how the beautifully painted cartonnage mummy of one Herakleides exemplifies the melding of Greek, ancient Egyptian and Roman cultures in post-Ptolemaic Egypt.

The mummy dates to the Roman period — ca. 120-140 A.D. — and is complete with intact linen wrapping and a fine wood portrait panel depicting a beardless young man with curly hair wearing a gilt laurel wreath. The linen shroud was painted red, symbolic of eternal life, and then decorated down the length of the body with the iconography of Egyptian deities including Osiris, Horus and Isis. The bottom of the shroud is painted with a representation of the youth’s feet with gilded toes, incorporating the pharaonic funerary tradition of golden toe caps. Above the feet is a Greek language inscription: ΗΡΑΚΛΕΙΔΗC ΘΕΡΜΟΥ, meaning Herakleides, son of Thermos.

The portrait panel, painted in realistic Greco-Roman style, was a Roman-era addition to the traditional Egyptian mummification practices that had continued, albeit in altered form, under the rule of the Ptolemies. A CT scan of the mummy confirmed that Herakleides was 18-20 years old when he died, so the portrait is at least accurate to his real age.

The CT scan also found a surprise inside: a mummified ibis placed on his abdomen just under the ibis painted on the shroud. Mummified animals were not usually incorporated into the mummies of humans. Ibises were sacred to Toth, so it’s possible Herakleides had a particular connection to the god, perhaps as a priest.

Anyway, awesome video follows. If you like that, have a browse through the Getty’s YouTube channel because this is one in a series of six collaborations between the museum and Smarthistory that highlights select pieces in the collection. The Victorious Youth, an exceptional Greek bronze that has been the subject of a 15-year legal struggle between the museum and Italy over the highly dubious legality of its sale and export, is one of the other subjects.