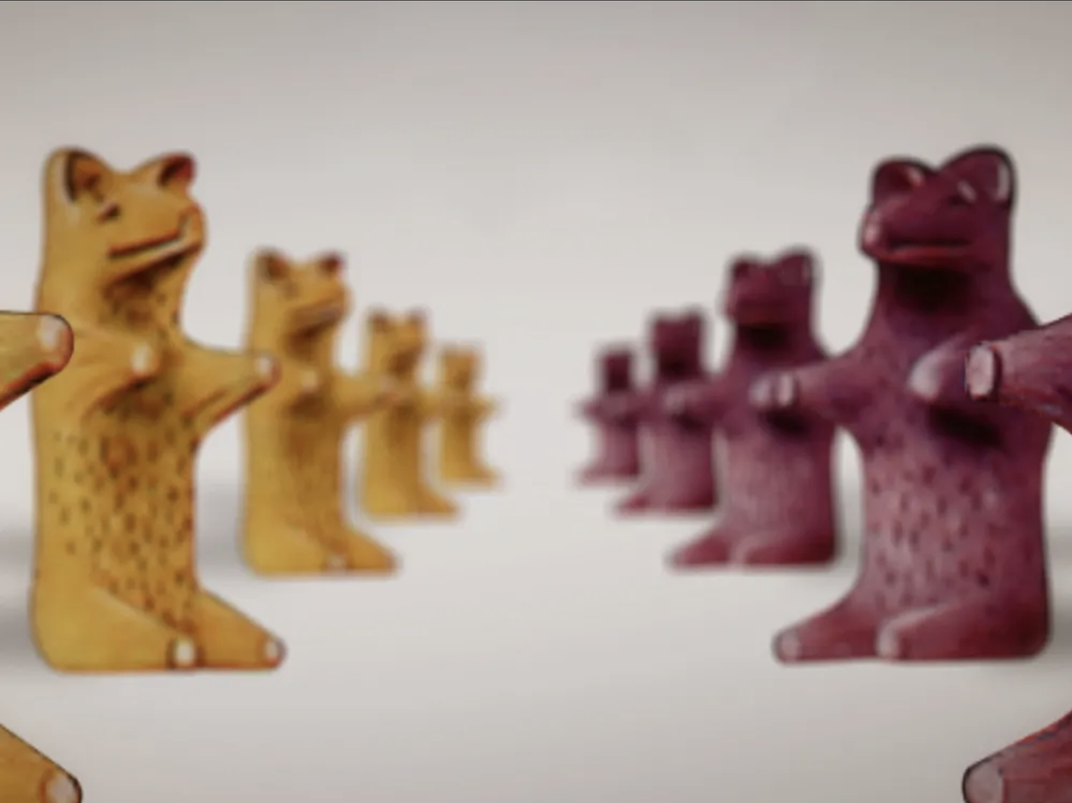 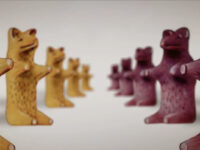 Confectioner Hans Riegel founded Haribo (combining the first letters of his name and hometown of Bonn) in 1920. The first production plant was a copper kettle in his kitchen and his first employee was his wife Gertrud. He’d make hard candies and she’d deliver them on her bicycle. In 1922, Riegel invented a new confection: the Tanzbären, or Dancing Bear. It was a soft fruit-flavored candy shaped like a bear sitting on its hind legs, inspired by the sad performing bears that were so popular at the time.

At 1.5 inches tall, the original gummi bears were bigger than the familiar form they take today, and they were tougher to the bite because they were made of gum arabic instead of gelatine. While jelly-style candies — gumdrops, Turkish delight — had been around a long time, Riegel’s innovation produced a chewier, firmer texture and the playful animal shapes appealed to kids raised on teddy bears which had exploded onto the global scene as the toy to have in 1903 after Teddy Roosevelt refused to kill a bear in an unsporting matter and a toymaker made a velvet plushie bear in his honor. The German toy company Steiff started making teddy bears at the same time, independently of the US trend, and they were instantly popular. When the little bears came out in candy form for just 1 Pfennig apiece, they were instantly popular too.

They soon outgrew their kitchen and moved operations to a production factory. The original Tanzbären shape was retired in the 1930s in favor of the Teddy-Bären which were smaller and cuter. Naturally they sold like crazy and by the beginning of World War II, Riegel had gone from selling tall bears in market kiosks to running a confectionary factory with more than 400 employees cranking out ten tons of candy each day.

The company managed to hang on by the skin of its teeth through the war years, but just barely. Hans died in 1945 at the young age of 52 and Hans’ sons had fought for Germany and been taken prisoner by the Allied forces. Gertrud ran the skeleton operation until her sons returned in 1946 to pick up where they left off. By 1950, there were 1,000 employees. Hans Jr. was the one who came up with the “Kids and grown-ups love it so, the happy world of Haribo!” slogan, still very much in use in commercials today. 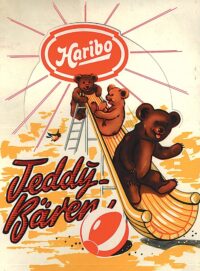 Hans Jr. and his brother Paul kept tweaking the product, continuing over the decades to introduce ever smaller and cuter bears. They were squishier too, their appealing softness a lure for unsuspecting children. The Goldbären gummi bear as it lives and breathes today was first sold in 1975.

Haribo is celebrating the centenary with a bunch of limited edition flavors (meh) and party hat-shaped gummies (double meh). I think they need to bring back the legacy recipe, al dente gum arabic and all. Team Tanzbären!