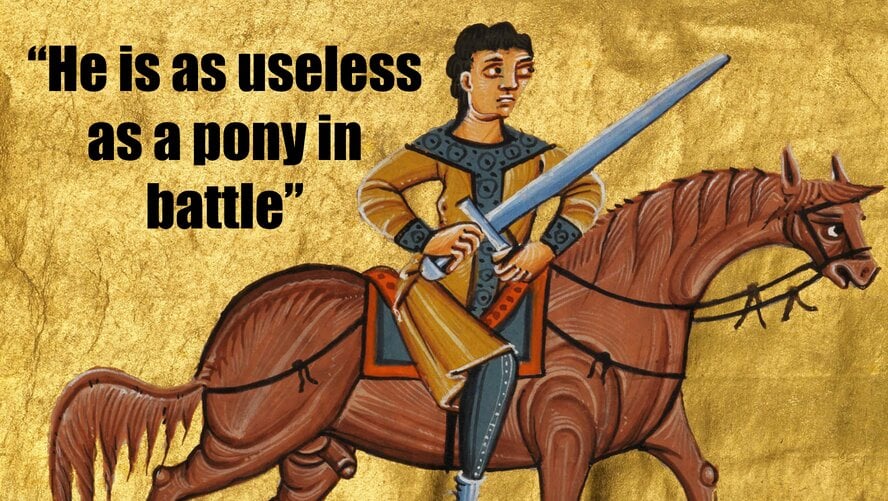 In the early eleventh century, a schoolteacher named Egbert of Liège created an instructional book for his students, for the purpose of teaching them how to read. His collection of proverbs, fables and folktales includes a few gems about warfare.

Egbert was working at the cathedral school in the (now Belgian) town of Liège when he wrote The Well-Laden Ship. Completed between 1010 and 1026, it was designed to be a textbook for his students, a way they could learn to read Latin. To make it interesting for young boys, Egbert included humorous sayings, moral tales and some short stories. You can even find an early version of the fable of Little Red Riding Hood.

“Many people often say many things in ordinary language, and that wisdom of commoners is proffered in a great many examples that are indispensable to employ,” Egbert explained in a letter to a local bishop. By collecting these, along with “some new and popular tales and with a few divine ones”, he hoped this book would be useful “for those timid little boys still subject to discipline in school; so that, when their teachers are at times absent, while that band of youths is babbling to one another certain ditties (though none of them to any purpose) in order to sharpen somewhat their meager talent by practicing and frequently chanting those little verses, at such times they might rather use these.”

One of the most interesting things about this book is how many of the proverbs he recorded are still used today. You can find in The Well-Laden Ship sayings like “While the cat’s away, the mouse is seen scurrying about”, “When a horse is offered for free, you should not open its mouth”, and “One ought to strike iron while it’s hot.” The book also contains some proverbs related to war and power. Here are a few of our favourites:

Knights are prepared for wars when the footsoldiers are alongside them.

One who prepares an army against a king, should have a king as his ally.

He is as useless as a pony in battle; someone we dislike is a fifth wheel to our cart.

A shield of strong men fortifies a camp.

How will an unarmed man fight against strong men? Gird yourself with the shields of God, you who cannot do so with real ones.

Right before the trumpets blast, it is too late for a helmeted man to rue the battle.

Strong men quarrel; perpetual discord springs from this; for neither yields to the other. Hector does not yield to Achilles.

After that of men, the greatest and deadliest battle is that of horses.

He who protects his own life does not defend worthless chaff.

Whoever captures his lord needs to bind him with strong straps. He will pay the price if the lord breaks that knot.

You should not spare an enemy, nor cease to learn his arts.

A noble horse is terrified by the shadow of a whip. You can scarcely
move a cowardly one when you urge him with your heels.

Vengeance acquired by your own hard hand seems sweeter.

He who governs his own spirit carries off the trophy of war.

Look, the king carries a sword, but not without cause: so that he may check crimes, or so that subsequent punishment may be feared.

Neither a house nor a boat can do without a leader; without him no home thrives, and a ship has no rower.

Egbert also included many short stories in The Well-Laden Ship, some drawn from the Bible and others from local folklore. One of these tells the tale of a monk named Walter, based on the legendary king Walter of Aquitaine. Eleventh-century versions of his life had him living his final years as a monk. According to Egbert, his days of fighting were not quite behind him:

The brothers gave Walter a mandate not to hand over his breeches, but to defend those, even when everything else had been taken from him without protest, whenever his journey should happen to take him among powerful enemies. Meanwhile, a test of this great soldier is afforded. By order of his brothers, he is sent on a particular business. It was fate that, unknowingly, he is mired in the midst of enemies who burst upon him, taking simultaneously his horse’s armor and his horse, his whip, all his outer clothes, and his hood too. He did not refuse or struggle; he let them do everything. At last he began to contest his breeches being taken. Experienced in military service, he was strong under armies, as is well known. He breaks their assaults, which he repressed with great strength. He hurled them down, dislodged from their horses, without bloodshed, saying, “Every other spoil, but none from their rear end, do the brothers allow to be taken from those who carry their messages. That kind of booty they deny to the greedy robber.” When he had collected the spoils and horses, he traveled to the sacred fraternity of brothers who were singing psalms in praise of God and wondering at the great military courage and brave deeds of a declining and rather aged man waging new wars.

Egbert of Liège’s The Well-Laden Ship was edited and translated by Robert Gary Babcock, and published as part of the Dumbarton Oaks Medieval Library in 2013. Just as it delighted schoolboys a thousand years ago, this book is a little joy for today’s readers.

This article was first published in Medieval Warfare magazine Issue VI:5 – you can buy that issue here. You can also get new issues of the magazine through our Patreon – click here to learn more.

Top Image: War – the Second Horseman of the Apocalypse. From the Bamberg Apocalypse, created about the same time as The Well-Laden Ship. Bamberg Staatsbibliothek, MS A. II. 42 fol.14v