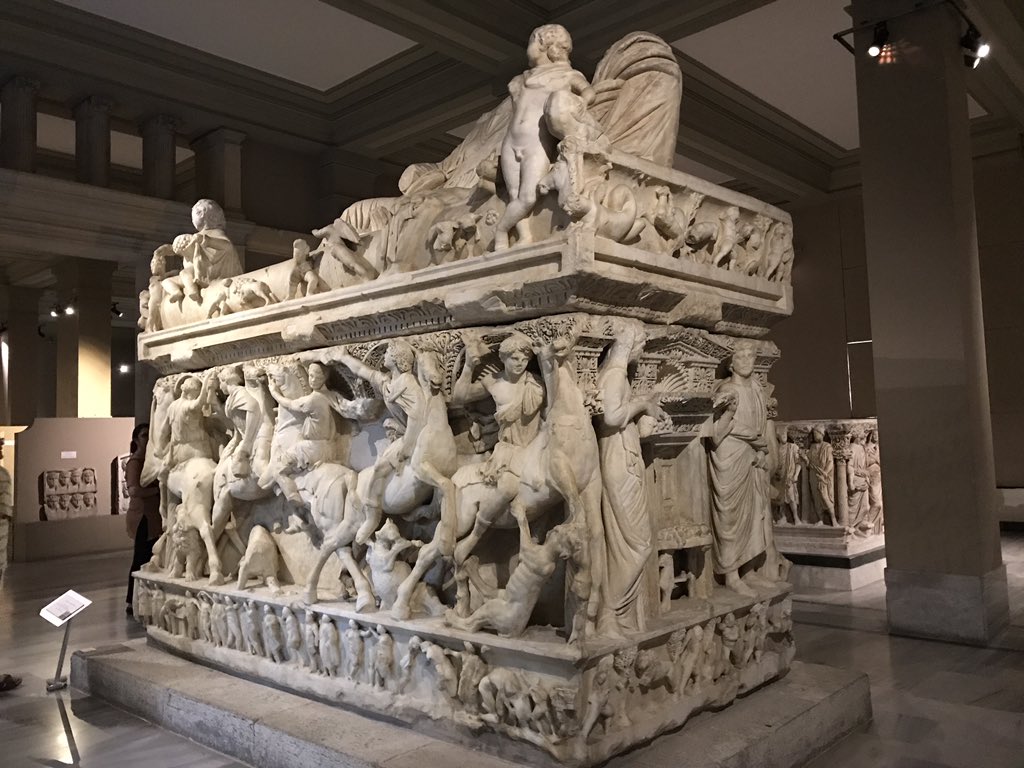 A life-sized marble head of Eros has been returned to Turkey from the Victoria & Albert Museum. V&A conservators traveled with the head and worked jointly with experts from the Istanbul Archaeological Museum to reattach it to the lid of one of the largest, heaviest and most important Roman sarcophaguses ever found, the 3rd century Sidamara Sarcophagus.

The Sidamara Sarcophagus was made in Anatolia following the model of ancient Hellenistic predecessors, and is the type find for its  design and size. Like other great sarcophaguses carved in the Athenian tradition, the sarcophagus is approximately twice as long as it is wide, 12.5 feet long and and 6’4″ wide. It is intricately carved in deep relief. The lid features a man and woman, likely the occupant of the sarcophagus and his wife, reclining. Two erotes stand on the front top corners. The replaced head is on the Eros on the left front corner.

The front façade depicts men on horseback hunting wild animals in a forest. Two trees with twisted trunks and heavy canopies cap the ends of the scene. The opposite long side depicts a man in philosopher’s robes holding a scroll seated in the center. To his left stands a woman with her head covered, perhaps his wife. To his right stands the goddess Artemis. The divine twins Castor and Pollux, aka the Dioscuri, bracket the scene with their horses. Behind them is an architectural background with elaborately detailed columns, capitals and pediments.

One of the short sides depicts a woman standing in front of the door of a tomb with an offering of fruit. The other short side is carved with a hunting scene. Friezes banded around the base of the sarcophagus and lid depict cupids fighting wild beasts, athletic contests and chariot races. 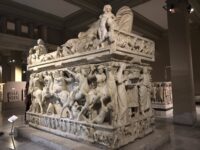 The massive sarcophagus was discovered in 1882 in the ancient city of Sidamara (modern Ambar) in south central Turkey. The finder was Major General Sir Charles Wilson, at that time Britain’s military consul general in Anatolia. He quickly reburied it, planning to keep the find hush hush until he could return and arrange to have the sarcophagus shipped to Britain. Meanwhile, he hacked off the head of Eros and took it back to England with him where in 1883 he loaned it to what was then the South Kensington Museum (now the V&A).

His plan to secure the sarcophagus and reunite it with the Head of Eros in England ran into roadblocks. Ottoman official, artist and pioneering archaeologist  Osman Hamdi Bey had been appointed director of what was then the Imperial Museum in 1881, a year before Wilson found the sarcophagus, and was a highly effective advocate for more stringent laws prohibiting the export of archaeological artifacts. There were already laws on the books, but enforcement was weak and requirements easily flouted by diplomats/military personnel/assorted representatives of European powers who smuggled out artifacts all the time with impunity. Bey played an instrumental role in breaking that cycle.

The sarcophagus was rediscovered by a local villager in 1898. He reported it to Imperial Museum and Osman Hamdi Bey arranged for its removal to Istanbul. It took teams of water buffaloes to budge the gigantic piece from the find site, and then a special train to take it to Istanbul. It was installed in the museum in 1901.

After Wilson’s death his daughter donated the head to the V&A in 1933. According to the V&A, a visitor to the museum in 1933 noticed that the head looked like a good match for the Sidamara Sarcophagus and V&A staff sent a plaster cast of the head to confirm whether it was a perfect fit. It was. At this crossroads, the V&A seemed prepared to return the head in a gross but typical quid pro quo. They’d return the head if Turkey gave them a Byzantine marble of equal value.

The deal was simply never pursued, despite having official approval. The minutes of V&A director Eric Maclagan from April 1934 might shed light on why they would want to just sort of ghost Turkey on the question. The return of this one little head, Maclagan feared, would “raise the difficulty of possible repercussions, particularly with regard to the Elgin Marbles, but I think we could justify ourselves by pointing out that this is a question of a single head missing from a large monument, of much more value if replaced than if exhibited by itself.”

The plaster cast was mounted to the sarcophagus and stood in for the real thing for 88 years while the real head remained deracinated and alone in London. Molasses-slow negotiations resumed in 2010. Now, another dozen years later, the V&A has finally signed a partnership agreement with the Turkish Ministry of Culture & Tourism and the Istanbul Archaeology Museum, sealed with the return of the head.

An initial conservation treatment took place at the V&A in London, where the marble head was cleaned and an old metal dowel was

removed, before a team from the V&A flew to Istanbul in June 2022 with the Head of Eros with the generous support of the Ministry of Foreign Affairs and Turkish Airlines. In Istanbul both teams worked to remove the existing dowel, replacing it with a stainless steel, adjustable dowel before the marble head was reattached to the sarcophagus.

The Sidamara sarcophagus, now complete after over a century, is currently on display at the Istanbul Archaeological Museum