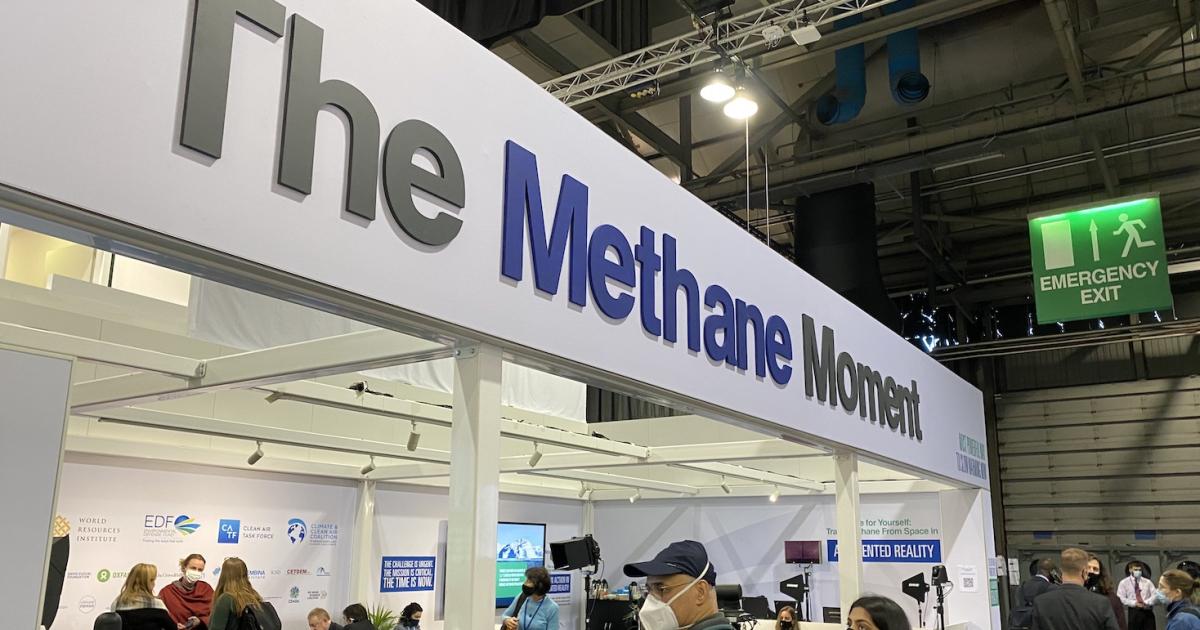 As you read this essay, there are still several days of negotiations, protests and corporate proclamations left between now and the end of COP26, but there’s no doubt in my mind the new Global Methane Pledge that emerged here last week in Glasgow, Scotland, will be one of the gathering’s enduring legacies.

The pledge, orchestrated by the U.S. and European Union and including more than 100 countries (and counting), isn’t exactly a high bar of action: The call is for countries to reduce methane emissions by 30 percent between 2020 and 2030, which isn’t actually ambitious. Still, that will buy humanity an estimated 0.2 degrees of Celsius in warming, the signatories figure. And the list includes 15 of the top 30 national methane emitters. Frankly, we need every fraction of a degree we can find.

Why this particular greenhouse gas? According to the Intergovernmental Panel on Climate Change, methane has been responsible for about half of the 1 C rise in net global rise in temperatures since the pre-industrial era. It traps heat more efficiently than carbon dioxide — 80 times what CO2 does during its first two decades — but it also dissipates more quickly. The way I see it, addressing methane and CO2 simultaneously is super important. Methane is part of the short-term fix we desperately need to keep things cooler; but we still shouldn’t be wasting time on CO2 mitigation and removal. We should pull both levers simultaneously.

“What’s incredibly encouraging about the methane moment, the methane pledge, is that we’re now recognizing that duality of solution sets and the power of employing both of them versus the approach before, which was putting them all into one [solution set] over a long period of time, which led you to undervalue the rate of warming in exchange for the maximum warming,” said Steve Hamburg, chief scientist of the Environmental Defense Fund (EDF), when I visited with him during the summit. “It turns out that if we think about damages that climate pollution does, it’s really in two basic forms: what’s the rate of change and how much change. And they are not inherently linked.”

Hamburg is co-lead for MethaneSAT, a wholly owned subsidiary of EDF billed as the most advanced methane detection satellite in the world — it will be launched in about one year. Other organizations developing technologies for the important task of data gathering and intelligence include Canadian company GHGSat, nonprofit CarbonMapper and analytics firm Kayrros. Aside from satellites, all manner of devices can be used for detection including drones, aircraft, car-mounted sensors and sensors on pipelines or at the point of production. This combination of collection approaches is important for the most complete picture of the problem.

The national commitments should help inspire a new wave of climate tech focused on reducing and removing the powerful, yet short-lived, super pollutant. The U.S. Environmental Protection Agency moved quickly to propose regulations that would set limits on oil and gas production emissions. According to the EPA, the rule would cut 41 million tons of methane between 2023 and 2035, which equates to 920 million metric tons of CO2.

What’s incredibly encouraging about the methane moment, the methane pledge, is that we’re now recognizing that duality of solution sets and the power of employing both of them …

How are we going to do this? The White House published some thinking behind the U.S. action plan for methane alongside the announcement last week. The strategies focus on three places where methane is especially problematic: the oil and natural gas sector (the largest culprit in the U.S. at about 30 percent of the emissions, or about 16 million metric tons, according to EDF); “enteric fermentation” (a fancy word for the digestive processes of cow and ruminants such as sheep, at 27 percent); and organic matter rotting in landfills (which contribute 17 percent).

The exciting thing is that many technologies or practices that could help with reduction already exist, according to those I spoke with here in Glasgow. Just Tuesday morning, Bioenergy Devco — which uses anaerobic digestion to break down organic waste in landfills, collect the gas and divert if for other purposes — disclosed $100 million in financing to build more U.S. facilities (it has 20 under development, including two in Delaware and Maryland).

Hamburg suggested that the most cost-effective solutions lie within the oil and gas sector and are focused on measures such as stopping inappropriate venting and flaring of wells and doubling down on leak detection and management. At least one-third of the operations in existence have already embraced such measures and release little to no methane, he said. “If a third of the sites can be clean, all of the sites can be clean.” Another relatively straightforward idea that the Biden administration is embracing is plugging about 1.6 million abandoned oil wells and 380,000 natural gas sites that are “continuously emitting methane.”

The most obvious focus for agriculture centers on feed additives for cows (here are just five startups working on that problem). One of the most important crops to address from this standpoint is rice cultivation, which contributes roughly 12 percent of global methane emissions.

Both of those areas have been a long-time focus for food company Mars, which deals extensively in both supply chains, according to Kevin Rabinovitch, global vice president of sustainability and chief climate officer for the company, who spoke with me about this issue during COP last week. “One of the things we mean when we say ‘net zero done right’ is all greenhouse gases. It’s not just CO2, it’s everything that is relevant for your supply chain,” said Rabinovitch.

Mars helped develop a technique for rice production, now used by the Sustainable Rice Platform, that uses alternate wetting and drying to take water off fields when it’s not necessary. (When the fields are flooded, that’s when the most methane is produced anaerobically.) “It’s about being much more strategic about the water, which reduces methane, and oh, by the way, reduces your water use,” Rabinovitch said.

How much time do corporate sustainability teams spend thinking about methane? A new manifesto for climate recovery published publicly at COP by the World Business Council for Sustainable Development (WBCSD) encourages the mainstreaming of action on this particular greenhouse gas. Among the 12 priority actions, it is listed first, with the WBCSD calling for “shared government and corporate methane emission reduction targets of 40 percent by 2030 and 75 percent by 2050.” It calls for increased funding for methane monitoring, reduction and removal.

To that last point, Methane Action, a nonprofit group of scientists, lawyers and policy experts, is encouraging pilots of emerging technologies that would remove methane that’s already in the atmosphere. Researchers representing the group during the summit described several methods, including industrial systems that might be co-located with carbon capture equipment and methods that fall into the realm of geoengineering, such as solar updraft towers and enhanced removal using iron sea salt aerosols sprayed into the atmosphere. The challenge is subjecting these ideas to thorough environmental assessments.

For now, though, the focus on emissions reduction is where corporations and NGOs are focusing their attention. And the results could be measurable relatively quickly. “Unlike for CO2, you do not have to eliminate all human-caused methane emissions in order to have no net increase in warming. In fact, you don’t even have to reduce it by 50 percent to stabilize the influence on the climate,” EDF’s Hamburg said.