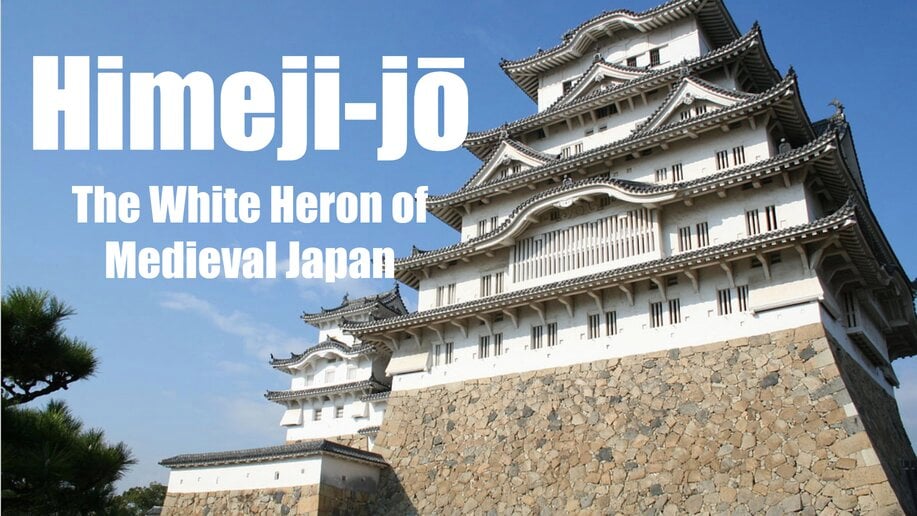 As one of the major cities of the Kansai region of Japan, Himeji (姫 路市) is located less than an hour’s train journey from Kyoto (this time can be considerably shortened if you take the Shinkansen, or bullet train). In comparison to the nearby metropolis of Osaka and the ancient city of Kyoto, Himeji appears almost modest. While it may not be on the must-see list of many tight-scheduled travelers, Himeji has a history that is as long and fascinating as any tourist town, not to mention that it is the home of Himeji-jō, or Himeji Castle.

Quoting UNESCO’s World Heritage List, Himeji Castle is “the finest surviving example of early seventeenth-century Japanese castle architecture” and “a masterpiece of construction in wood, combining function with aesthetic appeal.” Proudly overlooking the entire city from a little hill, the six-story castle, with its white walls elegantly contrasted by its dark-gray tiles, is the first thing that attracts your eye right after you’ve stepped out of the train station. Needless to say, it would also be the first thing that you’d want to walk towards and admire. But most importantly, you’d want to learn about its rich history, its rise and fall through the centuries, and its stories and legends.

The history of Himeji goes back to the Jōmon period (縄文時代, literally “the cord-marks period”), a Japanese pre-historic period that is marked by, and named after, the decorative pattern of its pottery. The city rose to prominence in the seventh and eighth centuries, when it became a political and religious center, renowned for its temples and shrines. Although the “hime-” element in Himeji means “lady” or “princess” in Japanese, the naming of Himeji has nothing to do with any princess. Rather, it has roots in a mountain which is named after silkworms (pronounced hi-me-ta), as if to commemorate the prosperity brought by the area’s silk industry. The mountain’s name appears as early as in a fudoku (風土記, a narrative of local culture, geography and folklore of a certain region) from the Nara period (710–794, when Nara was the capital).

Any attempt to narrate the history of Himeji Castle – however briefly – would be futile without a word on the Shogunate and its 700-year-long conflict with the imperial power of Japan. The title of shōgun (将軍, “general”) – conveniently shortened from Sei-i Taishōgun (征夷大将軍, or “commander-in-chief against the barbarians”) – dates back to the Heian period (794–1181), when the shōguns were still generals appointed by the emperor. In theory, these supreme military leaders were appointed only under emergency circumstances, and they were granted great power but expected to return the power to the emperor once the job had been done. However, as the case of Caesar attests, it is hard for anyone who has once tasted power to surrender it, not to mention that they have power over, and the loyalty of, the army, the key element in any coup d’état. It was not long before the shōguns became hereditary and, although they were still “appointed” by the emperor, they were the de facto government.

The history of medieval and early modern Japan is very much a history of the Shogunates. The thousand-year period is divided into four: after the Heian period, we have the Kamakura shogunate (1192–1333), Ashikaga (1336–1573), Azuchi-Momoyama (1573–1600), and Tokugawa (1600–1868). With the rise and fall of different families, clans, and cities, the demand for strong fortresses became greater and more urgent than ever. The Azuchi-Momoyama period saw the emergence of a new kind of castle complex, known as tenshu (天守, “sky-guardian”). They are keep-towers typically constructed with timbers, multi-floored, and elevated on a stone foundation. Such castles are easily defensible and hard to attack, but their high and preeminent position also makes them desirable targets. Due to their wooden structure, most tenshu perished in war or fire or succumbed to decay; to the present day, only twelve of them still stand.

Of the twelve tenshu, Himeji Castle is the finest example. In addition to its scale and complexity, Himeji Castle distinguishes itself from the others by its white color, which earns it – deservedly – the nickname ‘the White Heron Castle’. The castle was first erected in 1333 by Akamatsu Norimura, a samurai and local governor who supported the imperial cause; he built the fortress as a resistance against the Kamakura shōguns. Some two centuries later, Oda Nobunaga (織田 信長), the unifier of Japan, placed his retainer Toyotomi Hideyoshi (豊臣 秀吉) at Himeji as a daimyō (大名, “lord”) to oversee the region; Toyotomi Hideyoshi converted the old fortress into a three-story building, which was expanded again in 1601 into a six-story wooden structure that combines both elegance and military function, covered on the outside with elaborate tiles while on the inside it is full of shooting holes, spear shelves, and hidden doors for ninja-like warriors.

It has been mentioned that the “hime-” part in Himeji means “Princess,” but that no princess plays any part in Himeji. Nevertheless, this is not to say that such an important political center as Himeji Castle has not had its fair share of princesses.

Upon Oda Nobunaga’s death, Toyotomi Hideyoshi took over the power and started a series of ambitious military plans, such as to annex Korea and China. Surprisingly, Toyotomi Hideyoshi managed to survive all his wars and strife and died a peaceful death at the age of 61; yet unfortunately for him, his son was only five years old. Although Toyotomi Hideyoshi created a council of five regents in the hopes of smooth transition of power and the continuation of his dynasty, history has taught us that such things seldom go according to plan, and an underaged ruler more often than not means conspiracy and political upheaval.

It was not long before Tokugawa Ieyasu had seized power from his young liege lord. Although the purpose of marrying off Senhime was to make sure the now-deposed Toyotomi Hideyori would be a good boy, he nevertheless was a potential threat as long as he was alive. Nor was Toyotomi Hideyori content when he was old enough to understand what had been going on. All this hatred, the family feuds, and the thirst for power reached their summit in the Battle of Sekigahara, taking place on Oct 21, 1600. The castle of Osaka, where Toyotomi Hideyori resided, fell; Toyotomi Hideyori, his mother Yodogimi, and his son by Senhime committed harakiri, or suicide by disembowelment.

Senhime, however, was lucky enough to escape the siege of Osaka. Legend has it that Tokugawa Ieyasu promised to (re)marry Senhime to whoever could rescue her from Osaka Castle. Sakazaki Naomori, a Tokugawa retainer, fought hard to rescue the princess, for he was in love with her. However, the princess disfavored him because of his scarred face; she favored instead the handsome Honda Tadatoki (本多 忠刻), son of the then-keeper of Himeji Castle.

So, the hime moved into Himeji Castle, which was expanded yet again with Senhime’s dowry, and lived a few happy years there. Rarely enough for political and arranged marriages, Senhime was actually in love with her husband, who, unlike her first husband, was a man of her choosing. They had two children, a daughter and a son. However, Senhime’s happy days ended prematurely with the death of her son, aged three, followed closely by Honda Tadatoki’s death. Overwhelmed with grief, Senhime retired to Edo (Tokyo) and became a Buddhist nun – she had already been famed for her piety when she was in Himeji, and the shrines and temples she sponsored bore witness to her devoutness. Even in her later days, she was active and played an important part in Japanese history: she fostered and raised the fourth Tokugawa shōgun, who escaped the typical fate of underaged rulers – something that Senhime’s first husband had not managed.

Every castle has its fair share of ghosts, and Himeji Castle is no exception. The most famous Himeji ghost would be a lady-in-waiting called Okiku (お菊), whose story has survived in various versions and was popular subject matter in theatrical performances.

According to the Himeji version, Okiku’s story also involved a plot to dispose of an underaged lord, though we need to travel further back in time to the fifteenth century for the full story. When the previous lord died of disease, a disloyal retainer called Aoyama Tessan conspired to murder the young lord and take over control of the region. However, his plot was suspected by a loyal supporter of the lord. In order to find out precisely what Aoyama Tessan was up to, he placed his lover, Okiku, as a maid in Himeji Castle so that she could pass information on to him. Okiku bravely did what she was tasked to do. Thanks to her information, the lord escaped murder by a hair’s breadth.

During the absence of the lord, Aoyama Tessan captured the castle and ruled over it as if he were the rightful heir. He knew that it must have been a spy’s work that the lord was saved. The suspicion fell onto Okiku. In the absence of any concrete evidence, Aoyama Tessan stole one of the ten precious Dutch Delft plates that had been placed in Okiku’s care and punished her for “stealing” the treasure. Okiku was tortured and beaten – but first, she was offered a chance to become Aoyama Tessan’s lover and help him achieve what he had failed to do, namely, to murder the lord. Okiku refused; Aoyama Tessan killed her by throwing her body into a well just below the castle walls.

However, Okiku returned as a spirit. After nightfall, those who lived in Himeji Castle would hear a woman’s voice from the well: “One plate, two plates, three…” She would count up to nine, cry, and start all over again. In one of the versions, Okiku eventually got her justice: Aoyama Tessan was driven crazy by her counting, and, perhaps, by his own guilty conscience. But in other versions, Okiku was silenced by an exorcist, who shouted “Ten!” when Okiku counted to nine. In either case, Okiku is no vengeful ghost, but a serene yet desperate girl burdened with fear and sorrow, lamenting for the life and love that she foresaw were lost.

Dr. Minjie Su studies Old Norse (and some other old things), and researches werewolves in medieval Icelandic literature. She is a self-labelled artist of the Post-Pre-Raphaelites and is also a knower of cats. You can follow Minjie on Twitter @Aethelcat_su