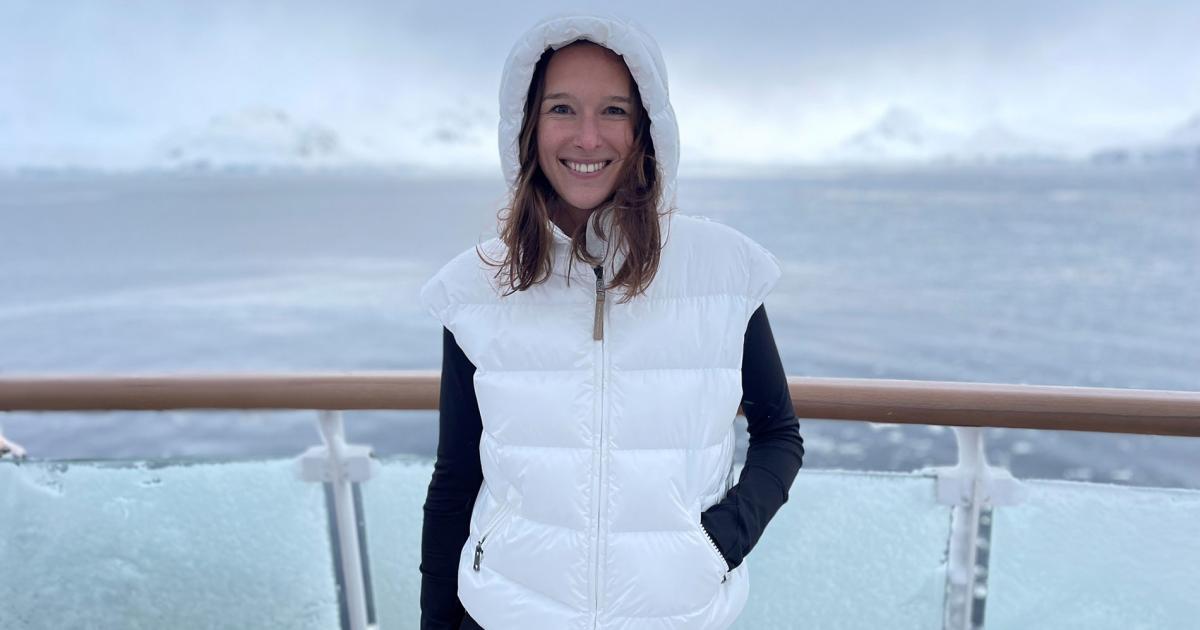 The Drake Passage, a 600-mile waterway that connects the Atlantic and Pacific Oceans around Cape Horn, is considered the roughest sea in the world. Thirty-foot swells rock the ship I’m on so much that at one moment my whole view is a solid wall of gray, swirling water, and in the next all I can see is sky. Sea sickness abounds, as passengers including me grab tightly to rails when trying to walk. Waves are crashing on deck and alongside the ship, which is engulfed by mist and fog.

But we must navigate the Drake Passage, no matter how treacherous, because it is the gateway to Antarctica, the last great wilderness and our destination.

I’ve traveled to Antarctica as my company’s ambassador on an expedition organized by Sir Robert Swan, the first person to walk to both the South and North Poles, and his 2041 Foundation that is dedicated to the preservation of Antarctica. My assignment is to drink in all the splendor, biodiversity and power of nature and convey to colleagues at home eyewitness accounts of how close we are to losing it.

I’ve traveled to Antarctica as my company’s ambassador on an expedition organized by Sir Robert Swan, the first person to walk to both the South and North Poles.

It’s not a new message — 15 years ago, my company sent its first ambassadors to Antarctica with 2041, which led to a dramatic increase in new sustainability work on behalf of our own firm and clients. One of the first ambassadors is now our global head of sustainability. The point is to create passion around sustainability and then use that passion, not just data points, to make sure the topic translates into all our consulting work, not just climate-related assignments.

That said, the irony that our ship and expedition are creating emissions as we make our way to Antarctica on a quest to reduce emissions is not lost on any of us. Yes, we are offsetting them through carbon-offset projects, but there’s no denying our temporarily expanded carbon footprint.

The continent of Antarctica and its ice, ocean and ecosystems play a critical role in regulating the global climate. Together, they help to slow global warming, drive important ocean currents and contribute to the drawdown of millions of tons of carbon dioxide from the atmosphere. There are 170 on the expedition from 35 nations on the Ocean Victory, including executives from some of the world’s largest companies, documentary filmmakers, poets, high school teachers and university students — all determined to view first-hand damage being done to Earth’s southernmost continent by climate change.

It’s the very end of the Southern Hemisphere’s summer and there’s still a good chunk of day with sunlight. Soon there will be four months of total darkness. Our first glimpse of the ice-encrusted continent is of a cluster of icebergs floating on the dark blue-gray sea. Typically, only one-tenth of an iceberg’s volume is above water, the remainder — a beautiful turquoise mountain of ice — hides beneath the seawater.

We’re on the hunt — photographically, of course — for the rugged region’s wildlife, most of which live in or near the bountiful seas surrounding it. Penguin colonies populate the banks, alongside their principal predator leopard seals that can weigh as much as three cars. There’s also a show of divers nearby as albatross, petrels and cormorants seek their next meal.

I strain to hear the calls of humpback whales and watch hopefully for one of the 35-ton creatures to flap its tail or breach the waves. In Antarctica that quest is unlikely to go unrewarded even though centuries of hunting and now loss of habitat have decimated their numbers.

Unfortunately, I also observe among the many natural beauties the unnatural impacts of humans on this great wilderness — glimpses of plastic litter or other refuse. But more may be coming as we saw literally tons of plastics and waste strewn across the waters and littering the shores around Patagonia.

And then there’s the temperatures. In March, coasts of Antarctica have been as much as 40 degrees Celsius warmer than monthly average temperatures of past decades, according to the National Centers for Environmental Information. That’s a difference of 72 degrees Fahrenheit. The abnormal warmth has shrunk sea ice and killed off large portions of the population of shrimp-like crustaceans called krill that form the basis of the marine food web for whales, seabirds, fish, squid, seals and sharks. The warmer temperatures have allowed me to rely on cold weather clothes I use in New York City and worry less about frostbite.

The mission of our expedition is to engage and inspire a new generation of leaders to take responsibility for preserving Antarctica and all our planet’s habitats. Many on the trip are already foot soldiers in the fight, spearheading tree-planting initiatives, creating documentaries about climate change and undertaking composting, plastic recycling and other circular economy endeavors.

But none of that will be enough as we enter the last great battle for the planet. Antarctica may be uninhabitable for humans, but it’s where hundreds of animal species would be thriving were it not for the destructive incursion of human lifestyles.

With no other humans besides ourselves in sight, our incidental role in the functioning of nature becomes clear. Nowhere on earth is it more evident that this is not our planet to destroy. Yet destroying we are.

At the heart of the 2041 Foundation is the preservation of the Madrid Protocol, a treaty that protects Antarctica’s pristine landscape and habitats from humans. In 2041, the protocol could face potential amendment that would lift the ban on mining and mineral exploration, a deathblow for the region and its role as a climate stabilizer for the planet.

This trip has convinced me and others on it that we must act well before 2041 if we are to save Antarctica’s wonders, our planet and ourselves. Efforts to stop climate change have been all about making promises, most of which remain promises unfulfilled. But the images of this trip will stay with me my entire life and hopefully help me sustain the promises I made to myself when I arrived home — to change my own lifestyle and help educate the broader community whether by speaking to high schools or supporting community efforts to reduce waste and excess.

Most important, I will work above and beyond with my corporate clients to help them identify the best possible ways to cut emissions and deliver on their 2030 and 2050 targets. Those are promises that would change our planet’s trajectory, and helping to fulfill them is a place where I can make a difference.