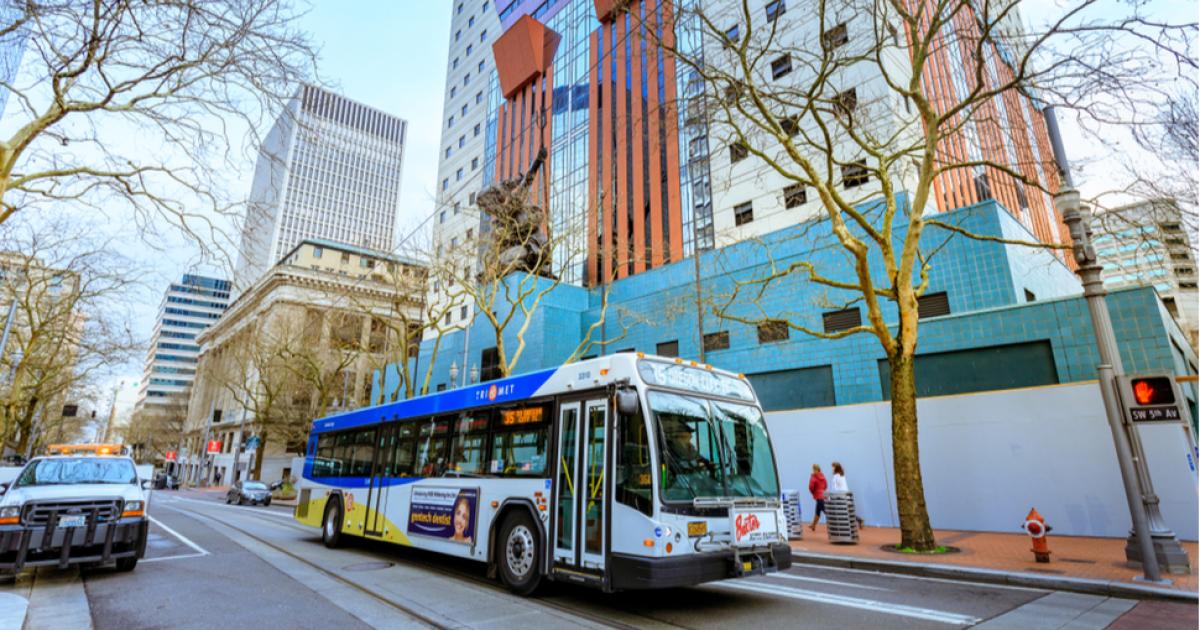 This story was first published on Next City, a nonprofit organization with a mission to inspire social, economic and environmental change in cities through journalism and events around the world. [Read the original article at Next City.]

Faced with a goal to achieve a zero-emissions transit fleet by 2040, TriMet in Portland is exploring all of its options.

The obvious solution for transit agencies to get to zero-emissions is to replace fossil-fuel-burning buses with electric ones. But TriMet is also considering converting its existing fleet to battery-electric. This approach would have several advantages: The agency would receive its converted buses relatively soon after placing the order, meaning it would be able to reap the cost savings, reduced emissions and reduced maintenance costs sooner. And a conversion would allow a perfectly good bus body to have another chance at life carrying passengers.

While the agency hasn’t yet decided whether it will convert all of the buses in its almost 700-vehicle fleet, it’s already taken steps toward zero emissions, which include converting several diesel-fuel-burning buses, including an accordion bus, into battery-electric. According to TriMet, the conversion of the accordion bus cost $1.2 million and the conventional buses $718,000 each, about $200,000 less than purpose-built electric buses, regardless of size, purchased by other agencies across the country.

The accordion bus is being tested by packing it with large barrels of water to simulate a bus full of passengers, says TriMet spokesperson Tia York: “If testing proves successful, TriMet could accept delivery of the three converted 40-foot buses by the end of the year.”

Although the idea of converting buses to battery-electric has been around for close to a decade, few examples exist across the nation, mainly because the buses don’t have as much range as a purpose-built electric bus. “While a retrofitted diesel bus running on [an] electric battery is a great improvement in terms of emissions, it generally does not perform as well in terms of range as does a purpose-built one,” said John Boesel, president and CEO of high-tech clean transportation nonprofit CalStart. “Purpose-built electric buses perform better because they are optimized for the electric powertrain and batteries.”

Although the idea of converting buses to battery-electric has been around for close to a decade, few examples exist across the nation.

Lightning E-Motors, based in Loveland, Colorado, converted one 14-year-old diesel bus owned by the city of Boulder into an electric one. It was something they had never done before, and it worked out only because that bus had an engine failure that would have cost more to replace as opposed to buying new.

But the body was still in decent condition, says Nick Bettis, who directs business development at Lightning E-Motors. “​The [diesel bus] bodies are built to last for 20 years, [while] the powertrains usually last only about five.” They’ve since gone on to offer conversions on shuttle vans, delivery trucks and charter buses. “So instead of replacing it with a gasoline or diesel powertrain the company’s fleets are coming to us and saying, ‘Why don’t you put electric powertrain instead?’” adds Bettis.

While neither Via Mobility Services, a Boulder-based nonprofit that operates transit service in the city (not related to the ride-hailing company of the same name), nor Lightning E-Motors will disclose the cost of the conversion, with Via citing a non-disclosure agreement, both told Next City it’s much cheaper than buying a purpose-built electric bus. Bus and Motorcoach News reported the conversion cost to be $260,000.

Two other transit agencies, TransIT Services of Frederick County and IndyGo, worked with Riverside, California-based Complete Coach Works (featured on CNBC’s “Jay Leno’s Garage” for its conversions) to purchase five and 20 of these converted electric buses, respectively, in 2016. IndyGo paid $579,000 per bus, while TransIT paid $564,000 each. Said TransIT Director Roman Steichen in an email, they “were the best and most cost-effective option at the time.”

In the years since, all the agencies report it’s helped them work towards achieving their respective zero-emissions goals. It’s also helped them save a fair amount of money. TransIT saved $358,000 over the past five years in fuel and maintenance, about 3.5 times less than the cost of fueling and maintaining a conventional diesel bus. And they also seem to perform well in varied terrain, which include mountain ranges and agricultural plains.

For TransIT and IndyGo, the battery life appears to be the biggest hindrance in being able to run them throughout the day. “The five refurbished buses can go for a couple of hours, but then need to be charged during the lunch hours before an afternoon shift,” Steichen said, adding the battery life varies when temperatures drop below freezing.

Perhaps related to the battery-life issue, IndyGo replaced some of its buses — which were converted in 2015 from buses built at the turn of the 20th century for two Los Angeles-area agencies — with hybrid buses last summer. Even though the new hybrids, which cost $623,000 per bus, are more expensive to buy, their range is more than three times greater. IndyGo declined an interview request.

Elsewhere in the United States, some agencies with first-generation electric buses have either retired them or are considering doing so because of problems with their batteries and chargers, and their inability to secure replacements. They include VIA Metropolitan Transit in San Antonio, which recently auctioned off its nine-year-old battery electric buses, as well as the Regional Transportation Commission of Washoe County in Reno, and Foothill Transit in the Los Angeles area. Retiring buses early is no easy feat, as it requires either conducting a cost-benefit analysis or lobbying either the Federal Transit Administration or Congress to change the current lifecycle expectation, which is 12 years.

In fact, it might make sense to convert a diesel bus into electric, simply so that the bus body can be disposed of along with the battery when the battery dies.

But Via Mobility’s Lyndsy Morse says the nonprofit doesn’t have plans to convert any more of its diesel buses, which continue to operate today, because there aren’t a lot of financial incentives for bus conversions, especially given the recent passing of the Infrastructure bill that, according to CalStart, will increase investment in low- and zero-emissions buses fivefold. “Much of the funding that is available is only for a brand new vehicle so that’s likely the direction we’re gonna go,” says Morse. Via recently purchased three electric buses to accompany the lone converted bus on the Hop route.

And although TransIT wants to transition into a full zero-emissions fleet, not only does it need the money, it also needs the battery range to operate through the service area. “Full transition will not be feasible until electric range rivals that of an equivalent diesel bus,” adds Steichen.