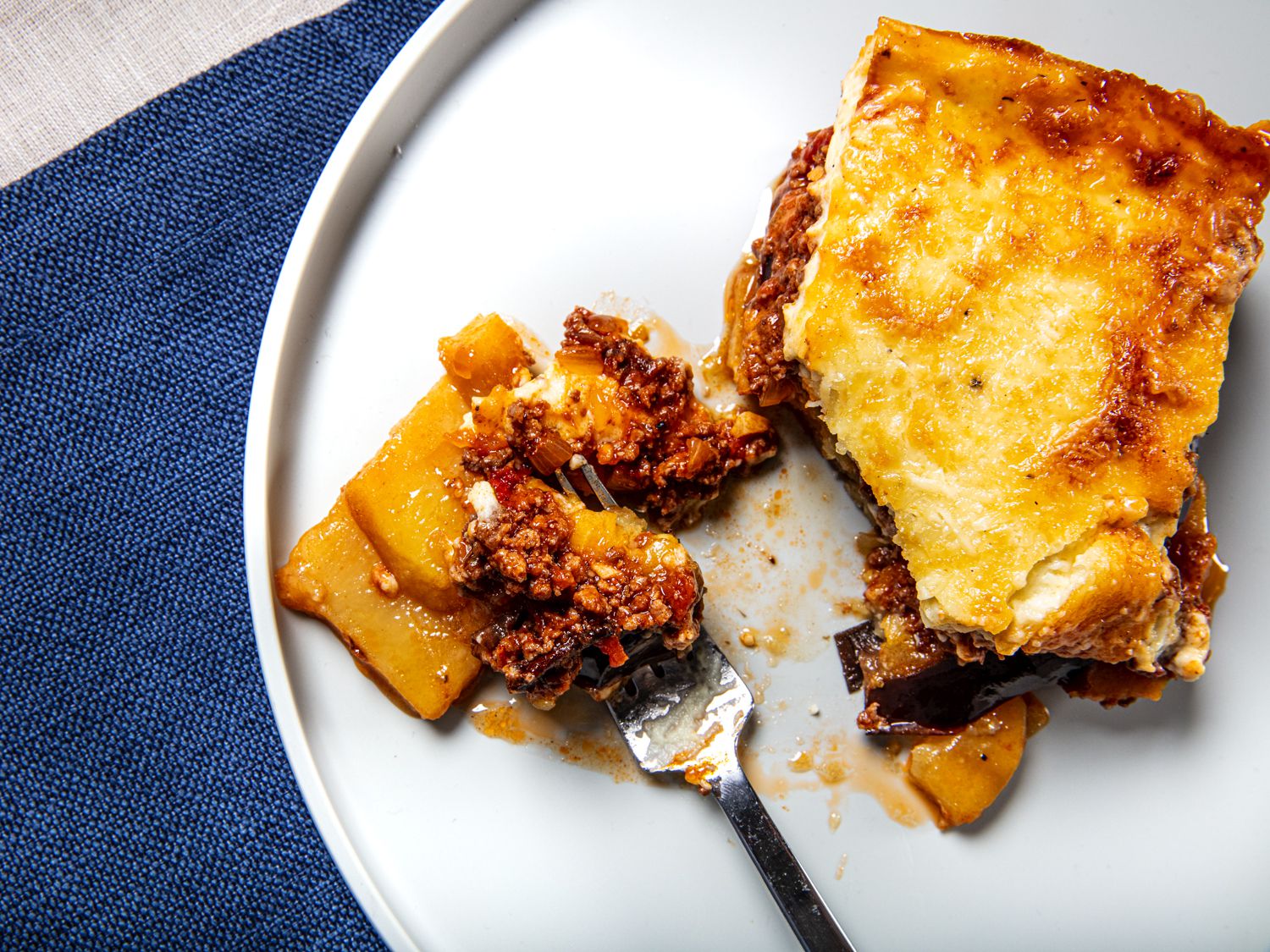 Every time I eat moussaka, I crave its rich, hearty layers of eggplant, meat sauce, and béchamel for weeks after. So I jumped at the chance to develop a recipe. After many hours of testing, I finally had a dish I was proud of: layers of fried potatoes, silky eggplant, and a rich, tomato-based meat sauce, all blanketed in a creamy béchamel sauce.

This moussaka closely mirrors the Greek version, which was created in the 1920s by Greek chef and cookbook author, Nikolas Tselementes. Before Tselementes, moussaka typically consisted of layers of eggplant topped with a tomato-meat sauce; it wasn’t the moussaka we know today. Tselementes added béchamel sauce and his version is now basically synonymous with moussaka in the US. That said, other variations of moussaka exist in many countries, including Albania, Turkey, and Egypt.

To make sure I was on the right track while developing my recipe, I spoke with Rona Econamou, a cook who does Greek food pop-ups in New York City, and Elsa Stamatopoulou, who hails from Greece and often makes moussaka at home for her family. Each woman spoke with me at length about the dish, patiently answered all of my questions, and walked me through how they prepare its components. I learned that since moussaka is a labor-intensive dish, it’s mostly served at special occasions or in the summertime, when tomatoes and eggplant are in season. I was surprised to hear that while their versions shared the same basic components―eggplant, meat sauce, béchamel―they had markedly different opinions about whether or not there should be potatoes, whether the meat should be lamb or beef, which spices should be added to the meat sauce, and how to cook the eggplant. With their insight in hand, I tested version after version of moussaka, making changes along the way, until I found my perfect version.

A quick search for “moussaka” turns up plenty of recipes with their own take on the béchamel sauce. Besides the standard ingredients of butter, flour, and milk, many cooks incorporate eggs, egg yolks, cheese, or yogurt into the sauce. For moussaka, you want a thick béchamel, one that sits tall on top and doesn’t seep into the layers below. I found that a béchamel made from 3 tablespoons of flour per cup of milk could produce a substantial layer on top, even if it was slightly bland and one-dimensional, layer. To give it flavor, I add shredded kefalotyri cheese (which I learned about from Rona and Elsa), a salty, hard cheese from Greece whose sharp flavor is similar to Pecorino Romano. To give it a creamier, custard-like consistency, I enriched the béchamel with egg yolks. Once baked, it’s rich, gooey, and so good that my toddler asks for extra servings of the béchamel alone.

According to Rona and Elsa, the meat sauce can be made with ground beef or lamb, but at the end of the day, it’s really up to the cook. I tested with all beef, all lamb, and a combination of the two. The version made with equal amounts of beef and lamb yielded a flavorful meat sauce that can stand up to the additional spices and tomatoes. In the recipe below, I let you choose the meat so you can enjoy the moussaka however you like it.

Once the meat is browned, I add aromatics in the form of garlic and onion, followed by tomato paste and a dry red wine for richness and depth. For the tomatoes, in-season ripe tomatoes are what’s traditionally used, but since the quality of tomatoes varies depending on availability and the time of year, I use canned, peeled, whole tomatoes, which add body, brightness, and acidity. Finishing the sauce with a cinnamon stick, cloves, bay leaves, and dried oregano deepens the flavor and adds complexity.

I love fried eggplant; it’s sweet, soft, and, yes, a little greasy. In light of that fact, I didn’t test versions of this recipe using alternative methods for cooking the eggplant, but I did run two tests on frying eggplant: salting the eggplant, microwaving the slices, then pressing them to remove excess moisture prior to frying, and straight-up frying plain slices of eggplant. Once baked in moussaka, I failed to notice any difference between the two. So my recipe calls for frying the eggplant in oil until golden brown (be sure to top up the oil between batches since eggplant soaks it up), letting them drain on paper towel-lined trays, and seasoning them with salt.

With the eggplant taken care of, I turned my attention to the potatoes. Rona and Elsa had opposing views on the matter of potatoes. “I’ve never seen moussaka without potatoes,” Rona says. Elsa, on the other hand, dislikes potatoes in her moussaka and emphasizes that potatoes “cheapen my dish.” With their hot takes in hand, I made side-by-side tests of moussaka with thinly-sliced Yukon Gold potatoes prepared the following ways: par-cooked and fried. I also made a moussaka without potatoes as a control. I fully expected to like the one without potatoes best (given my love of eggplant), but I discovered that I liked potatoes in my moussaka. The one with par-cooked potatoes fell short―the potatoes tasted under-seasoned and water-logged. However, the version with fried potatoes was excellent: their crisp starchiness was a welcome foil for the heaviness of the eggplant, meat sauce, and béchamel. So in this recipe, I fry the potatoes just like the eggplant, until golden brown on both sides, and then finish them with a dash of salt.

This recipe makes a lot of moussaka, so I use a sturdy 9- by 13-inch baking dish placed on top of a foil-lined baking sheet to catch any spills. I begin by arranging a single layer of fried potato slices in the pan (it’s okay to slightly overlap them as you would in a gratin) followed by a second layer on top, then I do the same with the fried eggplant. Spoon the meat sauce over the eggplant, pour the béchamel sauce on top (I like to use a small offset spatula to make a smooth surface), and sprinkle shredded kefalotyri over the entire thing.

After baking, I let the moussaka rest for 30 minutes to firm up the layers before slicing and serving. Since moussaka is particularly filling, Rona and Elsa say it’s typically served with fresh bread, Greek salad, and spinach pie. Personally, I’ve found that I like a square of moussaka as-is, savoring each layer, before helping myself to another slice.

For the Béchamel: In a medium saucepan, melt butter over medium-high heat. Add flour and whisk to form a paste. Cook, whisking constantly, until raw flour smell is gone but flour has not browned, about 1 minute. While whisking constantly, slowly pour milk in a thin, steady stream until all of it has been added (sauce will initially become very thick, then get very thin once all the milk is added). Continue to cook, stirring frequently, until béchamel comes to a simmer and begins to thicken slightly. Reduce heat to low and cook, stirring constantly, until béchamel is thick enough to coat the back of a spoon, about 5 minutes.

For the Meat Sauce: Heat oil in a large pot or Dutch oven over high heat until shimmering. Add half of ground meat and cook, stirring and scraping bottom of pot, until well browned, 6 to 8 minutes; use a potato masher or large whisk to break up meat as it cooks. Add remaining meat and cook, continuing to break it up with masher or whisk, until just cooked through and reduced to small bits, about 3 minutes; lower heat as necessary to prevent scorching. If there is excessive rendered fat, drain off all but about 1/4 cup (60ml). Add onion and garlic and cook, stirring and scraping bottom of pot, until just beginning to soften slightly, about 4 minutes.

Add tomato paste and cook over medium heat, stirring, for 1 minute. Add red wine, then increase heat to high and bring to a simmer. Cook, scraping up any browned bits, until wine has almost fully evaporated. Add canned tomatoes and their liquid, cinnamon stick halves, cloves, bay leaves, and oregano. Return to a simmer, then reduce heat to low, and cook, stirring often and crushing the whole tomatoes roughly with a spoon, until sauce has reduced and thickened and meat is coated in a silky glaze, about 30 minutes. Discard cinnamon stick halves, cloves, and bay leaves. Season with salt and pepper to taste and set aside.

Meanwhile, for the Vegetables: Line two rimmed baking sheets with a double layer of paper towels. In a large Dutch oven or wok, heat 1 inch vegetable oil over medium-high heat to 375°F (190°C). Working in batches to avoid crowding the oil, fry eggplant slices in a single layer, turning once halfway through, until golden-brown on both sides, about 5 minutes. Transfer fried eggplant to prepared baking sheet, season with salt, and set aside.

Top up Dutch oven with oil as needed and return oil to 375°F (190°C). Repeat frying process with potatoes, frying potatoes in batches until golden brown all over, about 3 minutes. Transfer fried potatoes to second prepared baking sheet, season with salt, and set aside.

To Assemble and Bake: Adjust oven rack to middle position and preheat oven to 375°F (190°C). Set a 9- by 13-inch baking dish on a foil-lined rimmed baking sheet. Arrange fried potatoes in two even layers that cover the bottom of the baking dish (potatoes can overlap slightly). Arrange fried eggplant in a single even layer on top of potatoes (eggplant slices can overlap slightly). Top with all of the meat sauce, using a spatula to spread it in an even layer on top of the eggplant. Top with all of the béchamel sauce, spreading with a spatula to cover meat sauce completely. Sprinkle top all over with shredded kefalotyri.

Bake moussaka until top is golden brown and moussaka is warmed through, about 50 minutes. Let stand for 30 minutes before slicing and serving.

Kefalotyri is a salty, hard cheese from Greece made from sheep or goat’s milk. If it’s unavailable, substitute with Pecorino Romano.

Covered tightly with plastic wrap, moussaka can be refrigerated for up to 5 days. To reheat, preheat oven to a 350°F (180°C), transfer moussaka to oven, and heat until completely warmed through, about 30 minutes.