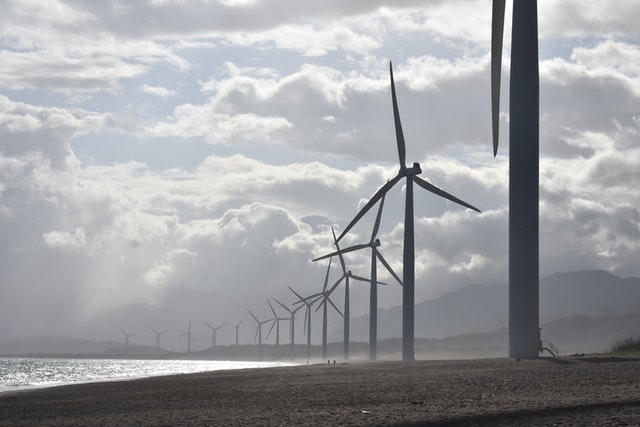 The green movement refers to the switch from nonrenewable resources to renewable sources for cryptocurrency mining.

In this article, we will explain how cryptocurrencies can become sustainable by using wind energy. Let’s dive in.

With its yearly electricity consumption of roughly 91 terawatt-hours, Bitcoin mining alone was believed to raise global temperature by 2°C.

These alarming statistics triggered a quest to build a sustainable future for cryptocurrencies. In fact, various Governments and individuals began supporting sustainability efforts by offering rewards.

Following this, alternative consensus mechanisms like Proof-of-Stake, Proof-of-History, Proof-of-Elapsed-Time, etc gained traction. In fact, the proof-of-work mechanism has not been used in five years.

However, at the heart of the green movement is a need to move from nonrenewable sources of energy to renewable ones.

In that quest, solar resources are currently the most adopted.

But what if we told you there is a hidden gem?

Let us introduce wind energy to you.

The sustainable future of cryptocurrencies is powered by 5 major renewable sources. They are Solar, Hydropower, Geothermal, Biomass, and Wind.

Wind Energy involves the use of wind turbines to generate electricity by rotating propeller-like blades around a rotor. The rotor turns the driveshaft , which turns an electric generator.

Despite being the largest source of renewable power in the USA, wind energy is often understated.

In addition, wind energy produces over 6% of global electricity and is widely recognized as the cleanest energy source.

It is twice as efficient as solar energy and dramatically low in cost. Wind energy requires little to no maintenance with a wind turbine lifespan of 20-25 years.

With over $300 billion now invested in wind and solar energy, recognition is rising for the energy source. In addition, various tax benefits and subsidies are incentivizing miners to begin using wind energy.

Theoretically, powering mining activities is quite possible with wind energy. However, a number of factors must be considered. They include:

This is a crucial factor in setting up a renewable mining operation. The best locations to access wind resources are typically on high mountains, in large open fields, or on the edge of bodies of water. The selection of an appropriate site is the key to the financial and technical success of wind-energy mining projects.

The power generated by wind turbines is dependent on three factors namely Wind speed, air density, and area size. These factors help in calculating the power requirements for each mining rig. Also, it helps determine how many wind turbines will be necessary.

The amount of wind turbines determines the cost of set-up, power generated, and the space required for installation. Also, this number is affected by the region in consideration as well as electricity requirement.

The number of wind turbines required can be calculated by considering the mining equipment used and the power needed. This number must be decided before switching to a wind mining system.

It would not be an exaggeration to label this the most important factor in switching to green mining. Although the high cost of wind energy is a major restraint to its adoption for mining, technological advancements, as well as government subsidies, are gradually reducing production costs. To compute the real rate of return as well as expenditures and income, programs are available as aid.

Green mining is always advisable but these factors must be weighed to ensure profitable mining. After careful consideration, the most suitable method for mining can then be determined.

Mining with wind energy is definitely possible but may be inadvisable for the individual miner due to cost.

By joining professional investors and contractors, small-time miners may still earn profitable returns while enjoying the benefits of green mining.

At EZ Blockchain, we aim to breach the gap between the energy sector and the blockchain ecosystem. By providing solar and wind crypto mining services, we solve global waste energy problems associated with crypto mining.

Furthermore, we provide profit for both producers and landowners while meeting environmental protection regulations.

EZ Blockchain is an innovative company that understands the problem of climate change is driven to create an eco-friendly yet profitable solution.

The post How to mine BTC with Wind Energy? appeared first on The Environmental Blog.