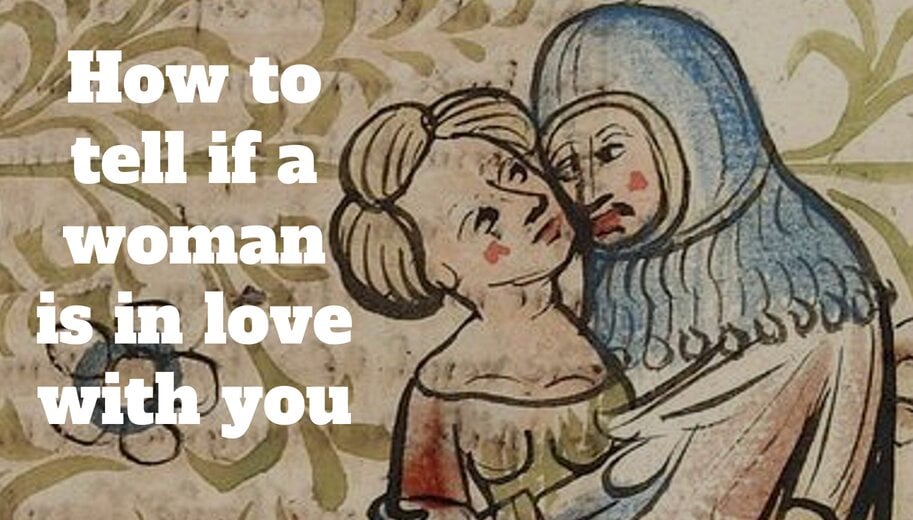 Somewhere around the year 1400, the work known as Speculum al foder (Manual to Copulate) was written in Catalan. Only two copies have survived from the Middle Ages, and it wasn’t until relatively recently that scholars in Spain could even write about this text. While most of the text is focused on sexual matters, with detailed instructions, it also includes some bits on the psychology of relationships.

In one section, the author states “I want to explain how women fall in love with men. This happens in two ways: first, by sight and second, by hearing what is said.” The author also notes things that women like in men and even offers several signs that show if a woman has fallen in love with a man.

While many of these could seemingly originate from the stereotypical stuff you hear about in high school hallways, or on a TV sitcom, these are over 600 years old. Here are ten of our favourites:

1. When he is around, she will show him her beautiful manners and gestures, but will also yawn and sigh a lot.

2. “If by chance she sees her lover, then she loses her shyness and those present clearly notice this. If the man questions her or asks her anything, she answers something different. But if she wants, she accepts the proposal. In short, she always acts like she has her head in the clouds.”

3. If the man hasn’t noticed her when she is near, the woman will try to attract his attention, “with her body and makes gestures,” and will even talk to people around him.

4. If she is lying on a bed, the lady will pretend to play with her hair, tap her fingers on the floor, bite her lower lip, and “stare at him from the corner of her eye.”

5. The woman will have lost weight, and no longer feel hungry or thirsty. Our author might not be too far off here – as studies suggest that weight changes often occur in the early stages of relationships.

6. Besides sighing often, the girl may also have tears in her eyes, and will hold her own hands.

7. If you are the man’s enemy – watch out! She will ridicule and speak poorly of that person, hoping that man she likes will hear of it.

8. When the man is away, she will “count the days” until his return, so that he knows she hasn’t forgotten him.

9. If there is a child nearby, she will pick it up, hug it, and even play with it.

10. “She requests things of him subtly so as not to anger him, and invites him to take together whatever she has, even if he does not need it. She also reveals that she dreams of him, and she displays a great joy when she sees him.”

Our anonymous writer also has a way to get a woman to fall in love with a man, even if she has already rejected him. It involves sending a messenger – it needs to be an unmarried woman who is discreet and ingenious, the type that could easily get invited to someone else’s home. There are a few kinds of women that could do this: “a matchmaker, a midwife, a seller of jewelry or women’s clothing, a matron or a Beguine.”

Before sending her, one will need to feed and pay this woman, with promises of more money, then have her go to the lady’s home when no other men are there. The text continues:

Have the messenger wear a good perfume so that the woman she is going to meet will ask her what the smell is. And the messenger has to tell her that she comes from Peter or John’s house, for example. Then she has to laugh to make the woman ask her the reason. Later she has to explain to her that you are dying for her and for her love, and that if she does not requite you, you will really die. The messenger should also tell her that is why you are becoming crazy and ask her if there is anything she can do for you.

If this works, our anonymous author simply says “Congratulations.” But if not, have the messenger then reveal that the man will try to marry someone else. Then just play the waiting game.

One might think this advice is a little dated. But if you want to read more about relationships and sex, you can find the Speculum al foder translated in The Catalan Kamasutra and other medieval sex manuals, by Victor Perez, published by Edicions Excalibur in 2022. You can also get it on Amazon.com