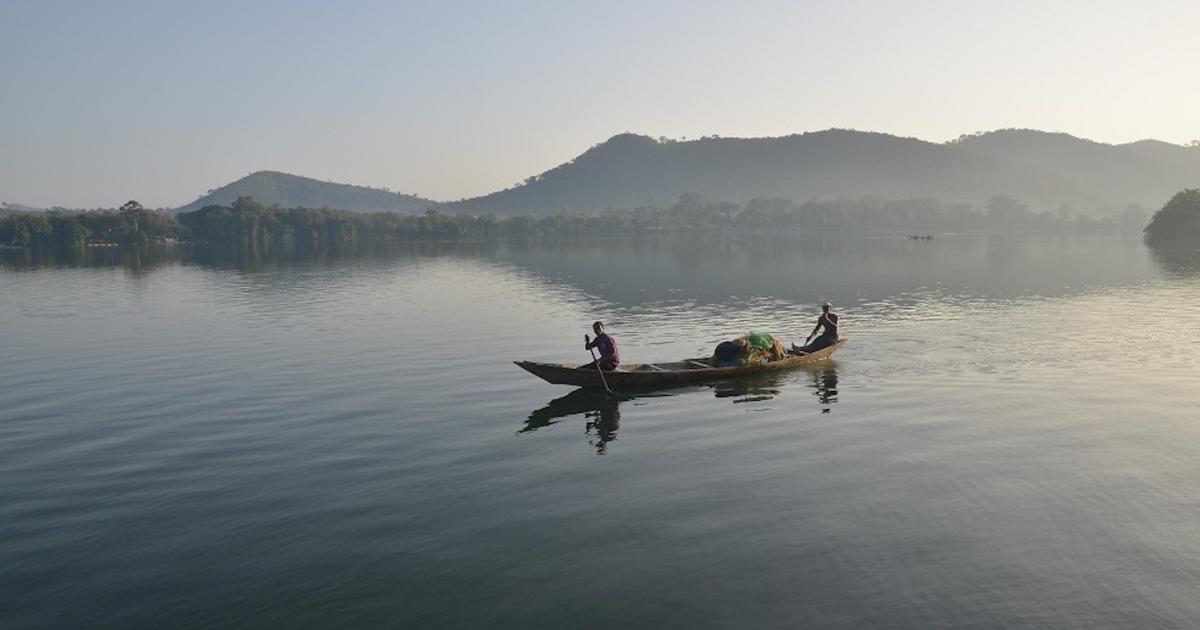 Must nature and civilization be opposing interests? Is nature conservation anti-people? What must be preserved to preserve what needs preserving? Is there a single path that can reverse the three crises of apocalypse: the extinction crisis; the toxics crisis; and the climate crisis? Sixteen ecologists, including me, think the answer to that last question is yes. We explain why in a recent ideas-driven paper. Our overall position is the title: “Protecting Half the Planet and Transforming Human Systems are Complementary Goals.”

The premise of the paper, published last month in Frontiers in Conservation Science, is that greatly expanded protections of wild things and wild places and major downsizing of humanity’s footprint are crucial to stabilize climate and stanch species losses (now estimated at a rate around 1,000 times historic norms).

The paper takes its title mainly from E. O. Wilson’s idea (and book of the same title), “Half-Earth.” Wilson argues that the continuity of complex life depends on protecting about half our planet’s surface from the likes of us — industrialized people. (Presently, around 15 percent of the Earth’s land surface and 5 percent of the ocean surface have various levels of protective designations, ranging from no-take protection to sustainable use.) Of course, protection can seem misanthropic. And so the idea has drawn many critics. The new paper seeks to answer the critics and advance the idea.

The paper explicitly propounds that increasingly used phrase, “Nature Needs Half.” Critics of this paper and its related literature believe it is more crucial to first ask what people need, how much of the world must be set aside for human endeavors and to fix human inequities.

Humans apart from ‘nature’ is impossible. Nature is everywhere — not just ‘preserved’ in parks.

And this gets me to the part of the paper that I’ve come to view as problematic. It’s about semantics. The phrase “nature needs half” derived as sort of a pop-marketing slogan from Wilson’s concept of “Half-Earth.” But “nature needs half” strongly implies a nature-versus-humans dichotomy. “Nature” itself is a problematic term, positioning humans as apart and opposed to nature, and implying that this dichotomy is factual. Plus, our culture has centuries of familiarity with the concept “Man against nature.” This is the paradigm humanity has pursued across much of the world, especially the Westernized world of today’s globalized economy. So talking about the needs of “nature” seems a perpetuation of the dualistic thinking that got us these ecological crises. “Nature needs half” seems to pit the concept of conserving life against what humans need. It seems an engraved invitation to criticism, helping polarize lovers of “nature” and people focused on social justice.

Humans apart from “nature” is impossible. Nature is everywhere — not just “preserved” in parks. Humans depend most fundamentally on natural processes. Even the term “the living world” misses the most basic fact that the world’s non-living waters, atmosphere, soils, weather and tectonics set the necessary stages within which life performs its dramas. So the rationale for a paper titled “Protecting Half the Planet and Transforming Human Systems Are Complementary Goals” is to correct a misunderstanding. As the paper notes, “protecting biodiversity and human well-being [are] goals that Nature Needs Half and its critics share.”

But a plan to protect half the world must face the fact that landscape conservation has some nasty history to atone for. There was a period when plans to protect natural areas entailed moving Indigenous people off their ancestral lands. Mainstream conservationists have only recently — it seems to me — come to the realization that conservation needs Indigenous peoples. More than one-third of remaining natural lands are Indigenous lands. With lives and identities at stake, Indigenous peoples remain their own strongest defenders. It behooves biological conservationists to become strong but sensitive partners in Indigenous survival. The authors of “Protecting Half the Planet…” explicitly affirm that “conservation policies must be designed and implemented in collaboration with Indigenous and local communities.”

A related point made by critics has been that protecting half the planet doesn’t solve human social and economic problems. But the Half Earth idea never meant to imply that “the other half” can be a Hades where humans and others continue being subject to exploitation, pollution, abuse and cruel confinements.

The post-1950 period has been called the “Great Acceleration.” By exponential growth and industrialization, humans have delivered civilization’s gravest ecological wounds and breached the threshold of dangerous climate disruption. “Protecting Half the Planet” therefore points to two parallel necessary paths: Expanding protected areas and downsizing the human enterprise. “Enlarging the scale of conservation and reducing the scale of human systems,” the paper audaciously asserts, “are complementary goals.” To be explicit, it advocates “deep transformations of human systems.” It argues, “Protecting half the Earth needs to be complemented by downscaling and reforming economic life, humanely and gradually reducing the global population, and changing food production and consumption … redefining humanity’s relationship with Earth.” What happens if we fail to undertake these enormous transformations in humanity’s prevailing worldview and playbook? “We instead accept,” the paper warns, “a chaotic and impoverished world that will be dangerous for us all.”

The consequences of upsizing and uncontrolled growth have long fallen disproportionately on the poor.

Growth has often been seen as synonymous with improvement, but the two are different things. Growth means making something larger by injecting more energy and material into it. Improvement means outcomes that are better for living things and human dignity. What most characterizes poverty is not a lack of material things but a lack of quality. Clean and healthy food, clean water, good education, better medical care, improved safety, full legal citizenship for women and strong communities that give people relationships and purpose — those lead to better outcomes, and in many cases, rapid growth has interfered or acted counter to those goals. People become poor when those with more exploit them to get even more. This seems the root of injustice and of poverty.

Although the factual basis of the debate over protecting half the planet is scientific, values figure enormously here. Isn’t the world here for us to use? As arbitrary as it is to see humans as more valuable than the world, isn’t it equally arbitrary to view humans from a more relational moral perspective? The arguments flow back-and-forth along these lines. But there is one deciding non-arbitrary factor. Operating from a philosophical view that values humans above our earthly context is literally setting the world on fire, erasing tens of millions of years of evolved relationships and threatening the future. We are far enough along in that experiment. The argument from a more equable perspective of humankind’s place in life and time looks increasingly like the only hope. The authors of “Protecting Half the Planet” see climate breakdown and accelerating extinctions “merging into a single calamity imperiling all complex life.” The underlying value premise is quite simple: This is bad. It’s bad for all life and for the future prospects of human dignity and justice.

If you think that human dignity is good, you will agree that the predicted dislocation of tens of millions of people fleeing depleted farmlands, floods and fires is bad. You’ll think it’s bad that an estimated 200 million people could be displaced by climate change by 2050. You probably already think it somewhere between unfortunate, dispiriting and catastrophic that the mainstream public — and, most consequentially, the policymakers by whose actions or inaction we thrive or struggle — has failed to respond to forecasts and the obviously accelerating disasters.

“Protecting Half the Planet and Transforming Human Systems…” highlights two conclusions: talking about half of Earth tilts us toward the scale of action required by the escalating emergencies; and human systems must be downscaled and transformed. In other words, we cannot grow our way out of problems caused by growth. But we can shrink our way to survival and human dignity. The main problem is that we’ve delayed so long in tapping the brakes that we are coming close to hitting the wall at cruising speed.

The world population has tripled in my lifetime. The United Nations has estimated a median population of 10.9 billion people by 2100. Lowering human numbers can be achieved by — and perhaps only by — improving the care of girls and expanding the rights of women. Women in charge of their lives opt for smaller families. A reduction of 0.5 births below the fertility rate of the median scenario is well within reach of voluntary family planning. This simple and humane advance could end growth of the global human population and result in a projected 7.3 billion living people by 2100. This would have benefits for the world’s poor, the world’s women and the world’s children. If rich people have any secret to share here, it’s that smaller families and intentionally spaced births create larger lives. Women lacking rights, opportunities and access to good health care do not benefit by having large families; certainly their children do not benefit from growing up as smaller slices of an already impoverished pie. Small families create better cared-for children; everyone can benefit.

Critics of large-scale protection tend to see Earth as resources and public goods, with human beings valued above a planet subject to human ownership. The non-human world seldom gets a cameo in their arguments. Their distributive justice does not apply to non-humans. “Protecting Half…” argues that delivering justice is urgent for people and the non-human world. It invites its critics to see beyond the bias that only humans deserve moral consideration. It sees the world as relationships.

Philosophy and law have expanded the moral community, first from small groups of humans to all people as reflected in the United Nations’ 1948 Universal Declaration of Human Rights. Efforts at “personhood” (a legal term for a rights-bearing entity) for other-than-human animals — and for landscape features such as rivers — reflect the small but growing sense that humans exist within and because of a wider living community.

Protecting half remains possible. All continents retain extensive candidate areas under largely natural cover. Most taiga and tundra habitats of the North, and many South American, Central African and Southeast Asian rainforest habitats, remain relatively free of road systems. Canada, the United States and some other countries have hundreds of millions of hectares of government- and Indigenous-owned landscapes that can be protected from abuse. Equally important are small connective patches between protected lands through human-dominated areas.