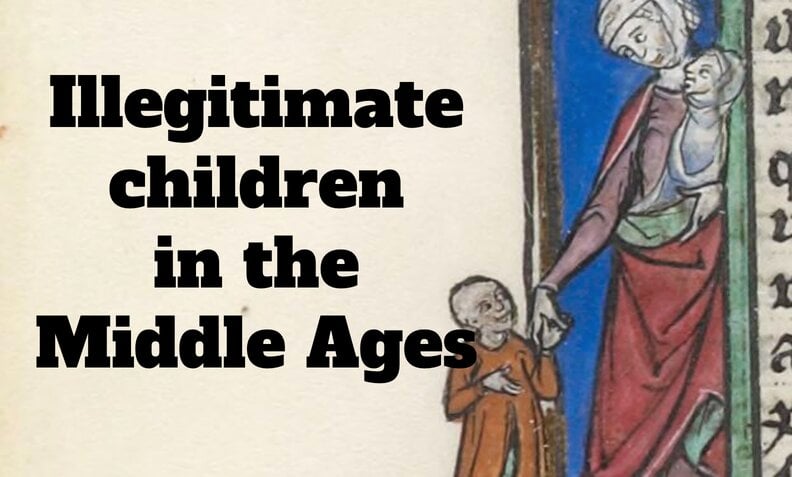 The stories of illegitimate children in the Middle Ages are often told through the lives of famous bastards, the daughters and sons of kings and noblemen, like William the Conqueror, born of Robert I, Duke of Normandy, and his mistress Herleva. But what do we know about the illegitimate children of common people?

During the early Middle Ages, being born out of wedlock was not much of an issue for the elite. Many early medieval kings – Charlemagne included – had concubines who mothered children that were fully part of the kings’ lineage. However, from the eleventh and twelfth centuries onwards, the Church implemented and enforced a series of laws aiming at framing and strengthening marriages. Marital regulations centred on what it meant for a marriage to be valid, severely repressed adultery and concubinage and limited the rights of illegitimate children. Bastards, for instance, could no longer become members of the secular clergy. Illegitimate children suffered legal restrictions limiting the scope of their ambitions and careers, not to mention that illegitimacy tainted their reputation – at least in the case of non-noble bastards.

The birth of an illegitimate child was even a significant burden for their mothers whose reputation was ruined. As we shall see in this article, some mothers abandoned their child, leaving the baby at the door of a church or a hospital, but others kept the baby and raised it. The baby’s father could officially recognize the parentage. But this did not make the illegitimate children legitimate. Acknowledgement of parentage simply created legal duties and responsibilities between the father and the child, as this article lays out.

Three times in a vineyard

From the fourteenth century onwards, the urban authorities of Montpellier helmed a charity dedicated to “exposed” children – abandoned and orphaned children and babies they entrusted to wetnurses and foster families for their upkeep. In the case of abandoned children, the consuls strived to identify the parents to return the babies to their care. A charter drafted to that effect on June 30, 1505, tells us the peculiar story of a baby girl, aged one or two months, who had come into their care. The consuls wanted to identify the baby’s parents.

According to rumours, the baby girl, named Jehanne, was born at the end of May. She “was said to be of Thomas Artault […]; the said Artault would have had her with the participation [sic] of Agnès Gilbaude who currently lives with Jehan Rondellet, a merchant of Montpellier.” Agnès likely worked as a servant at Rondellet’s house. The lord consuls had Agnès come to city hall. They spoke to her and inquired about the girl. Agnès confessed that “it was true and that the little girl was and belonged to the said Thomas Artault, who had participated [sic] three times carnally with her in a vineyard.” In other words, Agnès and Thomas had had sex three times in a vineyard, and pregnancy had ensued.

The consuls then asked Thomas to come to city hall, where Agnès and the lieutenant of the local court of justice were waiting. The consuls urged Thomas to financially support the baby girl before the story became the talk of the town, ruining his reputation and Agnès’. But Thomas denied being the baby’s father. If Agnès was distraught, she was also certain of Thomas’ involvement in the pregnancy. She offered to repeat her assertions under oath and on the relics of St. Anthony. The consuls therefore sent Thomas, Agnès and the lieutenant of the court of justice to the church of St. Anthony for Agnès to proceed to her pledge.

In the church, the priest stood, holding a book “in which was written Christ’s passion and the four Gospels” and on top of which he had placed the holy relics of St. Anthony – that is, the saint’s arm. Agnès repeated that Thomas was the baby’s father and swore it was true “in the hands of the priest”, on the holy book and the holy relics. This pledge seemed to have made a strong impression on the lieutenant, who then told the consuls what had happened in church. The consuls and the court lieutenant agreed that Thomas would support Jehanne’s expenses and would recognize her as his daughter, under the penalty of a jail sentence. In the region of Montpellier, fathers whose paternity was recognized or who freely acknowledged a child’s paternity were obligated to financially support their bastard child for three years.

Testamentary sources from Languedoc testify both to the abandonment of illegitimate children, as the above story illustrates, and to the raising of children by the mother and her family. Sources also show that the fathers of these bastard children sometimes acknowledged their paternity and went beyond the three years of upkeep that the Montpellier charter had made mandatory. Half-a-dozen wills show fathers making testamentary bequests to their illegitimate children, all boys or grown-up men. These fathers had no legitimate heir alive at the time of their will and most of them granted them generous bequests. The wills suggest that these fathers had fostered close relations with their illegitimate sons and behaved towards them as most fathers did towards their legitimate children.

In 1483 for instance, a nobleman from Montpellier left 100 golden écus and his upkeep to his bastard son Philippe. The father said that he made this donation so that his son could have an honest life and “upheld his rank.” Half a century before, a man named Anthony Bonet, a peasant from the village of Prades, gave all his goods to his underage and illegitimate son Guilhem under the condition that Guilhem takes care of his father and his father’s wife, whether sick or in health, until their death. These examples show fathers of illegitimate children undertaking traditional parental responsibilities in providing for the needs of their descendants. The case of Anthony Bonet and his bastard son also illustrates the reciprocal duties and responsibilities embedded with ties of filiation: children were expected to take care of their parents.

The son of an Abbot

One final example stresses that, once paternity was acknowledged, fathers could not shy away from their responsibilities. On May 10, 1414, a woman also named Agnès, the daughter of a deceased cobbler and the wife of another cobbler from Béziers, made a peculiar declaration under oath. She spoke in front of Johan Castanhier, abbot of Valmagne, a small Cistercian monastery near Montpellier, a notary and five witnesses. Agnès declared to the people present that “some time ago, before you, Johan Castanhier, were appointed abbot of Valmagne, I was talking to you and you knew me carnally and impregnated me with a child named Anthony”.

Agnès added that “in the presence of a notary and witnesses, I assert that Anthony, my son, is your son, that you engendered him and procreated him in me. This Anthony, my son, I give him to you and you shall do towards Anthony, your son, as any father is supposed to do towards his son”. The notary then wrote down Johan Castanhier’s words, who said, “I receive him as my son and I promise you, Anthony, my son, to do as any good father must and is supposed to do, and that, I promise you with my hand on my chest.” Johan Castanhier thereon acknowledged he was the child’s father and that he would take him under his care and would provide for his needs.

The fact that the child’s father was a cleric is not surprising. Medieval archives are plentiful with documents and stories about clergymen having affairs and fathering children. In medieval Spain, it was customary for clergymen to have concubines and children well integrated into the fabric of society. In medieval France or England, these indiscretions were also common – although not customary – and much more repressed. The case of Agnès, Johan the Abbot and the little Anthony does not tell if Johan would suffer the consequences of his actions career-wise. What is clear, however, is that the clergyman was ready to assume his parental responsibilities.

If many illegitimate children were abandoned by their parents, it was always the case. Women who could and wanted to keep their children were able to do so. In some cases, the baby’s father would get involved, at least financially, in their bastard’s maintenance and upkeep. It seems, from testamentary documents, that men were more inclined to acknowledge their fatherhood if they were deprived of legitimate heirs.

And a special thanks to my friend Lucie Galano who found, photographed and did the paleography of the vineyard affair document from 1505. You’re the best <3