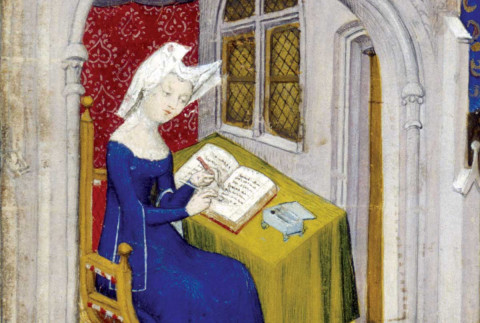 Christine de Pizan is known as a pioneering woman writer, one of the earliest feminist authors, whose poetry rang out loudly in 15th-century France and continues to echo across the centuries. In The Second Sex, Simone de Beauvoir described her as the first ‘woman to take up her pen in defence of her sex’. Born in Venice in 1364, the daughter of a distinguished Italian scholar, she moved with her family when she was still an infant to the court of Charles V in Paris. At 15 she was married to a trained notary and royal secretary who died of pestilence ten years later, leaving her with three children. Sometime afterwards she turned her hand to literary composition. Her best known works today are The Book of the City of Ladies, a defence against misogyny, and The Book of the Three Virtues, an education manual for women. In total she wrote around 30 major works on a range of topics from morality to chivalry and warfare. More than 200 manuscripts of her work survive, some in her own hand.

In this engaging and lively study, Charlotte Cooper-Davis sees de Pizan as an ‘entrepreneur’, a widow who turned to writing to support her family and maintain its status following the deaths of her father and husband, and who involved herself not only in the composition but also the production and circulation of her works. Cooper-Davis begins her study by looking at Paris. With the help of a map of the medieval city, the reader can imagine the places that would have been familiar to de Pizan. Locating her artistry within the context of the Parisian book trade, this work examines the compelling evidence that de Pizan had her own professionally staffed workshop or scriptorium. More broadly, the book looks at the influence of de Pizan’s extensive reading on her own defences of women, shaped as they were by the negative representations she found in the work of Ovid and Boccaccio and as a direct response to the misogyny of the Roman de la Rose.

Christine de Pizan: Life, Work, Legacy charts de Pizan’s descent into near oblivion after the end of the Middle Ages and her resurrection in the 20th and 21st centuries. This is the most innovative part of Cooper-Davis’ study; she offers perceptive analyses of works such as Judy Chicago’s 1979 feminist installation The Dinner Party, in which de Pizan is allocated one of the place settings. Both de Pizan and Chicago appear in Marsha Pippenger’s 2007 series of collages, Dinner in the City. The author is right to conclude that ‘few medieval writers have infiltrated the popular imagination of successive generations in the way that Christine has done’.

Not all readers will agree with Cooper-Davis’ celebration of de Pizan’s career and legacy. In the 1980s the Marxist medieval scholar Sheila Delaney wrote the influential essay ‘“Mothers To Think Back Through”: Who are They?’ in which she critiqued attempts to reify de Pizan’s reputation as a feminist foremother which overlook her privilege and conservatism. Delaney had a point. Cooper-Davis defends de Pizan against these charges, if not entirely convincingly, and then largely sidesteps the issue by referring to her writing as ‘pro-feminine’ rather than feminist. Nevertheless, it is certainly reasonable to locate de Pizan on what we might call a feminist continuum that spans centuries.

In her conclusion, Cooper-Davis discusses the US National Women’s History Museum’s Christine de Pizan Honors Galas of 2011 and 2012. Recipients included Annie Leibovitz, Maya Angelou and the Republican senator Elizabeth Dole. Perhaps, almost 600 years after her death, we can best judge Christine de Pizan by the company she keeps today.

Diane Watt is a writer and a literary historian.