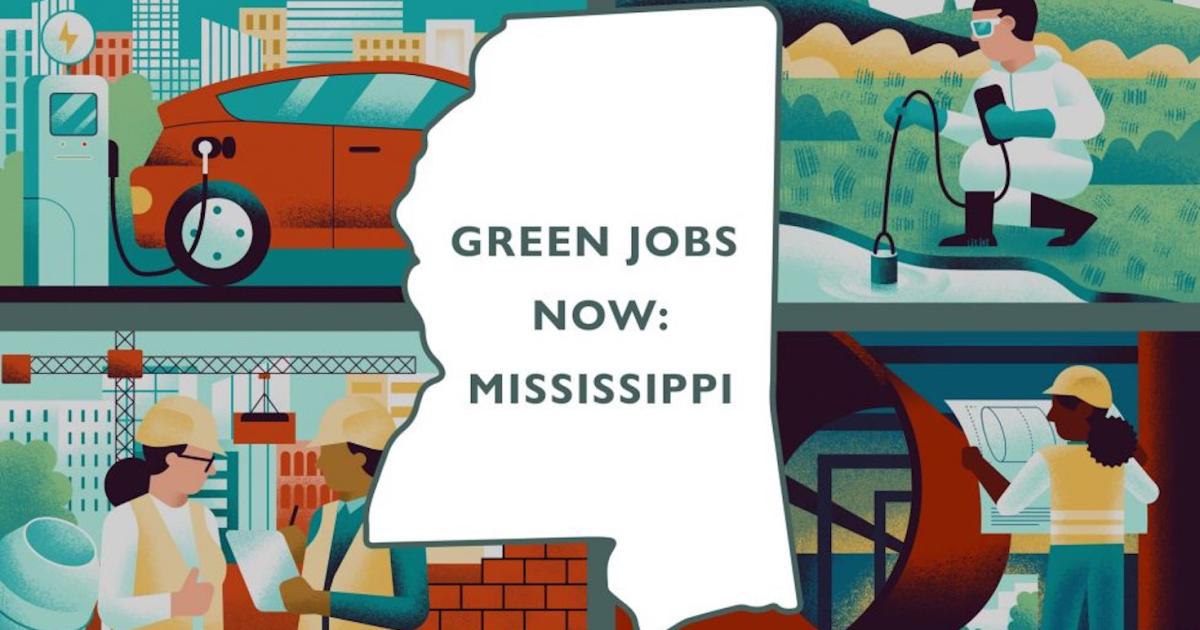 WorkingNation’s Green Jobs Now series is looking at green jobs opportunities and the skills needed to get those jobs across the country with a series of state-by-state reports and is republished with permission. This week: Mississippi.

Greenville, Mississippi, is the self-proclaimed “heart and soul of the Delta,” a motto reflecting its rich economic and cultural history as the state’s largest Mississippi River port city and the birthplace of many blues musicians. The city’s economy is built on shipping, cotton farming, fishing, chemical and clothing manufacturing and tourism.

The Mississippi River itself is a vital economic engine flowing more than 2,300 miles through 10 states, from Minnesota to the north through Louisiana to the south. It’s an important transportation route for cargo, generates more than $400 billion in sales and services annually — including 40 percent of the nation’s agriculture — and supports more than 1.3 million jobs. It is a water source for more than 50 communities.

It is also a river in crisis.

This year, the Mississippi was ranked No. 6 on the annual list of most endangered rivers in America.

“The climate crisis and unsustainable development are compounding the threats facing Mississippi River communities. Changes in precipitation are exacerbating flooding — carrying more pollution from farm fertilizers, sediment, and other pollutants off the land and into the river,” according to the report. “These factors impact public safety, drinking water quality, and the vitality of local economies.”

Mayors up and down the river agree and are sounding the alarm. They say the risks to their communities, the environment and their livelihoods are real. And they say there are opportunities to create green jobs that will mitigate those risks.

Since 2005, natural disasters such as Hurricane Katrina, Hurricane Ida and multiple years of massive flooding have caused more than $210 billion in damages to communities along the river, according to Simmons.

“What happens at the upper river happens in the lower river and the flooding that we see gets worse as it goes down the river. We see two high water events a year in my city,” he said.

“Facts don’t lie. Climate change is causing extreme weather events and the state is very vulnerable, especially coastal areas. The Mississippi River Basin is one of the most environmentally degraded landscapes in the country, if not the world, because of so much deforestation and paving over, so the water has nowhere to go,” she told WorkingNation.

Simmons said this climate crisis is creating a demand for green jobs in urban infrastructure, ports and waterways, and the agriculture industry, as well as in manufacturing, which contributes carbon to climate change.

Green job creation is slow now, he said, but it is poised to explode.

“They’re coming down the line. They exist somewhat, but the bipartisan infrastructure law is providing millions and billions of dollars for clean jobs, green jobs, and has a focus on climate resilience and creating more equitable and sustainable communities. I think you’re gonna start seeing a ripple effect.”

Green workforce is moderate and growing

Our new Green Jobs Now: Mississippi report, prepared for WorkingNation by labor market research firm Emsi BurningGlass, agrees that the number of green jobs in the state is about to climb, but not as significantly as in the country as a whole.

“Mississippi’s green workforce is moderate and growing,” according to the report. “We estimate that there are over 6,249 workers in Mississippi’s green economy. We project that in the next five years, employment demand for green jobs will increase by 3.5 percent, below the national average of 5.7 percent.”

The slow pace of green job growth is evident in new postings for green jobs last year — fewer than 1,000. The strongest demand was for jobs we identify as “green enabled.” These are workers in roles that are not considered green by default, but who are required to have at least one green skill or competency. The report adds that “workers with green skills are spreading across a wide range of industries such as utilities, manufacturing, and professional services —illustrating the increasing need for green skills across Mississippi’s economy.”

In particular, skills related to energy efficiency, renewable energy, and other green specializations are in demand, and offer significant salary bumps: In many of these roles, green skills offer significant average annual salary boosts of $2,000 or more, with some roles commanding a boost upwards of $5,000.”

Protecting human health and the environment

“We have really good air quality across the state. The issues that we deal with the most are wastewater and solid waste issues,” said Chris Wells, executive director of the Mississippi Department of Environmental Quality (MDEQ).

The state agency’s mission is to “safeguard the health, safety, and welfare of present and future generations of Mississippians by conserving and improving our environment and fostering wise economic growth through focused research and responsible regulation.”

“We don’t consider those two to be mutually exclusive in the state of Mississippi — we’re here to protect human health and the environment,” explains Wells.

It’s a big mission and it takes a lot of people with many skills to accomplish it.

The agency has always had a highly educated staff of licensed engineers, geologists and environmental natural resource specialists — what used to be classified in the state as environmental scientists.

“I never cease to be amazed by the quality of people that we’re able to recruit. Retention is where we have a problem,” he added, “particularly when it comes to retaining environmental scientists.”

To address the retention problem, the state recently expanded the list of undergraduate disciplines that qualify for the role to help broaden the applicant pool.

It is also a river in crisis. The Mississippi was ranked number six on the annual list of most endangered rivers in America.

“We want to make sure we’re taking advantage of all the people that might be out there in terms of knowledge and expertise. If it has any sort of natural resource, chemistry or biology (expertise), we want to give ourselves an opportunity to talk with those people and maybe recruit them.”

The state of Mississippi also upped the salary for the job significantly.

“We did some salary survey work in the state, surrounding states, and private sector and came up with a market rate — a minimum — and new pay scales. The idea was to try to get salaries more competitive because there had been constant turnover in the environmental scientist ranks,” said Wells.

Until recently, the starting salary for what was then called an environmental scientist was about $27,000 a year. Now, according to salary.com, the pay for the environmental natural resource specialist in Mississippi is between $48,988 and $65,299.

Wells is both an engineer and a lawyer and said his department is made up of workers from many fields, including accounting, IT and communications. “Those are the kinds of support jobs that may not be in the trenches in terms of writing permits or enforcing permits, but provide the administrative support and tools that our technical staff have to have to do their jobs.”

He tells me they all have something in common. “One of the questions I always ask in a job interview is, ‘What interested you in this job?’ And it’s not uncommon to hear, ‘I looked at your mission statement and I’m an outdoors person. I like to hunt and fish on the weekend, or I like to be out on the boat on the weekend with my family.’”

Wells adds it all comes down to “being able to come to work at a place where you feel like you’re doing your little part, whatever that might be, in a bigger scheme that protects human health and the environment.”

The Mississippi River Cities and Towns Initiative is trying to generate investment in redeveloping the natural infrastructure of the Basin, reforestation, and returning wetlands to their natural state.

Simmons said the infrastructure bill will have a tremendous impact on his city of Greenville. “We worked with the EPA’s office of sustainability some years ago to talk about creating a green infrastructure around our new $40.1 million state-of-the-art courthouse and green space.”

Simmons added, “They developed these visioning documents along the courthouse corridor that has bioswales and other types of conservation elements that absorb water, that help enhance the environment. You’re going to see jobs picking up in our community regarding green infrastructure.”

“You can create a more secure river in regards to water and food supply, but you also can create a better water quality and sequester some of this carbon in creating green jobs on the Mississippi River.”

Simmons acknowledges that not every community embraces the idea of creating green jobs the way Greenville has. He calls on other city and state leaders in Mississippi to look at the benefits regarding quality of life and reject the politics or the polarization regarding climate change or green jobs.

Preparing businesses and the workforce for what lies ahead

The Green Jobs Now: Mississippi report forecasts that green job growth in the state will be slow over the next five years. There is the potential for that growth to speed up in the coming months and employers should start planning now.

There are 416,810 workers in Mississippi who could be reskilled into green jobs, according to the analysis of the labor market by Emsi BurningGlass. “Examining occupations that are similar to core green jobs, which we would categorize as potential green jobs, we can identify the workers who are likely able to be upskilled at a lower cost, and on a shorter time horizon, for employment in a green job.”

“Nearly a third of the entire Mississippi workforce, in potential green jobs — suggesting a vast and diverse pool of easily reskillable talent,” the report suggests.

A lot of those workers are in lower-wage jobs such as cashier, retail worker or warehouse worker.

The report recommends that businesses identify the jobs across their organizations and industry that are most likely to be impacted by emerging green technologies and trends, and where within their operation they can make the most meaningful gains on energy purchase, energy and water efficiency, materials usage and transportation efficiency.

The report adds that businesses should “then determine what are the most important emerging and high-value skills your workforce will need to achieve those efficiencies that you can help them develop with targeted, high-return-on-investment training.” The answer to the question of what will drive more businesses to the green economy and in the process create new green jobs may be simple economics — for workers and, soon, for businesses.

Mississippi is one of the poorest states in the country, with one in five people living in poverty. Our report finds that, on average, a green job in Mississippi pays $57,097 compared to the average of all jobs, which is $40,701.

DiPerna said, “For the state not to more proactively embrace the green economy is to deny Mississippi workers the potential salary premiums that the Emsi BurningGlass report projects.”

She points out that the decision to make their businesses greener may eventually be taken out of the hands of some of the larger companies.

“Investors want companies such as Entergy Mississippi to recognize environmental risks as financial and operational risks, and the SEC (Securities and Exchange Commission) has just issued a draft rule that would require publicly-traded companies to disclose such risks to their shareholders,” explains DiPerna.

The proposal released in March calls for companies to be transparent about such things as the impact of climate-related events (severe weather events and other natural conditions) on the company’s financial health; publicly set climate-related targets and goals; and information about its direct greenhouse gas (GHG) emissions and indirect emissions from purchased electricity and other forms of energy.

A final ruling on the proposal could come later this summer.