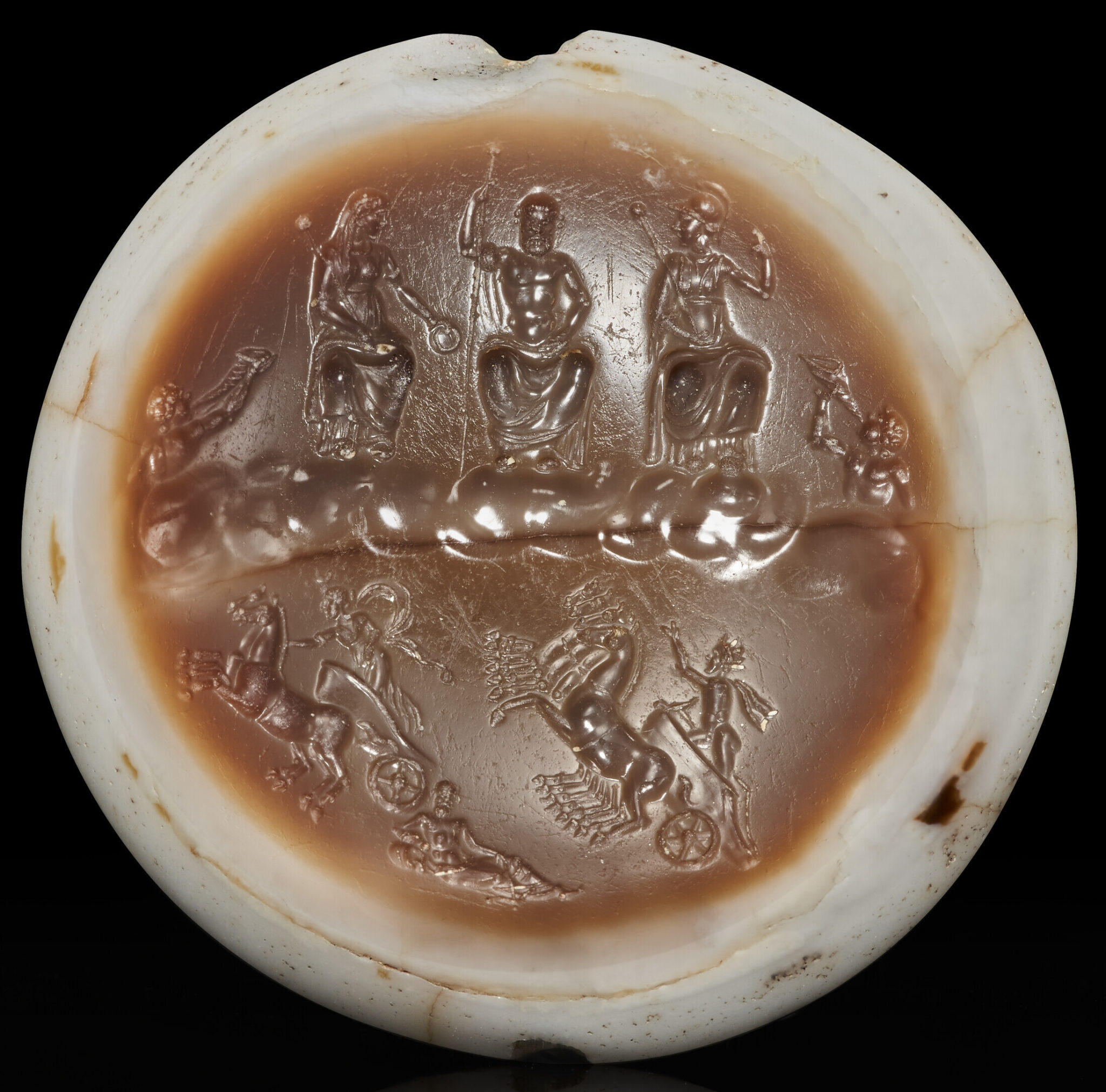 The ancient carved gemstone collection of Roman art dealer Giorgio Sangiorgi had so deep a bench that Christie’s is now on the third auction dedicated to his impeccably curated miniature masterpieces. There are 48 Greek, Roman and Etruscan intaglio gems crafted between 1700 B.C. and the 3rd century A.D. on offer in this third and final auction.

Giorgio Sangiorgi had an art gallery in the Palazzo Borghese on tony Via Ripetta in Rome. Founded by his father Giuseppe in 1890, the gallery specialized in European art and antiquities. It also ran auctions and exhibitions, so father and son had close business connections with all the major museums, institutions and private collectors. Giorgio developed a special interest in ancient glass and gems. He became an avid collector, keeping the greatest pieces he could get his hands on and publishing numerous scholarly articles on the subject. (Interestingly, he never published his own collection. Nobody outside the family even knew this treasure existed until 2018.)

In the late 1930s, Giorgio Sangiorgi saw the writing on the wall and decided to get his precious collection to safety before Italy was mired in war. He moved it to Switzerland for its protection. Sangiorgi died in 1965 and his collection remained in the family until the first part of it appeared at auction in 2019. The collection was sold in parts to ensure the market wasn’t glutted and so that the most spectacular stones didn’t overshadow the ones of lower appraised value.

The auction is currently open online and closes on April 14th. The catalogue is a wonderful browse, and every one of the miniature masterpieces is worth exploring zoomed-in to see all the fine details.

Speaking of fine details, this 1st century A.D. Roman circular ringstone in banded sardonyx has to have the most minute carving I’ve ever seen. It is barely over an inch in diameter, smaller than a half dollar coin, and a good part of that is the uncarved white band that frames the chocolate brown center. On that carved surface of maaaybe 7/8ths of an inch are eight deities, six horses and two chariots. Oh, and a row of fluffy clouds. 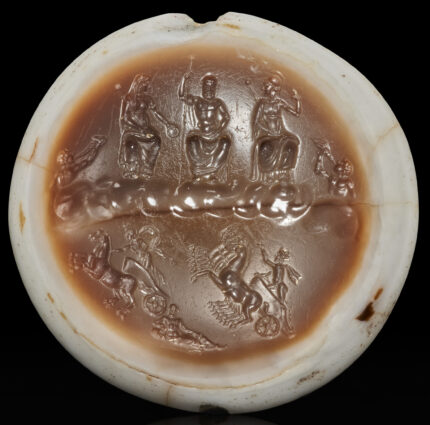 The row of clouds divide the hemispheres of the carves surface. Above it are the Capitoline Triad — Juno, Jupiter and Minerva — enthroned. Jupiter sits in the center holding a tall scepter in the right hand. Minerva, wearing a helmet seated at Jupiter’s left, holds a shorter scepter in her lap. Juna to Jupiter’s right does as well. She also holds a phiale Emerging from the very end of the clouds are two wind deities blowing shell trumpets. Under the clouds are the moon goddess Selene driving a biga (two-horse chariot) followed by the sun god Sol driving his quadriga (four-horse chariot). Below them is Oceanus, reclining languorously on a toppled vase.

So how big could that quadriga with its four overlapping horses and realistic articulated, possibly be? Maybe a quarter inch? How tiny were the blades the engraver used to carve those horses’ legs? Intaglio carving is always mind-blowingly tiny, but these figures are by the far the tiniest I’ve encountered. The pre-sale estimate for this piece is a modest $15,000-$20,000.

I’m going to put another amazing gemstone on offer behind the jump because it’s an explicit scene of a satyr copulating with a donkey and most definitely NSFW. It is not, I repeat, NOT short on the phalluses. Pun very much intended. 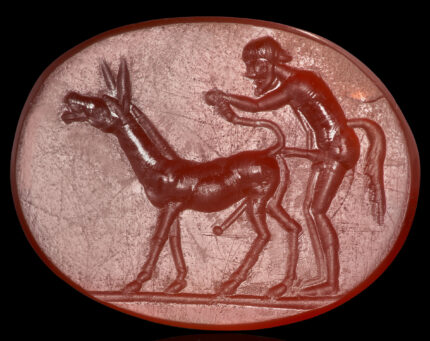