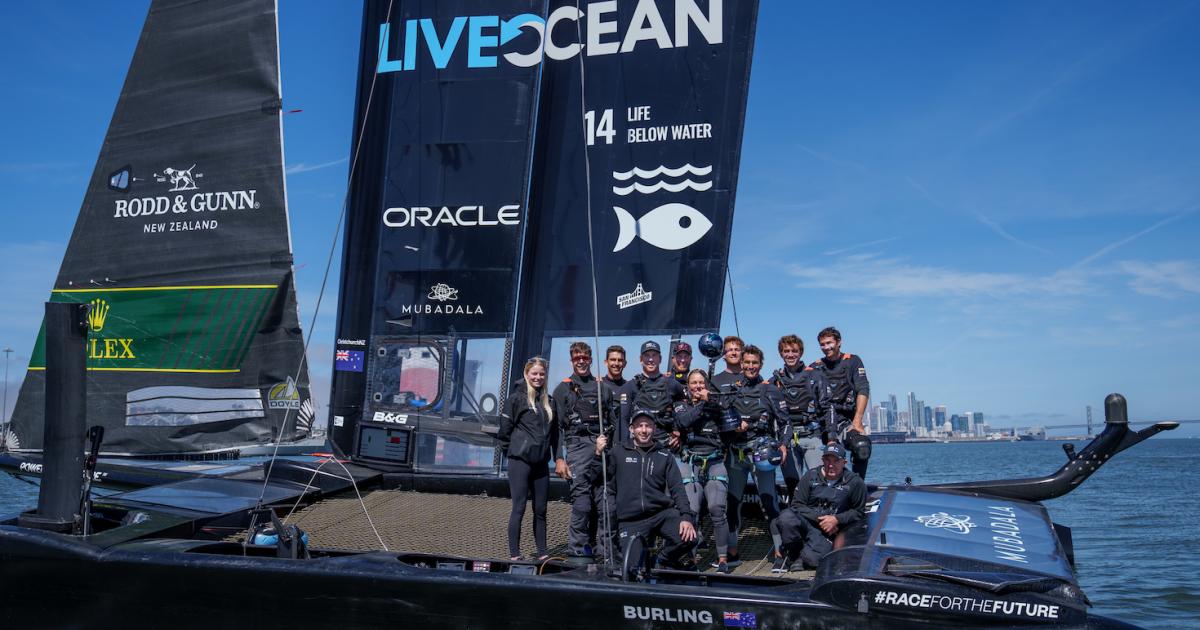 Last weekend, the San Francisco Bay hosted the Formula One of boating, the Sail Grand Prix co-founded by Oracle’s Larry Ellison. Fifty-foot catamarans raced across the bay to end the organization’s second season, with Australia winning the final on Sunday. The league is part of an effort to increase awareness of sailing as a sport and this is only its second season, but it’s the only major global sailing event outside of the America’s Cup.

Australia wasn’t the only winner crowned Sunday. The New Zealand team came first in SailGP’s Impact League, a second competition focused on each team’s sustainability efforts and carbon footprint at the season’s events. As part of this contest, each team is partnered with a purpose partner nonprofit including Wave of Change, Energy Observer Foundation, STEM Crew and A Plastic Planet, with which they work on projects throughout the season and during the race events. New Zealand’s project partner Live Ocean was awarded $100,000 for the win.

The teams track their food waste, water usage, travel emissions and overall carbon footprint for each of seven events that make up the season and get audited by the third party Simply Sustainable to earn points.

Many teams, including the winner New Zealand, moved towards plant-based diets during the events, separating waste into compost and recycling; added vinegar to their boat-rinsing regimes to cut down on water usage; and even made small changes to how equipment is secured, such as moving away from single use zip ties. The teams also partnered with a New Zealand-based Future Post to transform scrap plastic from the boats into fence posts instead of throwing them away.

“We wanted to make sure it was fair, accountable, measurable,” said Fiona Morgan, director of purpose and impact for SailGP. “And so that was for it to be externally audited. But moving forward we need to make it more efficient. At the moment, it takes one day per team per race to audit the Impact League, so a full eight audit days, every race.”

While SailGP is empowering its competitors to make small changes to their everyday processes for sustainability, it also has its own targets and is bringing sustainability into each aspect of the event.

By 2025, SailGP has committed to be “powered by nature both on-water and on-shore at our events” with a 55 percent reduction in carbon emissions. SailGP is also reporting to CDP and will get its score this summer. It will become the first sport to do so, according to Morgan.

Along with the race events, SailGP hosted a sustainability presentation Friday for sponsors of the event called Champions for Change. The session featured interviews with sponsors of the event including Oracle Chief Sustainability Officer Jon Chorely and Simon Fischweicher, head of corporations and supply chains for CDP North America. There was also a demonstration from the NGOs including the Energy Observer Foundation, a nonprofit led by former sailors that explores hydrogen energy solutions for on-water power.

Behind the scenes, SailGP has moved to completely remote broadcasting, and according to CEO Russell Coutts, it was the first sport to come to live TV this way. The move cuts down on the amount of equipment shipped around the world to events, which are in locations including Bermuda, Italy, Great Britain, Denmark, France, Spain and Australia.

“One container has replaced 28,” said Warren Jones, chief technology officer for SailGP. “And we don’t have 100 people traveling to every event. They stay back in London, They’re using the same equipment, and doing exactly the same thing, because of [Oracle’s] cloud to cloud services.”

According to Jones, the data centers used for the broadcast run on 100 percent renewable energy. SailGP is also going climate-neutral for the championship by offsetting its carbon footprint with its partner One Carbon World, funding mangroves in Myanmar and contributing to Climate Neutral Now, a portfolio of United Nations wind and hydro projects.

When you’re creating this technology anyway, you might as well align it with a purpose to hopefully do some good.

Sailing harnesses nature’s wind and water power with innovative technology. Coutts believes many innovations created for the sport can be applied to other sectors. One department of the organization, SailGP Technologies, combines its expertise in sailing with partners in technological advancements. Together they are investing in electric boat innovation, a space that is slightly behind the quickly growing electric vehicle space.

While the boats in the race are sail boats moved by wind, the spectator, chase, safety and media boats that go along with events such as these are traditional fossil fuel guzzlers that need to be replaced to make the sport greener. Self-piloted, solar-powered buoys that mark the race course supplied by MarkSetBot have removed the need for an additional boat to drive to and from the buoys to set them up and move them as the winds change. The race boats are equipped with dozens of sensors that record everything from the wind speed and drag due to current to the angle of a tact. The teams use that data to dial in wins but SailGP technologies is looking into using them for an innovative shipping solution that generates energy from waves similar to a wind turbine.

“When you’re creating this technology anyway, you might as well align it with a purpose to hopefully do some good,” Coutts said.