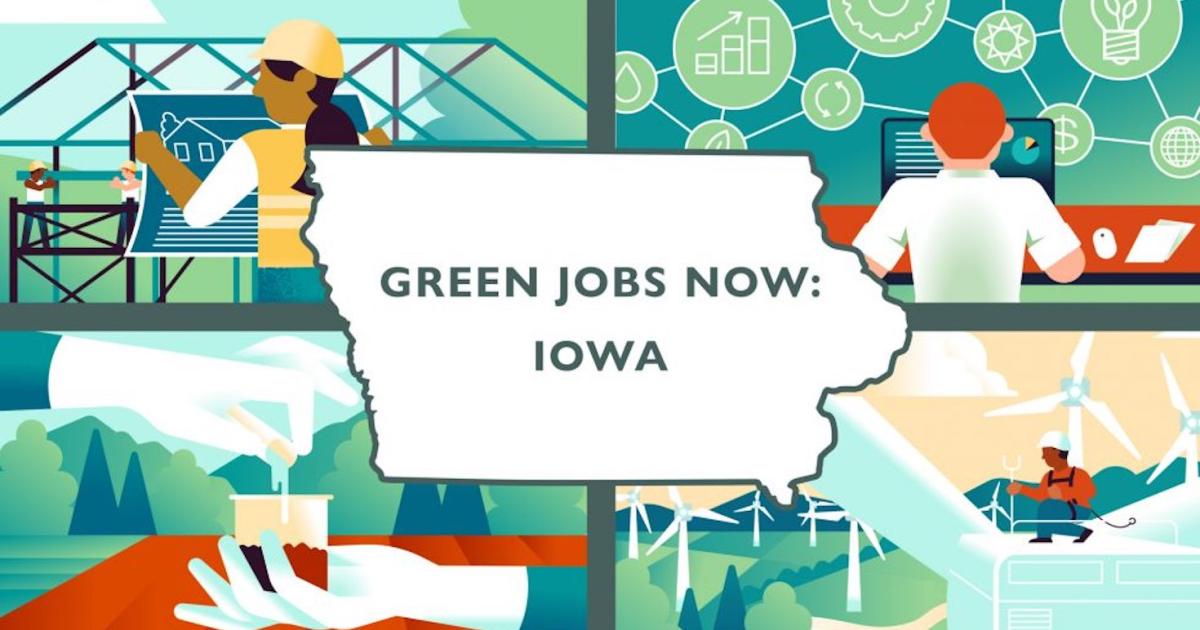 WorkingNation’s Green Jobs Now series is looking at green jobs opportunities and the skills needed to get those jobs across the country with a series of state-by-state reports and is republished with permission. This week: Iowa.

“Climate change isn’t going away,” said Charlie Wishman, president of the Iowa Federation of Labor, AFL-CIO. Throughout the Hawkeye State, stakeholders including those in labor, green organizations, government, education and agriculture are addressing the issue.

According to Green Jobs Now: Iowa — a WorkingNation and Emsi Burning Glass analysis of the green labor market in the state — the forecast indicates a significant increase in green jobs.

“If there’s going to be a big transition to a green economy, it’s better to be at the table than to be on the menu,” said Wishman.

“Over the years, there have been various discussions between labor unions, labor groups, labor advocates, as well as green advocates and environmental organizations. We really do need to have these conversations with each other.”

“Iowa has a greater share of wind energy jobs per capita than any other state in the nation,” pointed out Mak Heddens, senior adviser, Power Up Iowa. “A single wind energy project can create up to 200 construction jobs and then 10 permanent jobs. If you’re looking at a very rural small town in Iowa, 10 permanent jobs is great.” Townsend said it’s not just wind in her state. “Ethanol also is one of the bigger contributors to our green economy. That’s been a significant use of corn in the state of Iowa. We’re big producers of ethanol so that’s going to play a huge part in the economy moving forward.”

In addition to energy, Townsend said the state is actively focusing on water. “We’ve also put a significant amount of money into things we can do to protect our water and make sure that we are practicing good water conservation.”

The state is allocating $75 million towards the Water Infrastructure Fund with monies coming from American Rescue Plan Act (ARPA) dollars. An additional $25 million is going to the Conservation Infrastructure Project at the Iowa Department of Agriculture and Land Stewardship.

“It’s a little bit hard to count because not all the green energy jobs have their own standard occupational codes,” explains Townsend. “This is an industry that we expect to continue to grow in Iowa because of the amount of electricity we’re producing.”

She pointed out, “It’s not just jobs that work directly on wind turbines or manufacturing of wind turbines. It’s also indirect support of those industries, as well. That could include anything from IT to human resources to supply chain links.”

Heddens added to that. “Think about companies like Amazon, Facebook, Microsoft, Apple — all of those companies have been investing and locating in Iowa due in part to the state’s clean energy leadership. When they come, they’re creating, say, a major data center that employs X amount of people. So that’s bringing more jobs due to that leadership.

“I think that’s a big miss that some people don’t think about or don’t realize. The more renewable energy that Iowa has in its power mix, the more attractive it becomes for some of those companies that prioritize sustainability in their operations.”

“The uptick in green job demand in 2021 as compared to previous years in Iowa is an indication that the green economy in the state is strengthening,” according to Green Jobs Now: Iowa. “Workers with green skills are also spreading across a wide range of industries — such as utilities, manufacturing and professional services — illustrating the increasing need for green skills across Iowa’s economy.”

Findings estimate there are over 13,118 workers in Iowa’s green economy. The report projects in the next five years, employment for green jobs in the state will increase by 18.8 percent — well above national average of 5.7 percent.

We look at four categories when we break down the opportunities in the green jobs ecosystem.

Not to be confused with enabled jobs, enabling jobs “aren’t associated with green tech per se, but they support the green economy.”

Findings indicate demand for workers across Iowa with the greatest concentration split between the Des Moines-West Des Moines metro area and Ames.

The report found just under 600,000 workers in Iowa who, with new skills, could be green workers. “These workers come from a variety of different occupations and educational backgrounds and reskilling them could build the pipeline of green workers faster than relying on new postsecondary graduates alone. However, doing so will require a mix of training program formats that support the reskilling and redeployment of these workers.”

The most in-demand skills related to the green economy in Iowa include renewable energy, energy conservation and energy efficiency.

I have a lot of sympathy for young folks who want to go into this space. You go through the Green Iowa AmeriCorps program. You really like that. You’ve been trained in local government and sustainability. Then where do you go?

Regarding learning new skills, Wishman said, “[For] the jobs that may be going away for whatever reason out of the workers’ control, make sure that they have the ability to either retrain or find work that’s as seamless as possible.”

“Saying to somebody who has worked their whole life in a coal plant, ‘You’re 55. Why don’t you go to community college and learn coding?’ — that’s not a realistic answer for a lot of people.” Wishman also pointed out the need for greater access to career opportunities for women and historically underrepresented people of color.

According to the data, the average green jobs salary in Iowa is $56,320.

Green Pathways and an early introduction to young people

“We’re trying to talk to young students. Anything we can do to get them interested in the opportunities in the state of Iowa. Because just like every other state, we want to keep our people here,” said Townsend.

“I think the question is, ‘How do we attract workers and keep workers and families here?’” asked Brian Campbell, executive director, Iowa Environmental Council. “As exciting as it is to say, ‘Here are these growth sectors,’ we’re trying to figure out how do we get the people to work in those fields — which is a different challenge in some ways.”

Water Rocks! focuses on K-12 students, primarily in third through seventh grade. “That’s when you can actually have the biggest impact on shaping what they think and creating that love for the environment,” said Jacqueline Comito, the program’s executive director, as well as program director of Iowa Learning Farms at Iowa State University.

Said Comito, “We have four different lessons that we teach. They’re all obviously on environmental issues. One is specifically on soil, another one on wetlands, another on watersheds, and a fourth one is on pollinators and the importance of our bees.

“We make a point of saying to the young people, ‘You can be a part of the solution. You can do jobs. You can actually shape the future by what you decide to do with your life.’ I feel like the more we increase our awareness about environmental issues and the change that needs to happen, the jobs are going to get there. Then the people are going to go to the jobs.”

Meanwhile, an energy provider is providing an opportunity for high school students. “We were looking at a pathway to get the students into the programs, juniors and seniors,” said Lori Wildman, training specialist, Alliant Energy. “Those that complete have the opportunity to have paid summer internships.”

“It’s a very competitive market in energy and technical careers. We need those candidates. We wanted to give high school students an overview and an insider’s look at what these energy careers are like,” notes Wildman, adding it also helps identifies early talent.

Tamara Marcus, sustainability program manager for Linn County, is the first person to occupy her position. “We are one of two counties in the state that have this position. With a community that’s experienced three natural disasters in the last 12 years that are arguably climate driven, I think it is a really important position for the county and, hopefully, for the state.” In December 2021 and August 2020, Iowa experienced derechos — described by NOAA as “a widespread, long-lived windstorm that is associated with a band of rapidly moving showers or thunderstorms.”

She noted, “We need to capacity-build and empower young folks, different folks to be able to occupy these spaces and do this work.

“Part of how we do that at Linn County is with our Green Iowa AmeriCorps program. We have two to four generally young folks, but honestly, anyone who’s interested, work with our departments, work with our Board of Supervisors to understand how to do sustainability in government work.”

Marcus said much more needs to be done to provide people with actual green jobs. “I have a lot of sympathy for young folks who want to go into this space. You go through the Green Iowa AmeriCorps program. You really like that. You’ve been trained in local government and sustainability. Then where do you go? I’m a department of one full-time staff.”

“I’ve always tried to find what’s the best use of the land we have. I think that’s something we all have to keep in mind is that our land is supposed to be very diverse,” said Seth Watkins, owner of Pinhook Farm near Clarinda in the southwestern part of the state.

He is a fourth-generation farmer who raises cattle and grows a variety of crops in rotation and also a member of Iowa Learning Farms.

“One of the things I talk to people a lot about sustainability is it’s a journey of continuous improvement,” said Watkins. “We’re always looking at, ‘What else could I do? How could I diversify this farm? Can I plant certain trees? Can I add different animals?’ There are options out there. It’s just making it profitable is one of the challenges at the same time.”

Watkins, who makes his farm available to college interns, said, “Ecological services, I think, is something that’s real low hanging fruit for farmers. I think it’s an area that we’re going to grow more jobs out of.”

With the state actively building wetlands, he notes, “A wetland is a natural filter. Catching the water that comes out the cropland, capturing the nutrients, holding them in place, keeping them out of our streams, out of our rivers. So, we got cleaner water for our municipalities. For younger folks, there are going to be jobs created. Someone’s got to design these, build these, put them in place, make sure that they’re maintained so there’s accountability.”

Koether, senior farm viability manager for Practical Farmers of Iowa, continues, “Many [want to] do something that is more focused working on biodiversity, working on climate, creating positive externalities rather than negative ones.”

Regarding the environment and its impact on jobs, Watkins of Pinhook Farm said, “We’re doing better than we were 10 years ago, but we’ve got to significantly step up the pace if we’re going to have a good future for the next generation. The best way I’ve always heard it, ‘Nature will survive, but it’s up to us if we want to be here with her.’”

Campbell of the Iowa Environmental Council said, “There’s a generation that is passionate about this, that wants to make a difference. If we can figure out how to empower them and give them those opportunities, I think our future depends on that.”

Wishman of the Iowa Federation of Labor, AFL-CIO said collaboration is crucial going forward: “When it comes to these projects, we need to make sure that we’re at the table and that our partners who are our friends on most things — we’re all singing from the same songbook.”

WorkingNation producer Deidra White contributed to the reporting for this article.