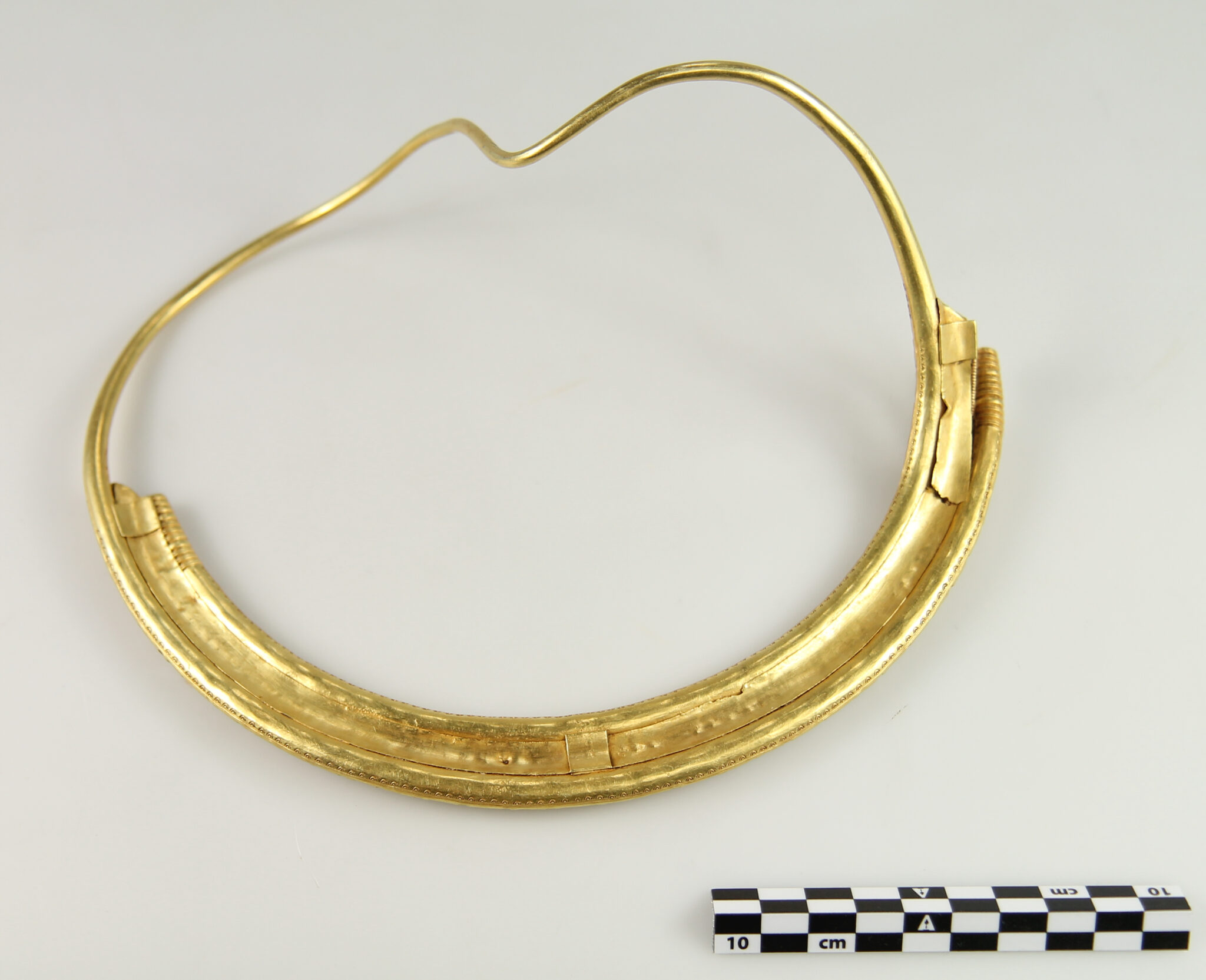 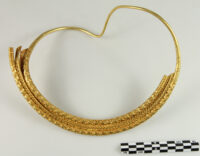 A one-of-a-kind gold neck ring from the Germanic Iron Age (400-550 A.D.) has been discovered near Ilsted in southern Denmark. The necklace is heavy at 446 grams, a fraction under a pound, and is eight inches wide at the widest point. It is made of one long rod-shaped piece of gold folded over itself at the terminals to create a ring shape. The ends overlap about 1/3rd of the length of the necklace, and a gold plate is soldered to the back of the two rings to create a third canvas for decoration between the two rings. 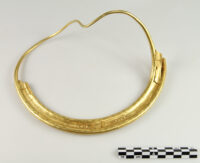 The overlapping ends of the rod are decorated with crescent-shaped depression  stamped into the gold. The decoration is so meticulously detailed that the crescent shapes on the two rings are ever so slightly different: the crescents on the outer ring have eight decorative divots inside them, the crescents on the inner ones have six. The gold plate has six ribbed gold threads at the bottom,  plaited together two-by-two to create a chevron effect. A spiral twisted gold wire runs down the middle of the plait.

Only ten comparable gold necklaces with stamped embellishment have been found in Denmark, and this is by far the most elaborate, most finely worked of them. It is the only one with a soldered plate with intricate gold thread decoration.

It was discovered by metal detectorist Dan Christensen in October 2021. Christensen works as an archaeological scout for the Southwest Jutland Museums, so when he found the neck ring, he immediately alerted museum staff.  In the week following the discovery, the entire field was scanned with metal detectors in case the ring had been part of a larger grouping of precious objects scattered by agricultural activity. (Previous examples of neck rings from this period have been found in pairs.) Nothing turned up.

A subsequent full excavation of the find site revealed evidence of a settlement under a thin layer of plow soil, including roof-bearing post holes from multiple three-nave longhouses dating to between 300 and 600 A.D. The neck ring was found inside one of the longhouses. It was recovered from below the plow layer, so archaeologists believe it was buried where it was found.

This is an unusual context for gold neck rings, as most of them have been found in wetlands where they were deposited as votive offerings to the gods. The find site is on a promontory surrounded by bogs on three sides, so the fact that this necklace was buried inside a longhouse when wetlands were available a few steps away in every direction suggest it was being deliberately hidden to keep it safe during a period of danger or unrest but the owner was never able to retrieve it.