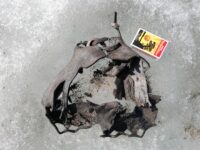 Archaeologists have recovered an Iron Age leather sandal in the melting ice on the mountains of Oppland, Norway. The shoe was discovered by a mountain guide who reported it to the Secrets of the Ice team in September 2019. They followed his GPS coordinates to the find site on the Horse Ice Patch and recovered the shoe along with a textile fragment, leaf fodder, arrow shafts and horse dung. The artifacts revealed the site to have been an ancient mountain pass. Stone cairns indicated the presence of route through the mountains in the area, but its exact location was only identified by the objects revealed by the 2019 melt.

The finds were transferred to the University of Oslo Museum of Cultural History for study and conservation. It was cleaned and reshaped into its original shoe configuration before being freeze-dried for long-term preservation. It dates to between 200 and 500 A.D., and is a shoe of the carabatina type, made of a single ovoid piece of leather laced together through loops over the bridge of the foot. This is not exactly glacier-appropriate footwear.

Would there always have been snow here? Most likely, [glacial archaeologist Espen ] Finstad says. The amounts would have varied, but summer or winter, this was no place for flimsy shoes.

“I do a lot of hiking in the mountains, and you know, I find myself thinking, why would you wear that shoe up here… it’s just very, open. Full of patterns and holes. But it was there. We found it on the ice”, says Finstad. […]

“It looks almost like a sandal. It’s pretty astonishing, we’re up here at almost 2000 metres, and we find a shoe with fashion elements, similar to those found on the continent at the time,” Finstad says. […]

“It’s easy to joke about a roman tourist who didn’t quite understand much about the country he was visiting”, Finstad says.

“But in any case, I believe the people who walked these routes most likely knew what they were doing. They would have worn something inside this shoe that made it work. Perhaps scraps of fabric or animal skin”.

Further investigation of the Horse Ice Patch found three routes, one heading east to the summer farms and two west to the coast. Archaeological materials found at the pass suggest it was in use from the third through the 10th century. A concentration of horse dung dating to 567-979 points to the pass having seen the most active use during the Viking period.