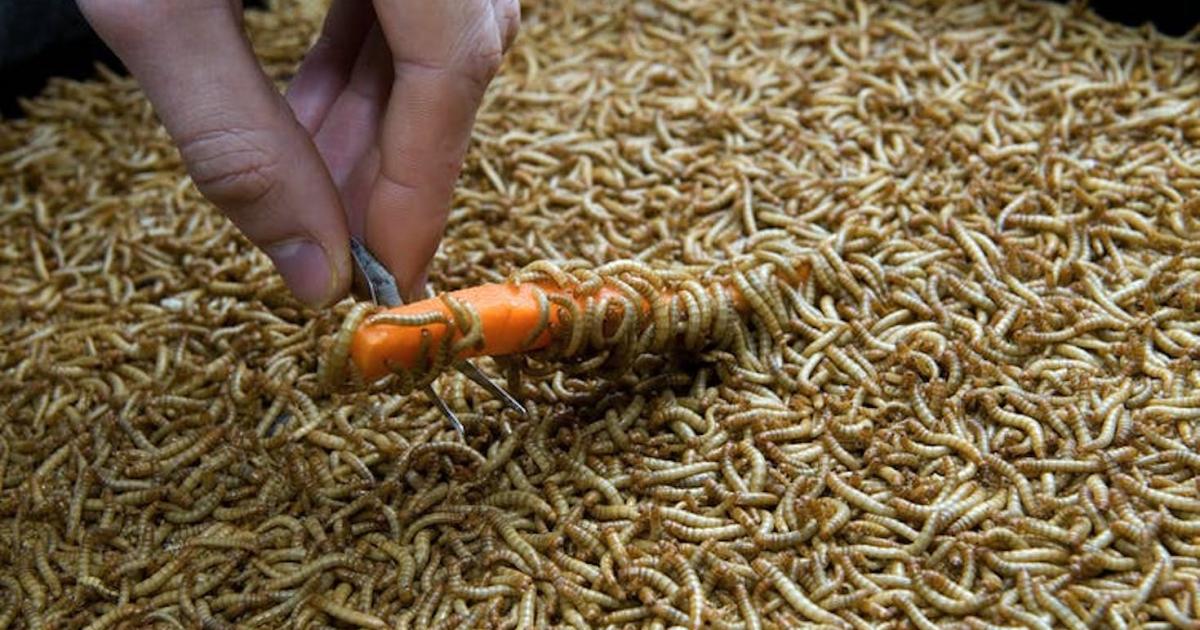 What is the life of a cricket worth?

Insect farming is a rapidly growing industry, with hundreds of companies worldwide rearing insects at industrial scales. The global value of insect farming is expected to surpass $1.18 billion by 2023.

Farmed insects, or “mini-livestock,” refers to insects such as crickets and mealworms raised for the sole purpose of being sold as food or animal feed.

These are not the fried tarantulas on a stick hawked to tourists or scorpion lollipops sold as novelties. High-protein insect powder can be used in foods from breads to buns, pasta and protein bars. Such products are already available in countries including the U.S., Switzerland and Finland.

As an entomologist who has studied the potential and promotion of edible insects in new markets, I have seen how much progress has been made in the past decade in normalizing the idea of eating insects worldwide. Now is the time to evaluate the ethical aspects of insect farming.

The main motivation for edible insects’ rising popularity is environmental. Producing 2.2 pounds of insect protein requires about 10 percent of the feed, water and land used for the same amount of beef production, and releases as little as 1 percent of the greenhouse gases. Insects have a lower environmental impact even compared to other meat alternatives such as dairy, gluten and mycoprotein.

Raising insects on waste products significantly ups these benefits. Black soldier flies can be raised on agriculture byproducts such as vegetable peels or spent grains. The larvae are then used as feed for fish and poultry, recycling waste and reducing reliance on more expensive soymeal and fishmeal feeds.

Besides being big business, insect farms also provide important sources of protein and income for rural households. They can be established cheaply, with little space, and are a boon for smallholder farmers who lack the resources for livestock, all the while sustainably providing feed and fertilizer.

A good example is the “Insects for Peace” program that has helped ex-combatants in post-conflict Colombia with their reintegration. The former soldiers have found livelihood farming black soldier flies, which are used as a feed component for livestock.

An additional bonus is that insects do not evoke much empathy. With exceptions, even vegetarians rarely think twice about swatted mosquitoes, let alone the millions of agricultural pests killed when farming crops.

Those who do mind can rest assured that farmed insects lead net-positive lives, with no fear of predators or starvation. Insect welfare is conveniently easy: While cramped, hot, filthy settings in factory farms are cruel for vertebrates, they are ideal for insects such as mealworms that thrive when crowded together. One can imagine that there are not many requirements to set up a humane cockroach farm, although one’s neighbors might disapprove.

The slaughter of insects is another issue.

Recent surveys of U.K. insect farmers found many are concerned about insect pain perception and providing their mini-livestock a “good death.” The most common slaughter methods large-scale insect farmers use are freezing or freeze-drying, with the assumption that the cold-blooded insects will humanely fall asleep and never wake up.

While insects can and do sense physical pain, they likely do not do so consciously. Invertebrate neurologist Shelley Adamo notes that many insect behaviors are “incongruent” with pain as mammals experience it, citing reports of insects walking normally on broken legs or mantids mating while their partner eats them alive. Entomologist Craig H Eisemann’s influential review of the field, “Do Insects Feel Pain?“, concluded that they are missing too many neurological, chemical and behavioral signs for a pain state.

At their small size, insects can be reduced to powder almost instantaneously, before they could sense any pain.

Nonetheless, scholars such as Eisemann and other advocates agree that insects should be farmed and killed with the assumption that they do feel pain. That means the slaughter method should be as quick and painless as possible.

While certainly less potentially painful than boiling, as extreme heat is known to induce pain responses in insects, freezing is slow. Shredding is a popular alternative: At their small size, insects can be reduced to powder almost instantaneously, before they could sense any pain. Current surveys suggest public perception of pulverization is still negative compared with freezing, but insect farmers increasingly view it as the more humane choice.

The low probability that farmed insects suffer pain, if they can “suffer” at all, combined with the environmental and social benefits of insect farming, caused philosopher Chris Meyers to argue that eating insects is not only morally acceptable but also morally good.

This idea gave rise to the term “entovegan.” As pescatarians follow a vegetarian diet but still eat seafood, entovegans happily eat arthropods, secure in the knowledge that their diet is both sustainable and ethical.

How much are insect lives worth?

What gives some strict vegans pause is the sheer number of insects involved.

In a 2020 preprint, animal welfare activist Abraham Rowe calculates that 1 trillion to 1.2 trillion individual insects are farmed annually for food and feed, not including harvested wild insects. On average, 79 billion to 94 billion farmed insects are alive on farms globally in any given day, compared with only about 22 billion chickens, Earth’s most popular meat.

So, how valuable is an insect’s life compared with a plant’s or a bacterium’s? Capacity for consciousness is a popular metric for determining if an organism has moral standing, even though there is no agreement on how to actually measure that.

If one assumes, hypothetically, that insects are 0.1 percent as sentient as cows, or that the probability that insects can suffer is 0.1 percent, then killing 1,000 crickets has a similar ethical footprint as killing one cow. That may seem generous, yet in his guide “How to Reply to Some Ethical Objections to Entomophagy,” philosopher Bob Fisher calculates that one cow produces as much meat as 900,000 crickets.

The math changes, however, when one considers how many animals die in agricultural fields: Conservative estimates place at least 10 million invertebrates per acre of crops at risk from pesticides, as well as thousands of small, undeniably conscious vertebrates such as mice and rabbits at risk from mechanical harvesters. This math adds millions of deaths not only to traditional meat production through the fields of feed, but also to almost any cultivated crops, including soy. To quote biologists Charles Nicoll and Sharon Russell, “There is no such thing as a bloodless veggieburger.”

Fisher calculated that the number of insects killed to produce a plant-based diet or an insect-based diet are about the same, meaning entoveganism and veganism are in that sense equivalent. Eating insects raised on organic wastes, all but eliminating the environmental and animal death costs of plant farming, may be the best option of them all.

The rise in insect farming means questions about insect sentience and slaughter are no longer just philosophical: The well-being of trillions of creatures is at stake.