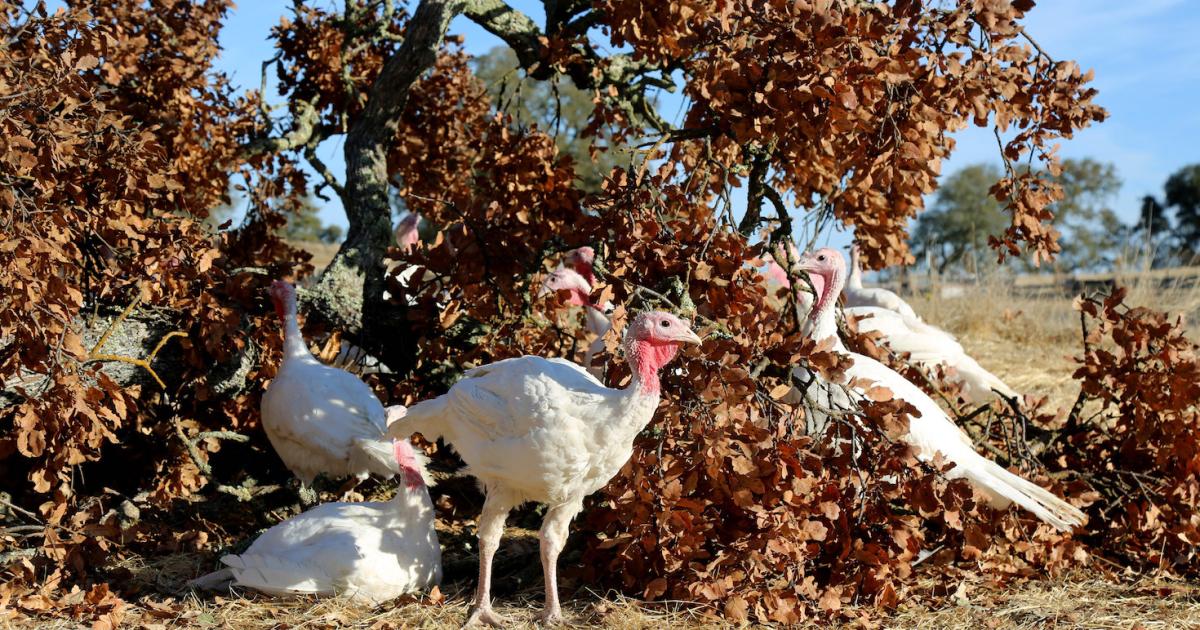 There will be many types of “turkey” on Thanksgiving tables across the country this year.

With the rise of plant-based products and the people who identify as following plant-based diets, turkeyless turkey, like tofurkey, is bound to have a resurgence. According to Forbes, an estimated 4.5 million plant-based turkeys will be served Thursday. Elsewhere, meat consumers might be looking towards heritage breeds, endangered domestic turkeys that are more similar to the native species and that have not been bred for maximum white breast meat, or free-range organic fowl that are both more ethically raised and are bred for better taste and texture.

There is a new option on the menu this year, the so-called “regenerative turkey.” Cream Co. Meats, the largest distributor of meat from ranches engaged in sustainable farming practices in California, and PT Ranch, an organic and regenerative farm in Ione, California, have collaborated to bring to plates the state’s first turkey from a verified regenerative ranch this year. Available in California, the bird is also sold online on Cream Co.’s  direct-to-consumer website.

While there is no exact definition covering regenerative agriculture and animal rearing, according to Cream Co and PT Ranch, it comes down to measuring the practices used to raise the animals to maturity. The ranch is measuring the amount of living organisms in the soil, of live canopy, bare soil, wind and water erosion and other ecological indicators of a health system.

Most important, these measurements will be done independently, which sets PT Ranch apart from other farms that are simply certified and don’t have a third party coming out to check and take measurements over time. PT Ranch is Ecological Outcome Verified (EOV) by the Savory Institute, which enables it to make the regenerative turkey claim. The organization takes soil samples to track the farm’s soil health, biodiversity and ecosystem function for improvements. EOV has also verified a turkey from the regenerative ranch White Oak Pastures in Georgia.

“The science around regenerative agriculture is not in consensus,” said Molly Taylor, manager at PT Ranch. “A producer can’t point to one metric and say, ‘See, I’m doing it.’ And I think that’s what everyone’s searching for right now. Where’s the proof in the pudding? And, frankly, it doesn’t exist. The best that we can do is go out and collect these data points that we’re currently collecting. But it’s just painting a picture. And that picture hopefully is multifaceted enough that it can capture the social benefits, the community benefits, animal welfare benefits and effects on groundwater quality.”

“The birds are also providing nitrogen in the form of their manure,” Pollard said. “We are actually improving the topsoil and increasing the organic matter in that soil.”

The farm also has planted 6,000 trees and encouraged native monarch pollinator friendly species on the property.

PT Ranch’s baseline EOV evaluation in 2020 indicated “the land has ineffective ecosystem processes with a significant departure from ecoregion’s potential.” The Taylor family regained control back of the entire ranch from renters in that timeframe and is intent on making improvements with the understanding that even with the best in class regenerative methods, it takes many years to create better soils and many other factors are involved. Drought, such as the one California is in, can impede even the best regenerative efforts.

“The baseline study is supposed to be a starting point,” said Taylor. “You’re not allowed to remain in the EOV program and carry the seal if you’re not showing at least some improvement.”

Already, PT Ranch’s regenerative practices seem to be paying off. The 2021 report, which represents Year 2 from the baseline, showed significant improvement with a few pastures moving into the range that indicated “the land has a reasonable ecosystem function or greater with little departure from the ecoregion’s potential.” Other improvements included moving from a lack of live canopy abundance, microfauna and pervasive bare soil to good live canopy in most areas, living microorganisms in the soils and little bare soil. It can even been seen in the photos that show a drastic change from brown, dry grass to much more green coverage.

The big difference between sustainable and regenerative, we feel, is the measurement.

These short-term evaluations happen every year, and PT Ranch will have other longer term data points evaluated and measured again in 2023.

There’s controversy over whether any meat consumption can be considered sustainable and thus truly regenerative. But there is evidence that the tactics employed by PT Ranch can make rearing animals for consumption a positive for the planet. Grasslands that are too often converted into crop or grazing land could store up to 30 percent of the Earth’s soil carbon. So farmers are engaging in rotational grazing by letting some areas sit undisturbed to regrow and sequester more carbon. Regenerative forms of grazing also allow the cows to act similarly to how they did naturally, recycling nutrients back into the soil. All of this increases the health of the soil and the amount of carbon stored.

PT Ranch’s birds range from 12 to 14 pounds and sell for $99 (about $8.50 per pound). That is a mid-range price for specialty turkeys, when you consider that some heritage birds cost upwards of $150 for similar size. But grocery stores can sell conventionally-raised frozen turkeys for under a dollar per pound. According to Pollard, the cost increase comes from the expenses needed to raise a turkey outdoors.

“When you have [turkeys] in a barn, you’re able to give them what they need from a growth point of view,” Pollard said. “You could administer antibiotics, put the feeds right in front of them, keep them exactly at the right temperature, and provide direct water to them. Control their environments, that’s going to be the most efficient way to raise any sort of poultry animal. So when you remove animals from that sort of environment, and you give them a more natural living habitat, it’s more expensive.”

Meats distributed by Cream Co.’s are raised outdoors and never have antibiotics, hormones, GMOs, additives, nor are they subjected to unsanitary or overcrowded living conditions — hence the price hike. According to Pollard, consumers are willing to pay for the higher quality taste, a better life for the animal and also for a potentially positive impact on our climate crisis.